Though area code 313 never will be mistaken for 305, Detroit just got a tiny bit more like Miami. 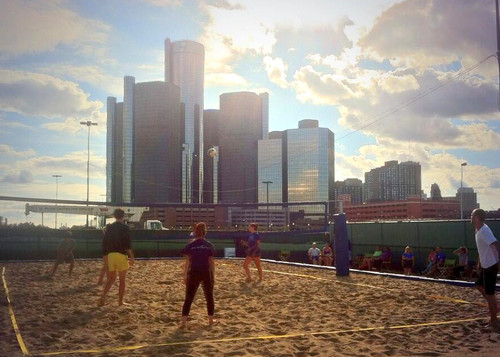 The court next to Rivard Plaza is open Monday and Thursday evening, as well as Saturday afternoons. [Photo from Detroit Regional News Hub]

In addition to a sandy playpen for adults with a Beach Bar and Grille at Campus Martius Park and lunchtime yoga that started last week at waterfront Milliken Park, now there's also a regulation-size sand volleyball court along the downtown riverfront.

It was dedicated and hosted the first games late Monday afternoon by the Detroit RiverFront Conservancy and a recreation group called Come Play Detroit at Rivard Plaza and Pavilion, along the RiverWalk at Rivard and Atwater Streets.

Volunteers will monitor the court from 6-9 p.m. on Mondays and Thursdays. Volleyballs can be borrowed through a driver’s license or valid ID. There's a one-hour limit if others want to play. Visitors with their own volleyballs can use the court from noon-3 p.m. on Saturdays.

Other amenities through September along RiverWalk between Rivard and the GM Renaissance Center include Adirondack-style chairs in bright colors, chaise lounges, sling beach chairs, picnic tables and sand toys, according to the conservancy. It's part of what's awkwardly called Placemaking. (We won't use it often, promise.)

If visitors crank up Latin beats, wear thongs and bring beverages that may not actually be allowed, it almost could seem very slightly like South Beach. Without palms.