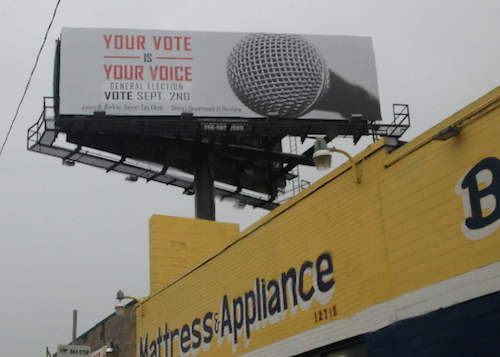 Update: Monday, 5 p.m. -- The City Clerk's Office told Deadline Detroit that the printer for the billboard company made the mistake and the city had correct date. The clerk's office said at least two of the eight billboards they put up promoting the general election had the wrong date.

Jeffery R. Sieving, a lawyer for the International Outdoor, the billboard company, provided a statement: "Needless to say this mistake was unintentional and a failure of our own internal copy approval process...The mistake was brought to our attention by the clerk that same day. At no cost to the taxpayers, we are correcting the problem and shall have, weather permitting, the correct Nov. 5th date displayed by tomorrow.

In yet another in an ignominious series of missteps, the Detroit Department of Elections is coming under fire for putting up billboards that contain the wrong dates for the upcoming general election.

Deadline Detroit columnist Darrell Dawsey photographed two of the billboards on bustling eastbound E. 8 Mile Road. Others have been spotted on heavily traveled thoroughfares such as Gratiot and Kelly Road.

When contacted by Deadline Detroit, a source at the Department of Elections  said that the clerk has been notified of the error and that it is their billboards. The source said steps are being taken to have the billboards corrected by tomorrow. The source did not say how the long the billboards have been up, what led to the mistake or how much the fix is going to cost taxpayers.