Adolph Mongo: Warts and All, Bourdain's Show Good For Detroit

I grew up in the projects of Royal Oak Township in the 1960s. Most of the people who lived in this predominately black enclave in southern Oakland County were poor. And the community today is still struggling in one of the richest counties in the country. A large number of black men who lived there worked in the auto plants during the heydays of the 1960s and 70s.

Every other week, there were white people driving down our streets and taking pictures of the tattered white, brown and green projects that were scattered throughout the community. My mother would make us sweep the dirt off the sidewalks whenever white people stopped to take pictures.

We had to use coal and wood to heat the furnace in the winter.  Many of the white kids in the Oak Park School District where I attended junior high and high school, called our homes, “cardboard village.” We hated to be made fun of. Hell, even the black kids that lived in decent housing across Wyoming Street, made fun of our living conditions. They attended the Ferndale School District. 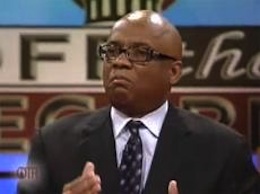 The black middle class kids from across 8 Mile Road, in Detroit, always ran us away from the Johnson Recreation Center swimming pool on hot days. So we had to hang together in great numbers to gain entry into the pool. We couldn't use the pools in Oak Park or Ferndale because of residency restrictions. But we knew it was really because we were black.

Every summer, white college students, from federal programs, such as VISTA, came to the township to help the so-called disadvantaged children and families.

VISTA was a national program that was similar to the Peace Corps. I remember my mother saying that we were like mice in a lab that were being studied by everyone. And yet many of the problems that brought those students to our community were never solved. They were there to get college credit.

That childhood scenario is happening in Detroit today.  A city that is bankrupt with darken streets, failing schools and crime-ridden neighborhoods, has attracted the attention of the world.

This past Sunday, Bourdain's "Parts Unknown", aired one of the most compelling and probably the most accurate look at a city that many Detroiters want to ignore. His take on Detroit has pissed a lot of people off for all the wrong reasons. I say it’s about time to get pissed off. But get pissed off for the real issues.

The famous quote from the best-selling novel, Invisible Man, by Ralph Ellison, could be a quote that describes the people in the neighborhood.

”I am invisible, understand simply because people refused to see me. Like the bodiless heads you see sometimes in circus sideshows, it is though I have been surrounded by mirrors of hard, distorted glass. When they approach me they see only my surroundings, themselves or figments of their imagination, indeed everything and anything except me.”

Bourdain’s program gave those invisible people and those forgotten areas of the city a face on Sunday. He didn't label those burned out and abandoned houses, or empty auto plants and buildings a Heidelberg project. Bourdain called it like should have been called, an American tragedy.

And that was the Detroit that was shown to the world.

And yes, it wasn't a pretty sight seeing neighborhoods that are being not just  neglected, but also systematically wiped out by those leaders from Lansing and the private sector.

While they are determined to create a utopia downtown, in midtown and in Corktown, they have refused to see and acknowledge the death and destruction that is taking place everyday in many of Detroit’s neighborhoods.  These developers and politicians have turned a blind eye to the suffering of the people that have to live in these areas.

Every Tom, Dick and Harry from around the country has taken the city woes and made fun of them, or studied them. They are like scientists, trying to get a sense of how this city got in trouble, trying to show the world a city that was once called the cradle of democracy, and how it has become a tale of two cities, one that is  poor and black and another that is white and booming.

Yes, Detroit is the laboratory of America.

Yes we need to get pissed off. But not because Parts Unknown didn't go to Slows, or to Rosedale Park or talk with Dan Gilbert or hang out in Midtown or eat at the Roast. Or spotlight Gilbert’s private playground, Campus Martius.

We need to get pissed off at the broken lighting system that blacks out major streets and most neighborhoods at night.

Don’t you ever wonder why we have so many hit and run fatalities?

We need to get pissed at emergency manager Kevyn Orr, who wants to cut fire and police pensions for a police department that is already woefully understaffed.

We need to be pissed off that out school system has been destroyed and that the children who are left,  risk their health and safety everyday when they walk to school in the dark.

What about the endless number of murders, are we pissed off at that?

And lastly, until we get a handle on crime, those black and white Detroiters who want the world to see the best parts of the city, need to stop turning a bind eye to parts of the city everyone wants to disappear, because it won’t.

You can lock your mentally impaired brother in an upstairs attic, but everyone including you, knows he is there.

I wasn’t embarrassed that Bourdain showed a basement restaurant or a makeshift barbecue stand on the streets. The food probably taste better than the restaurants that sells ribs downtown.

I wasn't embarrassed that the show highlighted people who used liquors stores as grocery stores because that is all that is left in those neighborhoods.

I wasn't embarrassed that the old Packard Plant was being maintained by one smart, elderly white guy, and that if the city and state was really serious, that plant would have disappeared back in the 1950s.

Now maybe someone will get off their asses and tackle the problems in the neighborhood.

We can’t get mad when people call our city Chernobyl, Somalia, Beirut or World War II Berlin. Detroit by any other name is still Detroit. Thank you, Anthony Bourdain.