“It’s unfortunate to lose an icon like that,” Joe Kohn, a spokesman for the Archdiocese of Detroit., tells the Free Press.

Kohn said the steeple likely will be removed and a new roof put in its place. . . .

“It’s not damaged beyond repair, but it would be a huge expense [to restore] and well beyond what the parish budget can handle,” Kohn said, noting that the congregation has 850 families.

The steeple of St. Josaphat Church along I-75 could be seen swaying in the wind Monday, Mike Stechschulte reports in the Michigan Catholic.

Detroit Police had the intersection of East Canfield Street and the Chrysler Freeway Service Drive closed Monday afternoon as a handful of onlookers stood across the street from the 112-year-old structure. The main steeple of St. Josaphat could be seen leaning to the church’s southwest side, and shingles and pieces of the tower had been blown off by the wind. 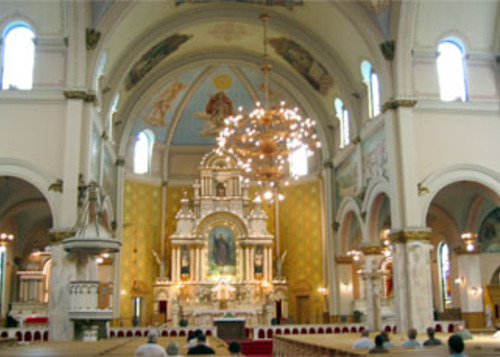 St. Josaphat is part of the old Polish neighborhood that features a landscape of old steeples on the East Side of I-75, along East Canfield, including Sweetest Heart of Mary and St. Albertus churches. The neighborhood was the portal through which Polish Americans arrived in Detroit in the last three decades of the 19th Century.

When driving south on the Chrysler Freeway from I-94, St. Josaphat's steeple lines up at one point square inside the middle of the Renaissance Center in the distance.

The church is named after St. Josaphat Kuntsevych, a Greek-Catholic priest who was appointed archbishop of Polotsk, Poland, in 1617. He was martyred in 1623.

In 1901 this late Victorian Romanesque style church was completed by Joseph G. Kastler and William B. N. Hunter. Local carpenters, Harcus and Lang and the Jermolowicz Brothers, were the builders. The church also features some gothic and Baroque details.

St. Josaphat Church is built of a red orange brick and is trimmed in Bedford Indiana buff limestone. The stained glass was crafted by the Detroit Stained Glass Works. The church is 132 feet long and 56 feet wide. The ceilings are 65 feet high and the seating capacity is 1200. The main steeple is 200 feet tall while the side steeples are each 100 feet tall.

All of the sacred images of the church are illuminated by a myriad of tiny light bulbs. The church was originally built with both gas and electric which can be seen by observing the fixtures throughout the church At the turn of the century there was a great fascination with the electric light bulb, which is clearly witnessed in St. Josaphat Church. 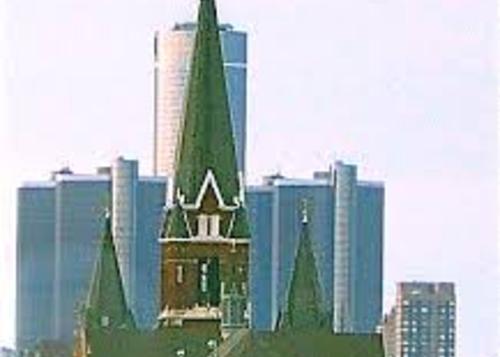 The church features a notable collection of murals on the ceiling and walls. In addition to images of such traditional scenes as  the Holy Trinity,  Nativity and the Last Supper, there are also murals of a Pilgrimage to Czestochowa and a battle during World War I between Polish and Russian forces. (The Poles won, thanks to the "miraculous intercession of the Blessed Virgin Mary," accrding to the church website.)

Historic St. Josaphat is part of the newly merged Mother of Divine Mercy Parish, which also includes nearby Sweetest Heart of Mary and St. Joseph in Detroit.  St. Josaphat also holds regular masses in Latin, which was discontinued as the language of the church in the late 1960s, after nearly 2,000 years.