Despite Praise From Many Officials, Online Comments Rip John Dingell 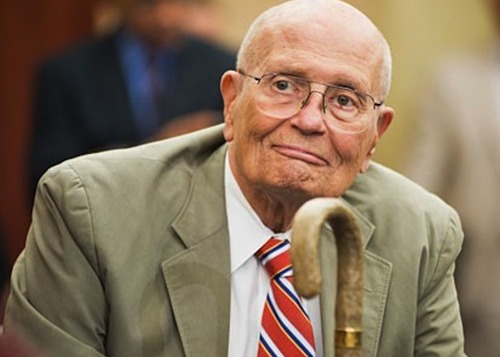 While fellow politicians, friends and media outlets praise U.S. Rep. John Dingell on the day he announced his retirement after 58 years in Congress, online commentators are having a field day ripping Dingell, his legacy and even his wife, Debbie, who is widely expected to run to replace him.

Criticism might be expected from the cauldrons of incivility that are the comment sections of the Detroit News and Free Press, but the caustic reactions also are filling the comment areas following stories about Dingell in the New York Times, Washington Post and Politico, the online publication that specializes in coverage of national politics.

Some of the attacks seem partisan in nature, but that raises a question: Where are the Democrat commentators?

What follows is a sampling of the commentary about Dingell:

From The New York Times:

They imagined that voters would periodically elect one of their peers; farmers, merchants & mechanics - to spend a few weeks or months gathered together at the capital to vote on laws to govern them. Certainly not ossified relics such as John Dingell.

Kathy, Washington
if this article re the retirement of an 87-year-old senior is suppose to make me feel all warm and fuzzy inside, it doesn't! it brings home the reality of why our government struggles with commanding the respect of American citizens. there are probably only a handful of seniors of his age who can and are willing to adjust to changes and think outside the box and, THEY ARE ALL DEAD! get this man out of a position that is vital to America's wellbeing!!!!!

Steve, Manhattan
Jack - Hard for me to determine if Dingell was a "responsible" representative. I guess if you last 60 years the obvious flaws like being corrupt can be ruled out. However in reading the Times Article they make reference to the fact he was chairman of a Energy Committee etc...

Not sure how long he chaired it, but I have always said that our Country has failed miserably with respect to adopting a coherent, consistent energy policy. Decades of wasted time and we still rely too heavily on foreign sources of Energy. Things appear to be getting better on the import oil and renewable energy front, but if Dingell had a hand in what's transpired energy-wise, I'd say he was one big failure.

E.T. Bass, Salt Lake City
He recently had serious competition, in a primary, by a young lady. He actually had to campaign and listen to a lot of people. It was terrible, it cut into his duck-hunting schedule. Well, when his wife takes over, he can use his cell phone in the duck-blind, thank God. /sarc/

carlo
Let me get this straight. He succeeded his father, then he held the seat for 60 years, and now his wife will run for the seat. He says "I don't want people to say I stayed too long"!
There outta be a law-a number of them actually but I don' think the Dingell family would vote for them.

sproul
Dingell is, to state it bluntly, a putz. He is an ideal poster boy for nepotism, cronyism, and intolerance. He has always treated his seat in Congress as if it was his by virtue of divine writ. I find it highly likely that the actual reason he's finally leaving is he just can't act like he gives a rat's rump about the unwashed masses any more. Good bye and good riddance....................

jlm656
I can remember the Dingell of 30 years ago -- at that time he had established his reputation as an intolerant, hard-nosed partisan; a man who was obnoxious to both his enemies and his friends (friends consisting of campaign donors, a few members of his staff and people who had never met or heard of him). He was reportedly feared by all and despised by most. Perhaps age has softened him, or perhaps he finally met his match in Nancy Pelosi, another ruthless partisan, who simply wore him down.

But he is retiring - no need to heap approbation on him at this point. Farewell John Dingell, and we will see how history remembers ye.

Skunk at the picnic
Dingell: I hate Congress so much I stayed there for 60 years and want my wife to take over my seat.

kaizersozhe
Be easy on the poor old geezer.

Consider how much better off his district (including parts of Dearborn and Detroit) is today compared to 60 years ago.

JMH21
You can be sure that this will cause and intrafamily squabble. His wife Debbie wants to run for the seat and his son has been waiting in the wings for years. But you can be sure they intend to keep the seat in the family because that is what politicians think they should do these days.

DaveGideon
Maybe the voters in that district will choose a living person to represent them now.

Janice Karzaki
Thank goodness, it's about time. When he asks quests at a hearing, he has to be given twice the time of other as it takes him so long to speak. He should have retired a decade ago.