Guest Column: ‘I Don't Want My History To Be Erased’ With Detroit Demolitions

Hood, 41, has a master’s in community development from the University of Detroit Mercy and a marketing degree from the same school. She is director of Deep Dive Detroit and on the board of Preservation Detroit. 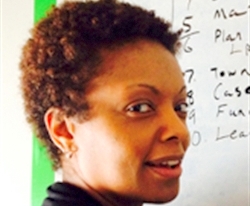 Lauren Hood: "When I was growing up, every house on the block was occupied."

On my way home this week from a presentation about deficiencies of the widely accepted future plan of the city, held near the northwest Detroit neighborhood I grew up in, I decided to drive by the old family home. Usually when people talk about the old family home, they’re talking about a time decades earlier. This was my family home until a year ago.

I do this every few weeks since my parents left. I’m kind of just checking on the Pinehurst Street place, in the back of my mind daydreaming that I’ll one day buy it back from the dude who paid half the asking price and now rents it out for less than half of what I pay in Midtown.

I always get a little emotional when driving by, but this time more so than usual.

When I was growing up, every house on the block was occupied. On last month’s drive-by, I saw the first vacant home on my street. I took a picture of it with my phone to show my parents this anomaly, because as I said, in the 45 years that my parents lived on that street, there were no vacant homes.

In this week’s drive-by, I saw three vacant homes on my street near 7 Mile and Wyoming. (Yes, although I haven't actually lived on that street for some time, its still MY street!)

It's not just that the homes looked empty and there were no cars in the driveway. These homes had wooden boards on the doors and windows and words spray-painted on the front, denoting that the utilities had been cut and the homes were OK to be demo’ed. I cried.

It seemed completely irrational that the sight of vacant buildings made me cry. I'm working on a massive vacant property and demolition project and see blight all day long. It couldn’t have been just the sight of boarded-up buildings that made me so sad.

Detroit blight-removal scene from a past year is posted on Flickr by "Bourbon Baby."

In thinking about it a little more, I realized I was sad because I remembered the people who used to live in those houses. I felt like if they were torn down, somehow the memory of those people would be erased in some sort of “Eternal Sunshine of the Spotless Mind” kind of way. I worried that if I didn't buy back my parents’ house soon enough, it too might have to go.

There has been a broken window on the front of the house for about six months. If a window had been broken on my mom's watch, it would've been fixed within the week.

It's only going to get worse. If that house gets demo’ed will people ever talk about the Hood family that lived there and how well they took care of the place, and picked up the trash on the street and repaved the sidewalk in front of the house, and the award-winning landscaping they would do, and how friendly they were and their weird daughter and the crazy white people music she'd be blaring out her windows in the summertime?

I was and am sad because I don't want my history to be erased.

I'm sure I'm not the only native Detroiter who feels this way and this revelation reaffirms for me that everything happens for a reason. There is a greater purpose for why I ended up working where I work on my current project. I hope I do the right things.

A coyote hanging around the golf course at the Lochmoor Club in Grosse Pointe. Quite the site to see up close.