Blues Venue John's Carpet House is Back After Being Shut Down 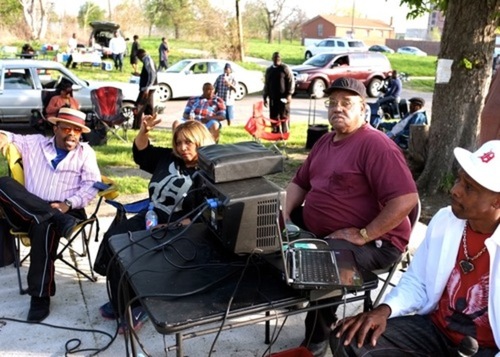 A Deadline Detroit photo taken in May.

John's Carpet House, a grassroots blues jams held every Sunday in an open field on Detroit's east side, returned this week after police shut it down last month for not having the proper permits, the Detroit News reports.

Louis Aguilar of The Detroit News reports that fans hope the venue at St. Aubin and Frederick has dealt with the last of its troubles with the city. The place operates every Sunday from May to October.

Aguilar writes that on Sunday the vendors were gone, so Barrow hopes that settles the situation.

People signed petitions to save the venue and took it to the city council. Barrow went before the council last week and explained that had bought the property from the city several years ago. Some fans who are attorneys offered to help, the News reported.

“A few years ago, the city told me I don’t need any permits and now they’re saying I do, so I went to remind City Council that I didn’t,” Barrow told the News.

On Sunday, the vendors were gone and Barrow hopes that settles the situation.

“To me, it’s resolved but I hope the city thinks so,” he said.

On July 27, this was posted on its Facebook page:

We are back on Sundays. Hopefully all is well. Sorry for last Sunday.. . . . A big thank you to all of the peoples who call in to our city officials and posted on social medias demanding that we be allowed to operate on Sunday. All I can say is the response was awesome.

About four or five years ago, Barrow said, the city had made similar demands about permits. One patron of the jam was a practicing lawyer working for the state attorney general at the time. She helped Barrow through bureaucratic hurdles and licensing processes, which led Barrow to buy all the land outright.

"Now they've got something new," Barrow told Deadline Detroit last month. "They say we need an entertainer's license—they ain't never had that before. And they say the food vendors, they have permits but not licenses or something—I don't know, they shut everybody down."

Crowds gather on lawn chairs, on coolers and on blankets, in a wide open ring around a makeshift stage on Pete's land, where a stable of venerable Detroit musicians have been playing blues, soul and R&B tunes every Sunday for years. Famous names from Motown and soul music's past and present have been known to show, including Smokey Robinson and members of the Contours and Dramatics.