A Wayne State grad student's research tells a revealing story about who's active in high-profile efforts to revive Detroit. 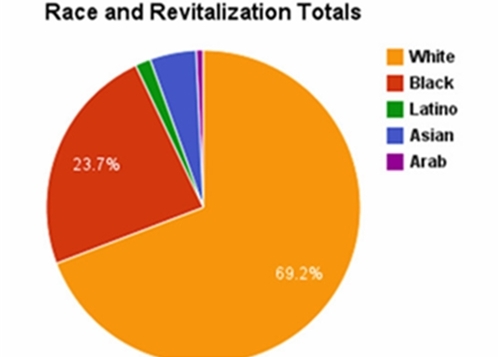 The results, posted at his blog and a Detroit Data site, put the first evidence behind a sense of racial imbalance in private and nonprofit organizations working to reshape the city's economy and career opportunities.

"Detroit's recovery, while exciting, is also deeply unequal," Hill writes at the start of his presentation. He concludes there is "a deliberate, racially unequal distribution of support and funding."

Overall, as shown at right, nearly 70 percent of Hill's 818-person sample is classified as white. Almost 24 percent are black, about 5 percent are Asian,1.6 percent are Latino and 0.7%  are Arab.

[Note: D:hive and Detroit Creative Corridor Center dispute the data for their programs. Figures from each follow the bulleted list.)

These are the nine categories and majority races in each as of Aug. 31:

►Update 1: According to Jon Chezick of D:hive, "the BUILD class has actually graduated over 400 budding entrepreneurs of which 56% are black and 32% are white."

►Update 2: According to Matthew Clayson, director of Detroit Creative Corridor Center, "45 early stage design businesses are enrolled in and/or have exited the Creative Ventures Residency. Collectively, these firms have or had 70 founders. The racial breakdown of the founders of each firm are 42 white (60%); 23 African American (33%); 2 Asian American (3%); 2 Arab American (3%); 1 Latino (1%). (More of Clayson's response is posted among comments below this article.)

Pie charts by Hill show all five races for each group here, along with five paragraphs on methods for his three-month project. An Excel spreadsheet with complete data is here.

"I'm considering a follow-up piece to address some common questions and responses," he tells Deadline Detroit via email. 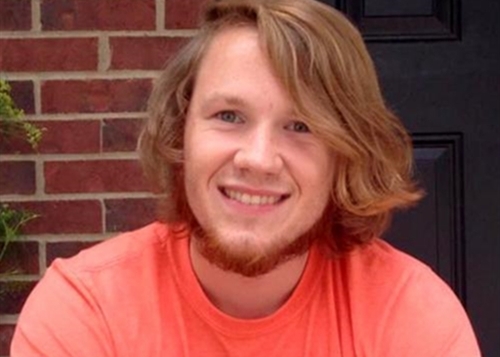 Hill, a 2009 Michigan State grad in his late 20s, is pursuing a master's in medical anthropology at Wayne -- though these numbers aren't crunched for a class project. He did it as a volunteer participant in the Detroit Data online collaborative, "created to address the issue of open, open data sharing among Detroit's growing civic tech and data community."

The young statistician is more than a just-the-facts data geek. At his blog, the married student describes himself as "a suburban American middle class 'white’ man. . . . I recognize my privilege in this world and will continue to try to understand what I see."

A good indicator of the racial inequality [in Detroit recovery efforts] can be seen in who gets accepted to incubators, who is selected for fellowships and who is running the various programs and organizations working to revitalize Detroit. . . .

In the 2010 Census, Detroit had a population of 713,777 people, of which a majority (82.7%) were black or African-American. These numbers are not reflected in Detroit's revitalization efforts. . . .

There is potential for Detroit to become the test case for racial equity in urban centers. Detroit is at the very beginning of its efforts to revitalize and reinvest. During this period, it is critical to ensure there is a structure that promotes equity in training, hiring, bidding and selecting individuals who are the city’s present and will be its future. This is the critical moment where Detroit should try to lift all residents, and not just those who can drop multi-millions for an expressway ramp or swoon decision-makers with a new stadium plan. . . .

If the city pushes for a strong community based redevelopment model from the bottom up, it could allow for a more racially equitable path forward. The city and its various supporters need to both ask Detroiters what they want to see in their communities and give them the tools, training, and support to make it happen. There is no reason that community development can’t also lead to citywide revitalization.

Addressing a reader who accuses him of "using statistics to score a white privilege zinger," Hill replies:

Black-owned businesses and innovators in Detroit have unequal access to accolades and funding. Black ventures aren’t often recognized for contributing to Detroit’s economy and turnaround.

This is just the truth. Yes. "New" means White. "New" means Black People are not a part of the plan, especially... http://t.co/ADC8FExQUb

These reactions are among 26 comments in a Reddit discussion:

Aaron Foley, Detroit journalist: "There are already more white-owned businesses in Detroit than nonwhite ones, even before startups and incubators came along. The concern, IMO, has always been two things: The recognition that nonwhite businesses don't get for their contributions, and the access nonwhite business owners have to the type of capital that is powering the revitalization."

Deadline Detroit welcomes other responses to Hill's research, particularly from those involved with programs mentioned. Comments can be added below or at this article's thread on our Facebook page.