“I haven’t had a hair cut in quite a few years,” he said, adding that he had been covering up his bundle of hair with a hat.  “I’m happy. This is great.”

Ballenger was just one of dozens who took advantage Monday of free haircuts being offered at the Downtown Synagogue on Griswold in Detroit to the homeless and seniors – and for that any matter anyone who really wanted one. The haircuts were being offered from 10 a.m. until 7 p.m.

In this case, the joy was just as great in the giving as the receiving. 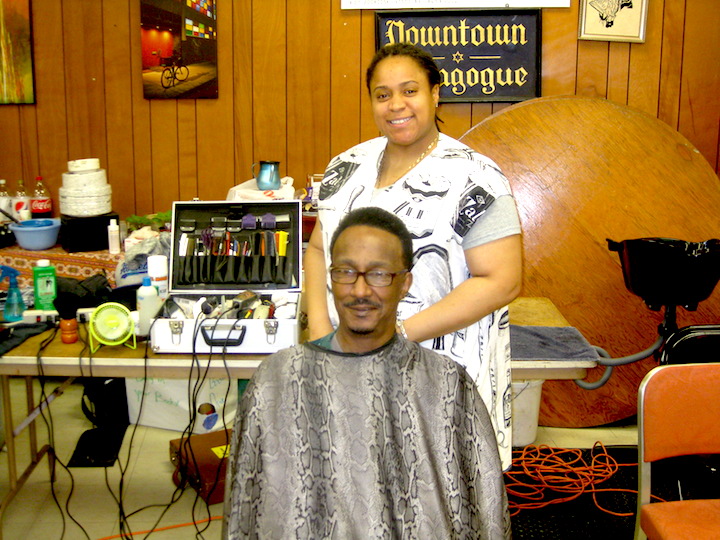 “I love it, “ said Senika Courtney, a barber college student (pictured above with Ballenger), who cut Ballenger's hair. “It’s my passion. Cutting hair, interacting with people. Making a difference. When they get a haircut they feel like a million bucks.”

If anything, in a season of  insatiable consumerism, and concern about getting the best holiday gifts, it was nice to see a spirit of giving, particularly to a group of people with so little.  That little only seems all the more magnified during the holiday season.

The event  was dubbed, “Grooming on Griswold,” “in the spirit of caring for others, love, advent and thanksgiving.” Sponsors included the Downtown Synagogue, the Archdiocese of Detroit, the Urban Bean Company, the Social Club Grooming Company, Our Lady of Rosary Parish, St. Aloysius Parish, Sacred Heart Parish and Shelters of Love.

At around 2 p.m., more than 30 people had already gotten haircuts, the barber chairs were all filled and 13 people were waiting to get a snip on the first floor of the synagogue.

Sebastian Jackson, owner of the Social Club Grooming Company on the Wayne State University campus, who was snipping away at one the barber stations, says haircuts are more than just haircuts.

“Everybody here has a purpose and sometimes we forget our purpose,” he said. “ Haircuts restore value. That kind of gives us that feeling to understand our purpose.”

Anna Kohn (pictured here) , program and development director of the Downtown Synagogue said one person who got a haircut said “Nobody ever touched my hair before.”

“This is my favorite thing we’ve ever done,” Kohn added.

The event was the idea of Josh Greenwood, owner of the Urban Bean Company, which is just a few doors down from the synagogue on Griswold.

Greenwood said he got the idea after watching 60 Minutes and seeing a guy give free haircuts in Central Park.

“His only requirement was that you had to give him a hug,” Greenwood recalls. 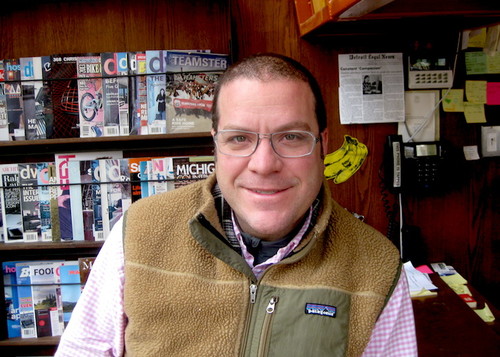 Greenwood (pictured) said he’d like to make the free haircut thing a monthly event, but he’d settle for a quarterly schedule.

He said he also wants to look into giving free dry cleaning for the needy, and possibly getting portable showers.

“Everybody deserves to be clean,” he said. 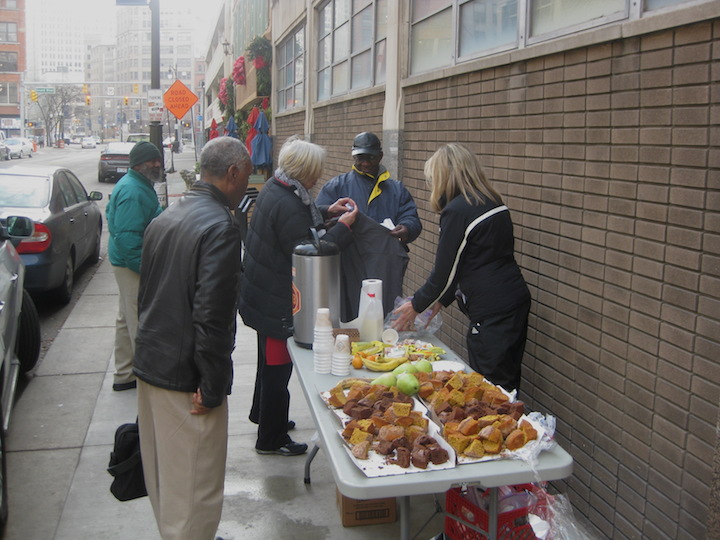 Free refreshments were provided on the street outside the synagogue.