After one year in office, Detroit Mayor Mike Duggan still sounds confident and resilient and determined.

The reception by the citizenry during his first year in office has been generally very good, and coverage by the media has been, for the most part, very positive.

Things aren’t perfect. Crime is still too high. The bus system is still shamefully inadequate. Many neighborhoods still look emaciated. And some reporters have quietly grumbled about the administration sometimes not being transparent enough.

But Duggan has deservedly gotten a rep as a can-do mayor and an innovative one at that. Street lights are being turned on. And people are getting better services, from police and EMS to buses.

All in all, he’s still enjoying a pretty nice honeymoon. 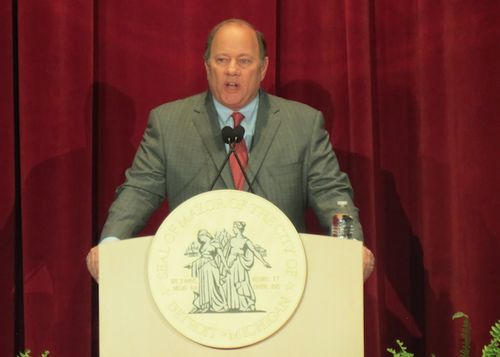 Mayor Duggan delivers the State of the City address

And now that Emergency Manager Kevyn Orr has rode off into the sunset, he’s the real Detroit mayor, 100 percent. The praise and blame no longer fall on Kevyn Orr.

On Tuesday night before an upbeat, invite-only crowd that packed the Redford Theater on Lahser near Grand River, Duggan delivered a confident, uplifting speech, in which he said:

"Detroit is now on the road to recovery."

The symbolism wasn't lost that the speech is usually delivered downtown, and in this instance, was held  in a neighborhood. Duggan has been emphasizing the need to improve neighborhoods.

During his speech he talked about the importance of keeping people in the city and  avoiding foreclosures. He announced innovative ideas to deal with abandon properties and put people in new homes, and he announced a zero-percent interest loan program for Detroiters who need to fix up their homes.

The interest free loans for home repairs will range from $5,000 to $25,000 and will be available in March to qualified Detroit homeowners who can afford a loan. The minimum FICO credit score a person can have is 560.

He talked about the decline in crime. He said carjackings last year were down 32 percent.

"We had the fewest murders since the 1960s. The homicide clearance rate was up. The numbers are going in the right direction. But nobody here is celebrating the fact that we had 300 murders in the city of Detroit (last)  year. We have got to change the culture of this community to recognize that every life matters."

He said for the first time since 2002, the city will have a balanced budget for the fiscal year, a statement that drew a round of applause and a standing ovation.

He said the police response time for 911 was 37 minutes.  Today, he said police have cut the response time in half and are nearing the national average.

And he talked about expensive car insurance in the city.

He said Detroit needs help to create its own insurance company, and he vowed to fight to "fix this injustice" and give people a fair rate for their cars.

He talked about economic inclusion, and he discussed affordable housing in Midtown, Corktown and downtown that will come along with more expensive homes.

"We are going to make sure as these neighborhoods grow, everybody is welcome," he said. "Because that's what a city is."