In his impassioned eulogy at the funeral Friday of the Rev. Clementa Pinckney in Charleston, S.C., amid the rapid disappearance of Confederate battle flags across the South, President Barack Obama urged Americans to continue asking hard questions about race.

So here’s a question for Metro Detroit about a racially charged symbol at Michigan and Schaefer in Dearborn: What should be done about the 10-foot statue of longtime Mayor Orville Hubbard?

The bronze statue, that shows Hubbard waving and smiling, is not as freighted as the flag that symbolizes the rebellion to preserve slavery. But it qualifies as a “reminder of systemic oppression and racial subjugation,” in Obama’s words, because Hubbard was one of the most notorious segregationists outside the South during the civil rights era. 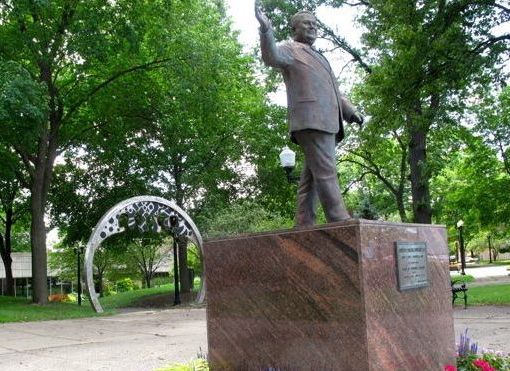 "Hubbard was an effective administrator," says a bronze plaque below his statue in front of Dearborn City Hall.

Orville Hubbard was our George Wallace, our Orval Faubus, our Strom Thurmond. While his memory is fading 33 years after his death, Hubbard’s words and actions contributed much toward creating the difficult racial climate that has existed in metro Detroit for many years. In 1969, The New York Times wrote that “Hubbard’s Dearborn is a symbol of the deep-seated racism of the North.”

Hubbard told The Times: “Goddammit. I don’t hate niggers. Christ, I don’t even dislike them. But if whites don’t want to live with niggers, they sure as hell don’t have to. Dammit, this is a free country. This is America.”

He added: “I favor segregation. Because, if you favor integration, you first have kids going to school together, then the next thing you know, they’re grab-assing around, then they’re getting married and having half-breed kids. Then you wind up with a mongrel race. And from what I know of history, that’s the end of civilization.”

As his coverage in the Times suggests, Hubbard was no two-bit suburban politician. He served as mayor from, remarkably, 1942 to 1978.

Immediately after World War II, Dearborn was Detroit’s biggest and most important suburb, and Hubbard used his prominent bully pulpit as the region’s second best-known mayor to fuel racial antagonisms, preach his gospel of white supremacy and hold the color line at the Dearborn-Detroit border. Dearborn-based Ford Motor Co. at the time was one of the nation’s biggest employers of African Americans, but the Dearborn police made sure black workers knew their best strategy was to spend as little time as possible in the city before and after their shifts.

In 1963, federal authorities charged Hubbard and two police officials with failure to intervene when a mob attacked a white homeowner whom the rioters suspected of renting to African Americans. It turned out the black men neighbors saw around the house were movers. A jury acquitted Hubbard of the charges, but Hubbard opposed low-income housing projects and in 1956 told an Alabama newspaper, “They can’t get in here. Every time we hear of a Negro moving in…we respond quicker than you do to a fire.” 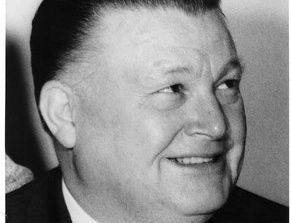 Hubbard, a jowly 300-pounder, became a legend for more than his racism. His 36-year reign is one of the longest for an American mayor, and the unmatched city services he delivered drew national attention to Dearborn. He was also a buffoon, who pulled stunts like awarding the key to the city to Christine Jorgensen, one of the first well-known transgender persons.

The statue of Hubbard stands on municipal property just west of Michigan and Schaefer, two busy streets that connect with nearby Detroit. It’s next to the old city hall, which is being transformed into a space for artists. Numerous African Americans pass the site each day. The Arab American National Museum is across the street.

Should the statue be removed and, perhaps, placed in a museum? As it happens, Dearborn has a historical museum. It could be a nice fit. Will pro-Hubbard people argue he is part of the city's heritage, like flag proponents do in the South?

At the least, someone should rewrite the plaques that are on and near the statue so they provide some context for Hubbard’s career. In the 21st Century, post-Charleston, the current plaques appear to be parodies.

On the base of the statue is a quote from Etienne de Grelet, a French-born American Quaker missionary:  “I shall pass this way but once; any good that I can do or any kindness I can show to any human being; let me do it now. Let me not defer nor neglect it, for I shall not pass this way again.”

While his reputation lingers, Dearborn today is much more diverse than it was during the Hubbard years, with a small but growing black population and the internationally known Mideastern community. The political leadership has long been in the modern American mainstream. The statue is not the only memorial to "Orvie," as he was known; the city also has a street and two senior-citizen apartments named after him.

Presenting Hubbard’s likeness in such a celebratory fashion, without a word about his aggressive race-baiting, is dishonest and embarrassing; it’s a cover-up that obscures the reality of southeast Michigan’s ugly racial history.

In Charleston, Obama said: “For too long, we’ve been blind to the way past injustices continue to shape the present.”

The reckoning in Dearborn is long overdue.

McGraw, a Dearborn resident and co-founder of Deadline Detroit, is now on the staff of Bridge Magazine.

That 'Embarrassing' Hubbard Statue Is on a 'Lies Across America' List, June 29