Detroiters Will Be Hired to Make Shinola Headphones, Turntables and Speakers

Shinola, the five-year-old Detroit startup that has gone global, will reach beyond watches, leather goods and bikes.

Product additions this year and next will include audio gear and fashion eyeglasses, The New York Times reports in a magazine-length company profile on the cover of Thursday's Style section.

In a few years, watches and bikes may be only a slice of the pie. . . . Management is already preparing to unveil Shinola, Part II. 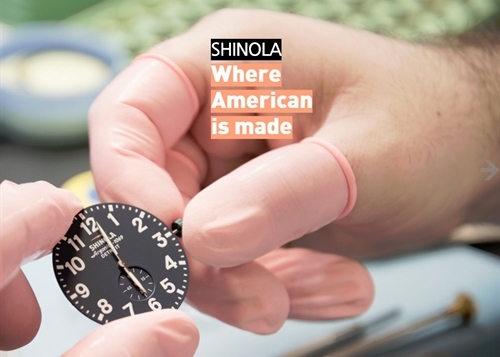 This fall, the company will introduce an audio line of turntables, speakers and, most important, audiophile-quality headphones, rendered in leather and brushed stainless steel, which it intends to sell for $450 to $650. Its founders think those will become one of its biggest revenue drivers.

“We read about Beats by Dre selling to Apple for $3 billion and we thought, ‘Huh,’” [founder Tom] Kartsotis said with a smile.

Initially, the audio equipment will be manufactured in the company’s Midtown headquarters, although Shinola recently purchased an abandoned creamery in the same area where it plans to create a free-standing audio factory.

A market that potentially is even bigger than headphones, Kartsotis said, is eyewear, which the company hopes to move into seriously by 2017. The plan is to open a Shinola eyewear plant on the South Side of Chicago, in Hyde Park. 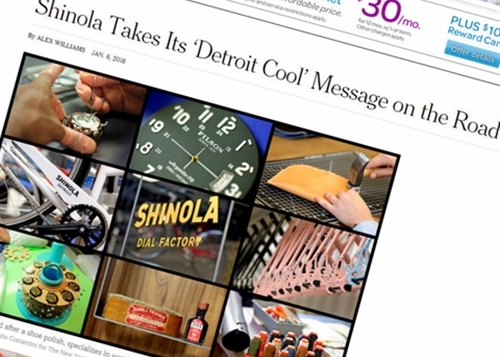 Features writer Alex Williams, who describes the luxury lifestyle brand as "s a symbol of Detroit gentrification," gives readers a sense of our city in his sprawling, 2,900-word opus.

The New York reporter interviews Shinola's jeans-wearing founder over a burger at the Bronx Bar ("an old-school tavern near the Shinola flagship") and over a cocktail at the London Chop House ("an old-school jacket-and-tie-style steakhouse downtown").

Indeed, Shinola scored a hipster hat trick, unveiling a brand that married “Americana,” “locavore” and “small batch” at the height of the artisanal era.

For balance, he quotes University of Michigan associate professor, artist Rebekah Modrak. She wrote last year at Infinity Mile, an online monthly arts journal, that the company “uses the design aesthetic of ‘calculated authenticity’” and said that its "bougie crap promises a legacy of permanence via consumer culture in contrast to the decay of Detroit."