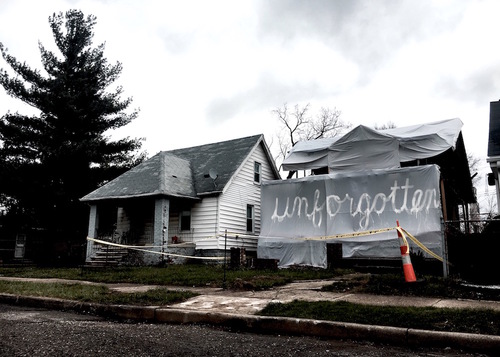 You might recall that Ryan Mendoza, an American-born artist living in Germany, generated international attention when he deconstructed an abandoned Detroit home on Stoepel Street near 8 Mile Road and put it back together as an art exhibit in the Netherlands in February. 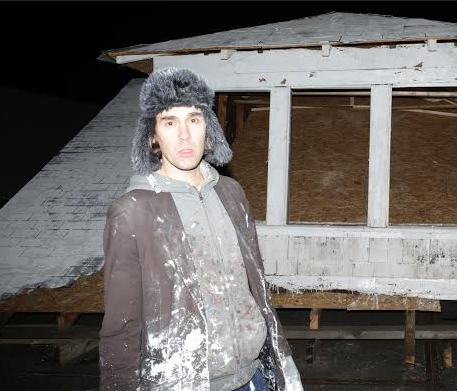 More recently, Mendoza started catching hell for leaving a mess behind. Part of the structure was still up even though he took away the facade of the house.

Neighbors started complaining, the Detroit City Council approved an emergency demolition back in December, and the media in recent days started reporting on the controversy surrounding the mess.

On Monday, the Detroit Building Authority (DBA) had had enough.

"While the city didn't cause this problem, we're moving fast to fix it," said Bryan Farkas, director of special projects for DBA told Deadline Detroit earlier in the day.  "We are going to demolish today and go after the responsible parties for the cost incurred."

By mid-afternoon, a city contractor went over to property and tore down the structure.

Last Friday,  Mendoza told Deadline Detroit that he had paid $13,500 for the demolition to a Detroit man and was assured that it would cover the entire cost of the project. He said the man who was supposed to do it fell ill and then kept promising to finish the demolition. Nothing happened.

By Monday evening, after the city had done the demolition, Mendoza said he finally realized that day that the man, who helped deconstruct the house, was never going to finish the demolition. .

The man, Harley Brown,  who was doing the demolition, told Deadline Detroit  he got sick from deconstructing the house last year and then he ended up waiting for the temperatures to warm up to complete the task. He also said the $13,500 wasn't enough to cover everything considering the demolition was being done by hand.

"I did these people a favor," he said. " And now they’re ungrateful."

This past weekend Mendoza and his wife Fabia Mendoza flew from Germany to Detroit to address the messy property. They also came for the Freep Film Festival, which on Saturday at 2 p.m. is showing Fabia's documentary on the art project, called "Coming Home." 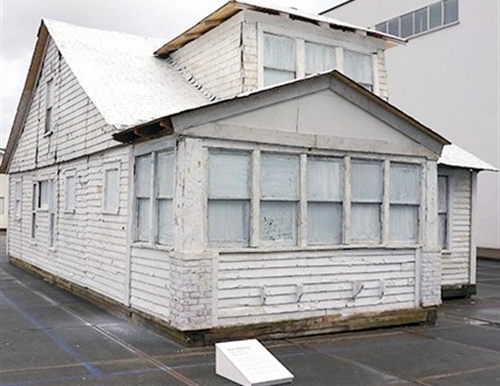 On Sunday night, the couple put a canvas over the house that had the word "Unforgotten." Mendoza  said he wanted to relay a message to the neighbors that he never had any intention of abandoning them and leaving the property in disarray. The word, he said, also represented the project as a whole; That the house and the family that once lived there would never be forgotten, thanks to his project.

When the Mendozas got to the house on the weekend, they said neighbors were angry.

"We apologized to neighbors ," said Fabia.  "I would share their frustration. They’re right to say this that they were frustrated. I really apologize that it's taken so long."

Late Monday afternoon, she expressed relief that the structure was torn down.

"We are all happy," she said, adding that now they'll have to figure out who owes the city for the demolition The house was given to them by a friend named Greg Johnson, who is the legal property owner. The cost for the city demolition is expected to be about $9,500.

The mess left behind had started to generate media interest. Last Friday, Mark Stryker of the Detroit Free Press published a story that said:

Six months after artist Ryan Mendoza's team finished stripping the facade off a two-story house near 8 Mile and Livernois  — and assured neighbors the rest of it would be demolished immediately — the naked shell of the home still stands in the middle of a healthy block. It's a jumble of urban decay, rubble, debris, exposed beams and falling plaster.

The story of 20194 Stoepel has become a tangled web of lofty artistic intentions, unintended consequences and broken promises, leaving  neighbors living next to blight they say is worse than when the house was simply abandoned.

"I feel disrespected to the max, like we are nothing," said Beverly Woung, who lives next door to the crumbling remains.

Ryan Mendoza says he's bothered that the city made such a big deal of targeting the targeting when there are tens of thousands of others in need of demolition.  Plus, he said, his intent is good, and he plans to sell more houses as art and use the proceeds to buy homes in Detroit for single mothers.

He says the art project, "The White House,"  is a success. In fact, he says, it garnered so much attention locally and internationally that the city felt so compelled to aggressively go after the property. "They reacted with such speed," he says.

'I'm Ready to Pay For It Again'

Mendoza is particularly bothered by city plans to sue to recoup the demotion money.

"What need is there for a judge’s order? If the Detroit City Authority wants from me the compensation for the demolition, I am willing to pay it directly.

"They obviously have my personal email address as they have used it in the past. I haven’t lived in the states for the better part of 20 years, but as far as I can recall, the first procedure in trying to extract money from someone is simply to ask for it. I paid for this demolition once, I'm ready to pay for it again."

On Tuesday morning, Mendoza submitted this to Deadline Detroit for publication:

If the people are wondering why the Detroit City Mayor’s office is treating the Stoepel Street become White House case with such urgency and is so eager to go after me personally, going to such unusual lengths as to seek a judge’s injunction in order to collect monies that would ordinarily be sought otherwise, I invite them to read my correspondence with Craig Fahle,  director of public affairs and senior adviser for the Detroit Land Bank Authority and to judge for themselves.

The mayor is aware that I would like to bring charity in the form of renovated houses back to the community of the 7 and 8 Mile area. Perhaps his might make the mayor look bad, as his office had originally not taken the slightest interest in my project, it will also go against what I learned is the Land Bank’s overall agenda: to enrich the downtown area while snuffing out some of the poorer areas, like the one I voiced my intention to improve. Their admitted view, as I was informed in confidence by one of their own employees, is that some of the poorer areas should be likened to old, sick, terminally ill people and it is their view that these areas are just not worth investing in or attempting to save.

Thank you very much for your answer!

I want to underline again, that we have no intention to harm the image of the city of Detroit.

Ryan, his agent L.S., and I visited Detroit several times. We are loving Detroit and are very happy to see the recent, very positive developments in the city, I adore the beautiful photo project Bruce Weber was doing about Detroit.

Also the short film I am working on regarding this project features a lot of young artists from Detroit, moreover I was interviewing Tommy Hearns, who loves our Project...

Thomas Hearns said something very nice the last time we sat down with him: `Ryan, you are about to take something that otherwise will be thrown away and will make something wonderful out of it`

I think it´s emblematic that the city of Detroit is in a state of big positive transformation- And I think that our project could represent this positive change.
The people I was talking to from Detroit (from entrepreneurs to people living in the more problematic suburbs!) were all very excited about what we are doing and felt proud that we are planning to bring a piece of their city over to Europe.

Moreover, the auctioning of the Facades in a  lottery will certainly bring positive press to the Landbank…

The House will be showed at the Verbeke Foundation, Belgium…

I hope to get word back from you ASAP. If you need more material, information please don´t hesitate to ask I am happy to procure whatever is necessary.

All my best,
Fabia Mendoza

Though Harley Brown might not have been the fastest demolition expert in the world and while he might have misled me on certain issues in his promise to take down the building, I stand beside Harley and the owner of the property Gregory L Johnson, as, they truly believed in this project. Without their collaboration, the house on Stoepel Street would never have made it all the way across the Atlantic Ocean to become the White House, an arrow that points, for all the people to see, in the direction of those with massive power who are perhaps really the ones to blame.

I hope the people who took part in my wife’s documentary, an homage to Detroit entitled: ‘Coming Home, the road to hell is paved with good intentions’ are not ashamed of their involvement. I invite them to hold their heads high at the preview at the DIA this Saturday.

I apologize again to the neighbors who had to deal with the house I temporarily left behind. They should never have had to live next to such an eyesore. Many had thought I had abandoned them, or that I had simply forgotten. Nothing could be further from the case. Today we can celebrate without having to forget.

I hope in the future, rather than being castigated or in some cases even jailed for decorating the abandoned buildings, that artists like myself, outsiders proud to rub shoulders with real Detroiters, are given greater consideration into how they can help in the transformation of the city.