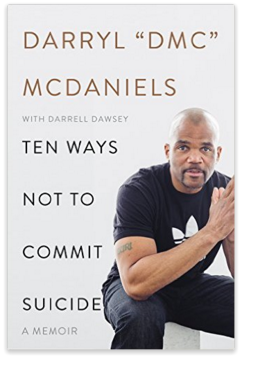 Darrell Dawsey, a former Deadline Detroit columnist and reporter for The Detroit News and Los Angeles Times, has written a book with Darryl "DMC" McDaniel, a co-founder of Run D.M.C.

The title is "Ten Ways Not to Commit Suicide: A Memoir."

"The short of it is that it's a memoir that focuses on DMC's assorted personal struggles, including his alcoholism, depression and trauma over learning very late in his life that he was adopted," Dawsey tells Deadline Detroit. "We strip away the stardom to get at the core of the man. I put the book together by drawing on extensive interviews with DMC that I conducted in various locations over the past two years."

It will be published July 5 by Amistad Books, part of Harper Collins.

Dawsey, communications director for the Michigan American Civil Liberties Union, is the author of "Living To Tell About It: Young Black Men in America Speak Their Piece" and the best-selling "I Ain't Scared of You: Bernie Mac on How Life Is."

In this surprising and moving memoir, the legendary rap star and cofounder of Run D.M.C. keeps it a hundred percent, speaking out about his battle with depression and overcoming suicidal thoughts—one of the most devastating yet little known health issues plaguing the black community today.

As one third of the legendary rap group Run D.M.C., Darryl “DMC” McDaniels—aka Legendary MC, The Devastating Mic Controller, and the King of Rock—had it all: talent, money, fame, prestige. While hitting #1 on the Billboard charts was exhilarating, the group’s success soon became overwhelming. A creative guy who enjoyed being at home alone or with his family, DMC turned to alcohol to numb himself, a retreat that became an addiction. For years, he went through the motions. But in 1997, when intoxication could no longer keep the pain at bay, he plunged into severe depression and became suicidal. He wasn’t alone. During the same period, suicide became the number three leading cause of death among black people—a health crisis that continues to this day.

In this riveting memoir, DMC speaks openly about his emotional and psychological struggles and the impact on his life, and addresses the many reasons that led him—and thousands of others—to consider suicide. Some of the factors include not being true to who you are, feelings of loneliness, isolation, and alienation, and a lack of understanding and support from friends and family when it’s needed most. He also provides essential information on resources for getting help. Revealing how even the most successful people can suffer from depression, DMC offers inspiration for everyone in pain—information and insight that he hopes can help save other lives.