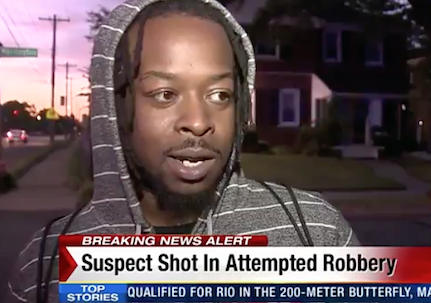 Cordaro Boyd, 29, an off-duty security cop at the Somerset Collection in Troy, was headed to his cousin's house on 7 Mile Road near Warrington well after midnight early Thursday morning.

He had just gotten off the bus when four men ran across the street and asked for gas money, reports Lauren Podell of WDIV.  He said he didn't have money and tried to move on.

“I shrugged my shoulders, kept moving. A guy pulled out a big ol’ gun, and I was still moving away from them, but the one hit me in the back of the head with a baton stick or whatever," Boyd told WDIV. “He had his gun pointed at me and I did what I had to do.”

He pulled out his gun that he's licensed to carry and opened fire, shooting at least one of the suspects, a 21-year-old, who is in custody and being treated at the hospital, WDIV reports. He's listed in temporary serious condition. The other three men took off and there's no indication of any of them were shot.

Podell reports that Detroit Police want to look at video from cameras at the BP gas station across the street.