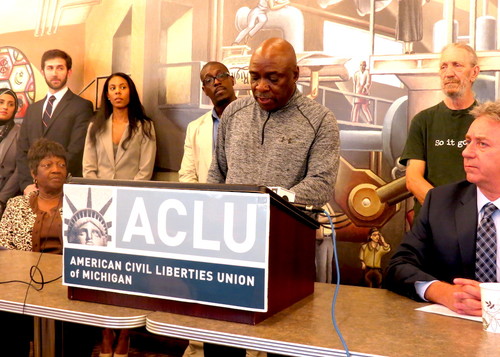 Walter Hicks, a plaintiff in class-action suit, at press conference.

Trying to stop what could potentially become a new wave of homeless people in Detroit, the ACLU of Michigan and the NAACP Legal Defense Fund filed a class action lawsuit Wednesday to stop the city and county from foreclosing on thousands of homes through a practice it describes as racially discriminatory.

The suit claims authorities have issued "unlawful" tax assessments by failing to adjust bills to accurately reflect lower property values. About 5,600 owner-occupied homes are currently at risk of being foreclosed in Wayne County, and there are likely to be many more in the future, the ACLU said. About 90 percent of the homes in question are in Detroit. (Read the lawsuit)

The ACLU also alleges that the city has denied many requests from poor people for a  "poverty tax exemption," which lowers homeowners' tax burdens by half or eliminates them all together.

"African-American homeowners in Wayne County are enduring a tax foreclosure crisis of a magnitude not experienced by homeowners in Michigan since the Great Depression," said the lawsuit filed in Wayne County Circuit Court. "Wayne County and (Treasurer) Eric Sabree...are preparing to seize the homes of thousands of county homeowners -- the overwhelmingly  majority of whom are African- American -- due to their inability to pay property taxes that are magnitudes higher than the taxes that can legally be assessed under Michigan law."

The  lawsuit, which was announced at a Wednesday morning press conference at the local ACLU headquarters on Woodward Avenue in Detroit, was filed on behalf of seven Detroit homeowners and a coalition of neighborhood associations: Historic Russell Woods-Sullivan Area Association, the MorningSide Community Organization, Oakman Boulevard Association and Neighbors Building Brightmoor.  The defendants include Wayne County Treasurer Eric Sabree, Wayne County and the city of Detroit.

The Washington law firm of Covington & Burling was also involved in the filing of the suit.

The suit asks for authorities to stop foreclosures on owner-occupied homes "without regard to whether a property has been over-assessed," and correct problems that resulted from wrongful foreclosure practices of the past.

"Wayne County and Detroit are creating human catastrophe by tossing thousands of homeowners into the streets for inability to pay unlawfully assessed taxes," Michael J. Steinberg, legal director of the ACLU of Michigan, said in a statement before speaking at the press conference.

"The Wayne County Treasurer's Office has worked this year in conjunction with numerous cities including the City of Detroit and numerous community groups and nonprofits to reduce property tax foreclosures by 46% from last year. We are preparing for the state mandated property tax foreclosure auctions which will take place in September and October of 2016. Our office does not comment on pending litigation."

The City of Detroit, in partnership with the Wayne County Treasurer's Office and others, has been taking unprecedented steps to help prevent foreclosures and keep families in their homes. This has been one of the Mayor's highest priorities. We successfully sought legislation to reduce penalties and interest and create workable payment plans that have helped to keep more than 27,000 homeowners in their homes in just the past year. We've had people literally knocking on doors to provide information and assistance and have sent information out to 200,000 homeowners letting them know what resources are available help them. The Assessments in 2013 were supported by sales data and consistent with home values across the city.

One of the plaintiffs in the lawsuit, Walter Hicks (pictured above), spoke at the press conference and said his property assessment does not reflect the lower value of his home.

Additionally, he said he was denied a poverty exemption because the city of Detroit said he owned a second property. He said he showed that the second property belonged to someone with the same name, but a different middle name. He said the city still rejected his request.

He said he was placed on a payment plan to pay his taxes, but he said he can't afford to pay.

He said he just wants to be treated fairly.

"The City is proud to have played a leading role in new 2014 state legislation allowing installment agreements for those in foreclosure. The result being that 27,539 Detroiters who were in foreclosure a year ago were able to stay in their homes. The City looks forward to vigorously defending this meritless case in court."