Our Oct. 24 roundup on this high-impact issue is reposted as a last-weekend voter guide.

It's the Regional Transportation Authority millage -- a choice for voters in Wayne, Oakland, Macomb and Washtenaw counties.

If you haven't made up your mind, here's an at-a-glance look at what's involved, why backers favor approval and why critics object. And if you see public transit as too complex or unimportant because you drive, think again and see why this matters a lot. (Two videos are at the end.)

This is “arguably the most important transportation measure to go before voters” anywhere in the country Nov. 8, says national transit advocate Robert Puentes of the nonprofit Eno Center for Transportation in Washington, D.C.

The ask and the cost

► Proposal: The Regional Transit Authority (RTA) of Southeast Michigan hopes to raise $2.9 billion with a 1.2-mill property tax lasting 20 years in the tricounty Detroit area and Washtneaw. Passage would let the authority get $1.7 billion in state and federal funds. 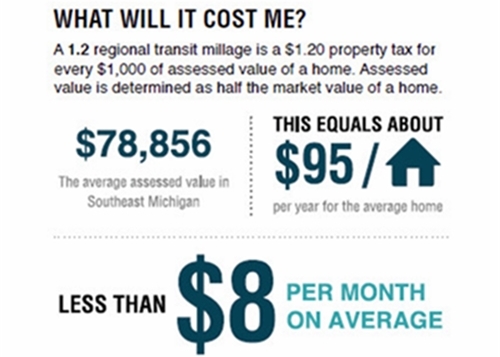 ► Tax overlap: The cost would be in addition to current transportation levies for property owners in in Ann Arbor and Detroit suburbs served by SMART buses and vans. 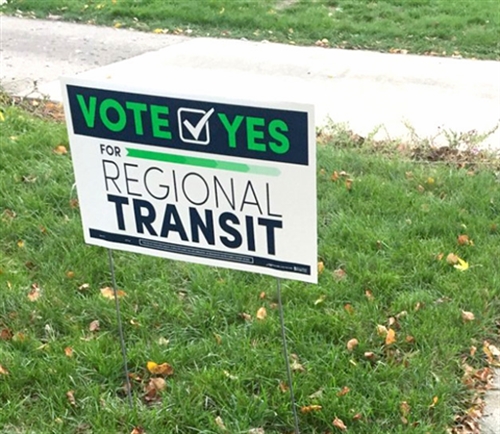 ► 'We can do better:'  "Getting to jobs is near-impossible for many Detroiters, as well as the growing number of poorer residents in Macomb and Oakland counties. Our failure to create coherent mass transit . . . amounts to us failing those residents.
"Lousy public transit is one of the drivers of sustained, intergenerational poverty, because the literal mobility that leads to economic mobility is frayed and tattered in our region. . . . We can do better. And we should." -- Detroit Free Press editorial

► 'Let's keep moving:' "The Detroit region needs to step it up, regarding transit, to compete nationally and globally. . . . Currently, fed dollars being collected from the taxpayers of the Detroit region but are going to other cities (Denver, Dallas, Portland, etc.) because we don't have the appropriate mechanism to bring to money back to Detroit!
"After many years of decline, Detroit and the metro area are working together, collaborating and seeing successes at many levels. It's an exciting time to be in metro Detroit! Let's keep moving the region forward and get a transit system in place that will drive it to higher levels! Please vote yes on the RTA." --  Mark Nickita, Detroit architect (president of Archive Design Studio), on Facebook

► 'Ask a millennial:' "I don't understand why local political leaders aren't out there beating the drum for this millage because it's an economic development tool. They trot the globe trolling for new jobs for the region, but they won't invest in something that will help local employers already here find the workers who need jobs. And if Denver is any model, the system could actually attract new talent to the region. . . .
"For years, we've asked honorees in our 20 in their 20s program what they would most like to see in the region. Their No. 1 suggestion: transit. If you're undecided about the vote, ask a millennial — or your adult child who no longer lives in the region — for an opinion. It may be enlightening." -- Mary Kramer, Crain’s Detroit Business publisher

► 'A economic boon:' "Reliable transit is essential to get to work. Unfortunately, few of our [nearly 16,000] employees can regularly rely on regional public transit to do that. And for patients, an inability to get medications, get to their physician’s office, or get to screening and diagnostic tests leads to unnecessary hospitalizations, exacerbation of illnesses and delays in critical treatments. . . . Connected regional transit would be an economic boon for Southeast Michigan and all who live, work, do business and play here." -- Jean Meyer, president/CEO of St. John Providence health system, in Bridge magazine guest column

► 'Walking Man' cites his experience: "They should have this millage pass so people won’t have to go through what I did. -- James Robertson, formerly carless Detroit commuter in Free Press interview

► 'Regionalism!' "The RTA needs the resources to realize its full potential: Regionalism! Four contiguous counties that have a chance to realize diverse, dynamic development or silo themselves at their peril." -- Ben Falik, Detroit Jewish News columnist

► 'A historic opportunity:' "This measure provides a historic opportunity to move the region forward in so many ways. . . . The wheels of progress will turn only as fast as the wheels of transportation. Advancing reliable regional transit will help employers hire more workers and give workers the ability to get to good-paying jobs and opportunities, ensur[ing] southeast Michigan can compete for the talent and jobs of the 21st Century." -- William Milliken, former governor quoted in Free Press 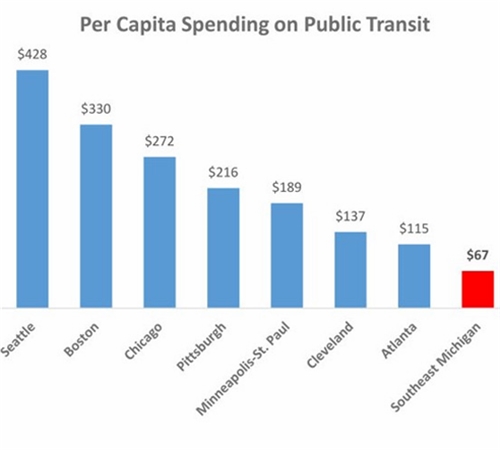 Comparisons of spending in cities and metropolitan regions. (RTA graphic)

► Don't 'waste this opportunity:' "High-quality transit is a proven economic-growth engine. . . . We cannot waste this opportunity to reliably connect our communities. . . .
"Accessibility is essential for high-quality health care. Unfortunately, Michigan's current disjointed network of separate transit providers leaves far too many communities not served or far underserved. A lack of reliable regional transit especially affects the most vulnerable or underserved citizens in Southeast Michigan. This includes seniors and people with disabilities, who may not be able to drive. Being unable to drive should not hinder a person's independence. . . .
"It is not just people who can't drive who are negatively affected by disconnected regional public transit. A majority of employees are unable to rely on public transit to get to work; 92 percent of jobs in Southeast Michigan cannot be reached within 60 minutes on regional public transit. This negatively affects employers, like DMC, and employees alike." -- Joe Mullany, Detroit Medical Center CEO, in Crain's Detroit Business guest column

► 'A common interest:' "Passage would break down some symbolic barriers, and some practical ones as well. . . . Approval would signify popular recognition that Detroit and its surrounding counties share a common interest. And it would make it a whole lot easier to get around without a car." -- Henry Grabar, financial journalist at Slate

► 'Send a strong signal:' [Metro Detroit's] vote in November will send a strong signal about how ready it is to think and act like a region, rather than squabbling neighbors. At stake is its collective success. -- Robert Puentes, president/CEO of the Eno Center for Transportation, writing in U.S. News & World Report

► Stars in alignment: There are 'aligning stars,' from the city’s recovery to shifting generational attitudes, which give reason to believe that this transit plan has a real shot at becoming a reality. We’re finally beginning to see what’s possible with a forward-thinking regional vision." -- Anna Clark, writing at Next City

► 'Our last . best chance:' "We’re one of the few metropolitan regions in the country without a comprehensive mass transit system. The arguments for having one are so compelling they hardly bear repeating. . . . After 50 years of fruitless efforts to achieve a mass transit system for Southeast Michigan, the time has come to recognize that the perfect is too often the enemy of the good. The RTA proposal as it stands represents what may well be our last, best chance to create the foundation for a comprehensive and evolving metropolitan-wide transit system. For area voters to turn it down would inflict terrible damage to the future of a thriving economic region in southeastern Michigan. -- Phil Power, Center for Michigan founder/chairman, in Bridge Magazine column 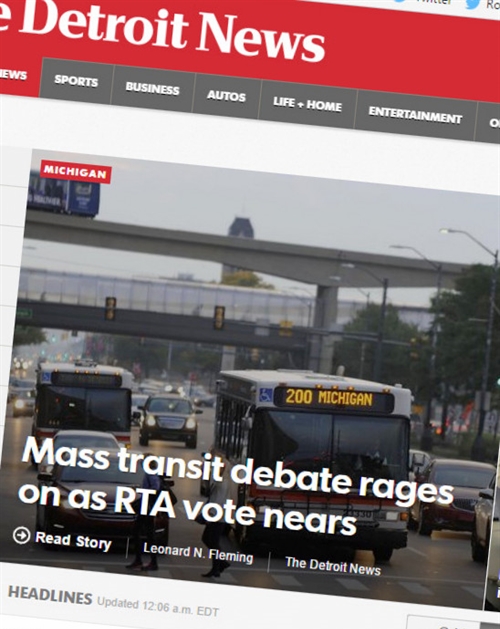 ► 'Smaller bites:' The millage "probably would have a bigger chance of success if they offered it in smaller bites. If three or four proposals were offered over time, it would be easier to get support from those people and areas affected rather than for a huge proposal.
"Southeast Michigan needs a modern mass transit system. But project planners must be cautious and, above all, realistic. To put all the eggs in one basket would be a huge risk, and one that we should not be forced to take." -- Keith Crain, chairman of Crain Communications, in Crain's Detroit Business column

► Bus Rapid Transit won't be popular: "The RTA seems to be asking voters to approve paying for a system they don’t and won’t use. . . .Instead of having fast, efficient, rail-based systems that can move thousands more people per hour, we’re stuck with so-called 'Bus Rapid Transit.' . . . You cannot convince the people who would choose to ride smoothly accelerating light rail vehicles that the slow, jerky acceleration of crowded, fuel-burning buses is the same experience. . . .
"They ask us all to vote for a system of buses so that poor folks can take the bus from Detroit out to Hall Road to work for the people who drive." -- Michael Jackman, Metro Times managing editor

► 'Less convenient and more expensive:' "Yes, Detroit needs more transportation options. But with a transportation revolution brewing, the region should look forward to its future, not backward. The next generation of transit will involve a whole lot of Ubers, Lyfts, commuter and health care carpools of all kinds — and self-driving vehicles. Terrible public transportation is a decades-old problem here due largely to the fact the region birthed the auto industry, pushing it to invest in car dependency and suburban sprawl while other cities were building rail lines and subways.
"Now we’re grasping at buses as the solution. . . . But buses are less convenient and more expensive than ride-sharing, which gets you directly from point A to point B without having to walk to and from a bus stop or train station. That’s critical for the elderly and disabled to get around, and would save time for low-income public transit commuters. But those options aren’t even part of the RTA plan.
"Government-subsidized Uber rideshare programs can begin for the city’s residents today. The infrastructure is already there. The RTA plan calls for a five-year build-out. . . . So why is Metro Detroit now considering a massive tax hike for the next 20 years to fund what will be a dated, comparatively inefficient regional public transit system by the time it’s built? -- Kaitlin Buss, Detroit News editorial writer 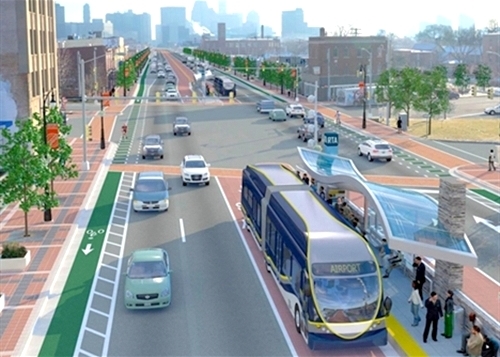 Bus Rapid Transit concept on Michigan Avenue at 14th Street, looking east toward downtown. The CPA Building is at left and Roosevelt Park is on the right. (RTA illustration)

► 'Hazy logic:' "We are not willing to buy into the hazy logic that 'if we build it, they will come.' We are not willing to accept the analogy that funding this mass transit effort is akin to funding local schools which contribute to the overall value of the community whether you use them or not." -- Downtown Birmingham/Bloomfield and Downtown Rochester editorial by publisher David Hohendorf

► 'Another layer of bureaucracy:' Voters "should question whether the benefits justify adding to the tax burdens of all homeowners and business owners, especially those whose burdens are already more than they can bear. Regional transit supporters point out that other metro areas spend more on transit than we do, but none of those other regions have the same challenges as Southeastern Michigan in general and the city of Detroit specifically.
"Improving the coordination of our region’s transit systems . . . doesn’t need to add to the property tax-driven blight in Detroit and doesn’t need to create another layer of bureaucracy over the existing regional transit systems. Let’s be SMART — pun intended — about transit funding and whether imposing more burdens is the best way to create jobs and opportunity in our communities." -- John C. Mozena, Mackinac Center for Public Policy vice president, in blog post

► Let riders 'shoulder the cost:' "Why aren’t riders being asked to shoulder the program’s cost? The majority of property owners (the ones being asked to pay the millage) also own their own transportation. Much like vehicle licensing and fuel taxes pay for the roads, it just stands to reason that those using the system should also be responsible for its funding. . . .
"We already have ride-sharing services such as Uber, Via, Lyft, Bridj. . .  We also have private entities like the Detroit Bus Company and numerous local cab companies. Why should southeast Michigan taxpayers pay for something that is already available?" -- Kevin Grand, Macomb resident in Bridge magazine guest column