Election coverage is hard and second-guessing is easy.

That truism plays out Wednesday as the Detroit Free Press is embarrassed by its premature projection of a Hillary Clinton victiory in Michigan, posted on its site and social media  at 9:15 p.m.Tuesday -- a time when all TV networks had the state as a too close to call.

The newspaper credited "our polling guru, Tim Kiska, who managed an 80-precinct reporting strategy that allowed us to collect enough data to project a winner." 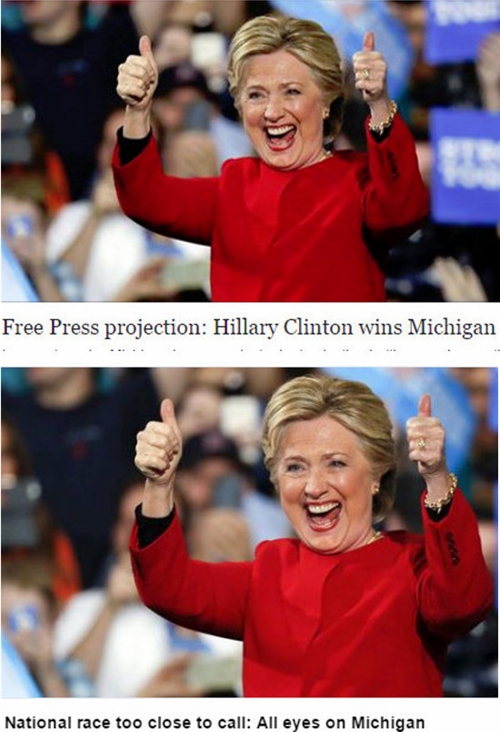 Hours later, the Freep stepped back with the headline: “National race too close to call: All eyes on Michigan.”

Donald Trump ended up carrying the state by 13,225 votes.

Competitiveness, deadlines and over-reliance on exit polls can be a risky mix, the paper now acknowledges:

The Free Press relied on a trusted election analyst, as it has for many years, to collect results from key precincts to help determine the outcome of the race. But what that method didn’t predict well enough was the rural vote, a main reason why Trump won nationwide.

"Clearly, we went too soon," said Robert Huschka, the Free Press' executive editor. "We expect better of ourselves. We missed the mark here. I want to apologize to our readers and to the Trump campaign for the early call."

The daily's boldness left it standing alone. In The Washington Post, an article on the slip begins:

I'm told that someone has called Michigan for Clinton. That's preposterous. She's in serious trouble there as well.

With world watching, @freep still way out on limb pic.twitter.com/Kg3dmZLqNj

These are among tweets on the Free Press's timeline Wednesday:

The paper's after-action assessment says Kiska, a University of Michigan-Dearborn associate professor hired as a consultant, "has been making election night calls for the Free Press since 1974 and has a near-perfect record for the newsroom." It quotes him:

"I'm sitting here and looking at 60 to 65 precincts that were telling me that it appeared based on past performance that those precincts would have given the state to Hillary by 3 to 5 points.

"Well, that just didn’t turn out to be the case. I underestimated some of the Trump vote out-state, in rural areas across the state.”

In its no-byline article, the Freep adds:

His projection was reinforced by national and state polls that showed Clinton would win Michigan by 3 to 5 points, he said. . . .

Kiska used early returns from Oakland County, a wealthy, more conservative metro Detroit county, as a bellwether for how Trump would perform across the state. But as it turned out, Oakland voters did not come out as strongly for Trump as they did in other Republican areas, he said.

Instead of throwing Tim Kiska under the bus, it wldve been easier for Freep to say "we were too anxious to be 1st": https://t.co/MYXakrHNXO

In an additional, unrelated indignity, the Free Press on Wednesday publishes an article listing "5 reasons why America will be OK," reposted from USA Today (owned by the same publishing parent). In addition to two sensible items -- national parks and freedom -- the list suggests delicious foods, sports and Paul Rudd as reasons for cheer "if you’re feeling hopeless about America’s future."

Hey, we're as ready as anyone for whimsical uplift. But Paul Rudd, even as ironic humor?