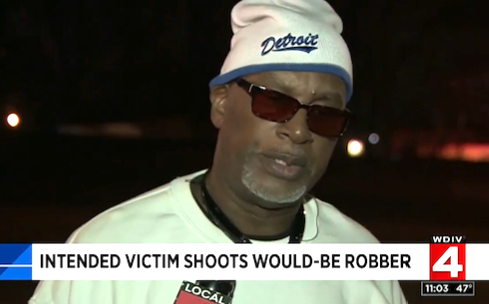 "Dennis" shot the man during an attempted robbery

A 19-year-old armed man was shot and wounded Saturday evening by a customer during an attempted robbery at the E & S Carry Out Shrimp Shack on McNichols and Schaefer in northwest Detroit, WDIV reports.

The incident happened around 5:45 p.m. when the robber produced a gun and demanded cash from the customers.

One customer, only identified as Dennis, said the robber pointed a gun at his girlfriend, Latanya. "I would have given him money if he asked for money," Dennis tells WDIV's Jermont Terry.

The couple and another customer started throwing their money and wallets on the floor.

"When I saw he had the gun in her face, and I threw my wallet down and keys, he turned to look and get the money, that's when I lit him up," Dennis, who is licensed to carry a gun, tells the station. The robber was shot in the stomach and was listed Saturday night in critical condition.

Dennis said he kicked the robber's gun away and tended to him.

"I feel for him. I'm hurting that I had to do that, but he left me no choice," Dennis said.