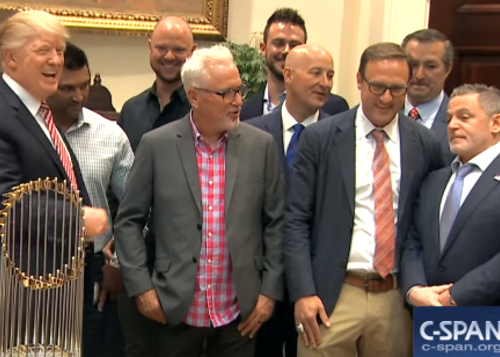 Live on CNN, Trump is seen asking for the Cleveland Cavaliers owner to join the group photo while posing with the Cubs team and the World Series trophy.

After much cajoling to join the photo (“I’m shy. . . . This is awkward because I’m from Cleveland”) and ribbing (“I guess you can’t say great season, right?”), Gilbert enters the picture, standing with Trump and team members. Trump asks Gilbert how things are going with Lebron (with whom Gilbert has clashed in the past). It all starts at the 1:20 mark on the video below.

Of course Twitter exploded at the seemingly random inclusion of Gilbert in the ceremony, as Cleveland.com comprehensively documents.

"Today we met with President Trump to update him and his team on the positive transformations that are taking place in Detroit and Cleveland. We also informed the President of some of the existing challenges that remain, as well as opportunities to solve them through public/private cooperation and/or partnerships.

"We look forward to continuing the valuable dialogue to develop the best strategies to accelerate the progress in our midwest urban cores."

Cleveland.com’s reporting adds: “A source close to Gilbert said his visit to the White House while the Cubs were there was purely coincidental.”

I would've strongly preferred celebrating an @indians victory at the @WhiteHouse today.Being drawn into @cubs visit was quite interesting...

Quicken Loans donated $750,000 for Trump's inauguration in January, according to a public filing by Trump's inauguration committee. However, Gilbert made no personal campaign contribution to Trump. He did back Ohio Gov. John Kasich and New Jersey Gov. Chris Christie on the Republican ticket, however, and also donated $75,000 to a fundraiser to benefit Clinton and other Democratic candidates.

The second-place Cubs were not at the White House on an official visit, but instead visited while in town to play the first-place Washington Nationals. The team's official World Series champions White House visit took place in January with then-President Barack Obama.