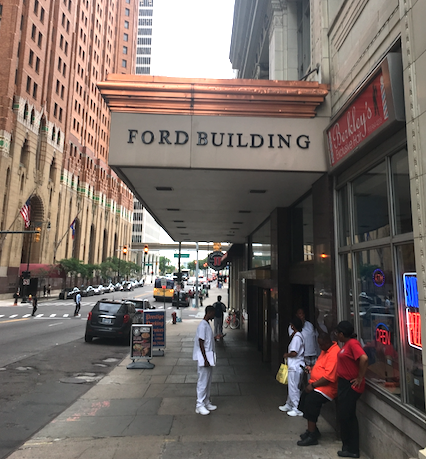 The 18-story Ford Building at 615 Griswold St., one of the oldest office buildings in downtown Detroit, was sold by a local family to the Sterling Group of Detroit for $12 million in early February.

Now, less than six months later, the Sterling Group has turned around and sold the building for an undisclosed sum to two principals, Matthew Shiffman and Zaid Elia, who purchased it under the business name, Ford Building Rino LLC of Southfield.

The sale was recorded Monday at the Wayne County Register of Deeds.

Jacob Sworski, managing partner of Iconic Real Estate, said his firm, which is moving into the building, will assist with leasing.

Last year, Elia and Shiffman purchased the former Fountain Bistro restaurant in Campus Martius downtown and later re-opened it as the Parc restaurant.

The  landmark Ford Building has long been the home for some of the biggest names in the Detroit legal profession.

The Sterling Group is a real estate, investment and management company owned by Gary Torgow, a well-known Democratic Party donor. The company did not immediately return a phone call Thursday for comment. A message was also left with the Friedman real estate firm.

The Sterling Group bought the building from a father-son team of attorneys, Thomas Paglia Sr. and Thomas Paglia Jr.  They had seventh-floor offices and were directly involved in managing the property, which the family bought in 1991.

Deadline Detroit is a tenant in the building, which is next to the Penobscot Building, a 1928 tower.