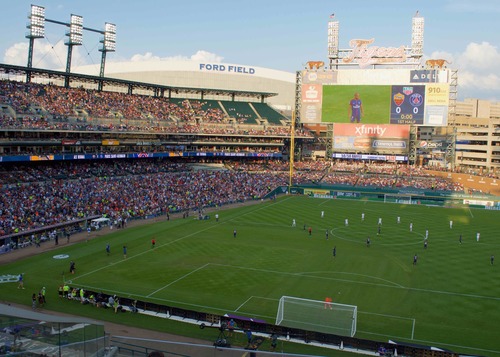 Comerica Park drew a near capacity crowd for a pro soccer game.

Not really. Or at least not now. But that seemed to be the overwhelming conclusion among many folks around town after last week's 1-1 draw at Comerica Park between European soccer powerhouses Paris Saint-Germain and AS Roma (PSG later won on penalties).

It was the first time Comerica had ever hosted a soccer game, and like similar events in other cities across the country, the International Champions Cup (ICC) match was widely seen as a litmus test for whether Detroit has the fan base to support a Major League Soccer (MLS) expansion team. Detroit billionaires Dan Gilbert, the founder of Quicken Loans, and Tom Gores, the owner of the Pistons, have submitted a proposal to Wayne County to build a $1 billion soccer stadium on the site of the unfinished Wayne County Jail on Gratiot in downtown Detroit.

The proposal is currently awaiting a decision from the county. Meanwhile, they've  snapped up several website domains and name copyrights that are combinations of Detroit and football/soccer club, all in preparation to bring the MLS to Detroit. 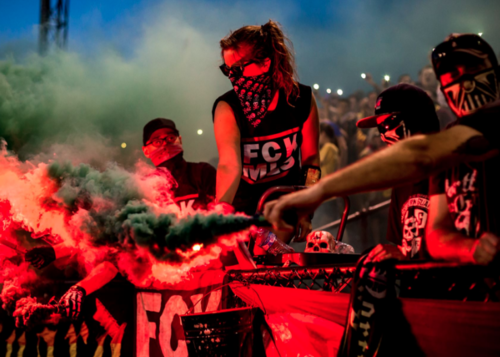 Nearly everyone in the Detroit soccer world unabashedly wants an MLS franchise to come, to the point that many journalists and officials are making arguments it will happen, even without concrete indicators such as a confirmed stadium deal or a firm commitment from the league. The only obvious faction that isn't buying into the narrative is the Northern Guard, the supporters group of the popular minor league club, Detroit City FC, which plays its home games at Hamtramck's Keyworth Stadium.

It opposes the idea aggressively and very publicly The Northern Guard has a clear vested interest. A new MLS team could fatally sap the fan base of DCFC.

On the other hand, Detroit City FC supporters say the team doesn't rule out one day going pro itself. For now, there's no sign that's on the horizon.

To the international media, this local single-mindedness must have seemed strange. The corps of confident, tan, long-haired male reporters who had followed the teams across the Atlantic peppered both head coaches in the post-match press conference with questions in French, Italian and Spanish. They wanted to know which players performed well, how the team chemistry was developing and other traditional preseason queries.

But the (much paler) local media really only wanted to know one thing: What did the game mean for soccer in the Motor City?

They got the answer they wanted, albeit grudgingly.

"It was a very nice atmosphere, it was exciting," said Roma coach Eusebio Di Francesco through a translator. "I enjoyed it very much. The public was great.”

He looked like he couldn’t care less, and PSG coach Unai Emery answered in roughly the same manner.

That might be the reason why, when reporters had the opportunity to interview players and other officials, a larger crowd gathered around Charlie Stillitano, co-founder and chairman of Relevant Sports, the entity that organizes the ICC, rather than around some actual players. And he gave them what they wanted.

This wasn’t in the face of tough questioning—one reporter openly admitted he had longed for an MLS team in Detroit for most of his life. Stillitano couldn’t have given them better quotes.

“Michigan is a great, great soccer state, and Detroit is a great soccer city, it really is. There’s obviously been a renaissance in Detroit, and soccer’s been right with that,” Stillitano said. “I think this market would be great for an MLS team. I think they’ve shown that.”

Other officials are just as enthusiastic. Thomas Faro is the director of the Michigan State Youth Soccer Association (MSYSA). He says these ICC games are a symbol of passion for the sport across the state.

“Perhaps it says something about our fan participation and following that soccer organizers continue to bring such high level matches to Michigan in the absence of a soccer-specific stadium,” he said in an email.

Fans are feeling it, too. Kevin and Jonathan Martin, a father and son from Northville, were excited to see the two European giants play on Wednesday. Jonathan grew up playing and watching soccer, and he regularly watches the MLS, but said it’s hard without a clear team to follow. Kevin came into the game through coaching his son, after having nothing to do with the sport for most of his life.

“I grew up watching Willie Horton," he said, a reference to the Tigers' slugger in the 1960s and 70s.  Now, both say they would love it if Gilbert and Gores could bring an MLS team to the city so they could follow the team closely.

In the aftermath of the Wednesday game,  local media took up the cause. The Detroit News, the Detroit Free Press, MLive Detroit and Crain’s Business Detroit all published stories about or relating to the MLS coming to Detroit.

"With Detroit flirting with the idea of bringing a Major League Soccer team to the city, the match at Comerica Park showed that it would not be impossible to fill a large stadium with Detroit soccer fans," MLive writes.

On Thursday, both major newspapers published longer features on the situation.

"Fans provide glimpse of pro soccer potential in Detroit," was The Detroit News headline, while the Free Press went with "Comerica Park turnout could be sign of future MLS success in Detroit." The News provided a bulleted list of "more tangible evidence" why MLS would thrive in Detroit for the “soccer haters.”

The News also offers counter-arguments to an MLS future in Detroit. It pointed out these “trial run” matches don’t give a perfect indication of a motivated fan base. In addition to the Comerica Park match, Michigan Stadium in Ann Arbor hosted two ICC matches in 2014 and 2016, and the U.S. Women’s National Team played a victory tour match at Ford Field in 2015.

All four saw phenomenal turnout. But they only happen once a year, and on every occasion, at least one team has featured massive international stars. An MLS team wouldn’t be like that. While some clubs, such as New York City FC with David Villa and Orlando City FC with Kaká, have major star power that consistently bring crowds, most don’t. Would 20,000 Metro Detroiters show up once a week for an entire summer to see a team of talented, but not world-class, professionals?

The Northern Guard says no. The members believe a newly created MLS club would lack the passion to be successful, passion Detroit City FC has in abundance, but its prestige would more or less force DCFC out of town.

In a moment of clever timing, the Northern Guard Twitter account published an open letter to Gilbert and Gores on the Wednesday afternoon, just hours before last week's kickoff at Comerica.

The letter, written in Comic Sans and and using phrases almost verbatim in mocking reference to Gilbert’s infamous letter to Lebron James in 2010, doesn’t hold back. It accuses the two “carpetbaggers” of “riding on the coattails of the hard work Detroit City FC and its supporters have put in to create this amazing community with the goal of replacing it.”

“Those hoping to usurp DCFC with a plastic, passionless MLS club will take nothing from this fight but the bitter taste of our resistance,” the letter says.

The next day, the group tweeted, “The question everyone should ask themselves: Would you rather have the future of soccer in Detroit look like Tuesday night or last night?” with side-by-side photos of their game on July 18 next to an image of Comerica on July 19.

They have a point. While Comerica drew an impressive 36,289 people on that Wednesday night, it was a passive crowd, a far cry from the famously rowdy atmosphere at Detroit City games.

Regardless of whether the MLS should come to Detroit or not, there’s the question of whether it even can. The decision-makers seem to be stuck in an endless waltz, each waiting for the other to make a move. Whitney Eichenger, vice president of communications for Bedrock Detroit, the real estate arm of Dan Gilbert’s Rock Ventures, said that a soccer-specific stadium “is contingent upon an MLS team.” But part of the MLS selection process is whether an expansion club would have a suitable place to play. 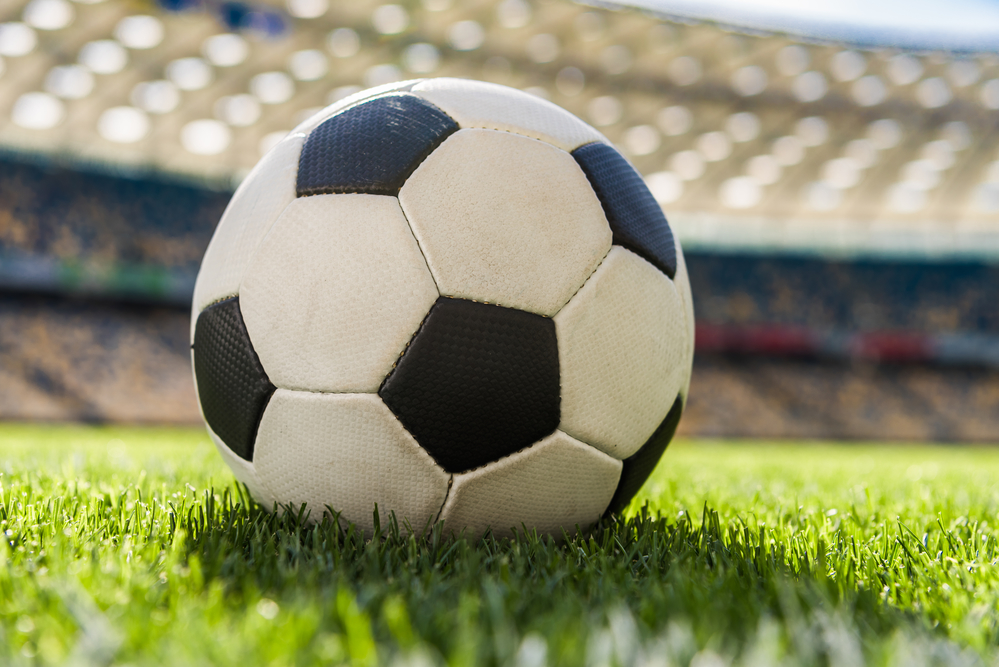 On July 14, Crain’s Business Detroit reported that the MLS would use turnout at Comerica to help gauge viability for an expansion club, but as the Martins demonstrated, many fans are waiting for hometown team to help them really engage further with the sport.

As with many issues, what’s really going on probably lies somewhere in between the two sides.

Although a viable path exists, Detroit is at best years away from a professional club, and a lot could go wrong between now and then.

Some factors are out of the city’s control. Even if Gilbert and Gores built a shiny new stadium and Detroit continued to show its potential for a fan base, and the DCFC community was pacified, the MLS is looking nationally. Currently, Detroit isn’t even near the top on a long list of potential expansion cities, which all have their own version of this local drama. For example, on July 8, Nashville successfully hosted a U.S. Men’s National Team Gold Cup match, which produced a similar buzz.

But Detroit isn’t competing in the same time frame as Nashville or other cities like Raleigh, San Diego or Phoenix. The league expands in rounds, roughly two new teams every two years. Gilbert and Gores have said their goal would be a finished stadium by 2020.

Clubs need time to form, so that means they’re aiming to enter the MLS in a later round than the most immediate one, when teams would start play in 2020. But only five spots remain. The league has said it wants to end at 28 (MLS currently has 22, with Los Angeles FC already confirmed to enter in 2018).

According to Faro, the MSYSA director, 90,000 children play soccer in Michigan. He says it shouldn’t surprise anyone that Michiganders are extremely passionate about soccer. The state is generally regarded as one of the strongest soccer states in the country. Comerica Park drawing over 36,000 to watch two teams that aren’t household names in the U.S. is something. The interest is there, and the support has been growing.

Plus, it’s likely the Northern Guard’s fears are a bit, well, extreme. There’s no rule that says a Detroit soccer fan can’t go to a DCFC game one day and an MLS game the next. Detroit City plays in the National Premier Soccer League, made up mostly of current college players who are not paid.

The ICC, at least, appears ready to get more involved in Southeast Michigan. The billionaire owner of Relevant Sports, Stephen Ross, is a graduate of the University of Michigan and the most generous donor in school history. In an email, Ben Spencer, director of communications at Relevant Sports, said the ICC is “always interested in hosting matches in that particular area of the country.”

“I don’t think there’s any reason that ICC would not return—counting (this) match we’ve been extremely satisfied with the reaction of the fans, and it’s likely we will return to Michigan,” Spencer said.

In the end, simply put, the mythical Detroit MLS club has plenty of hurdles to overcome before it’s a reality.