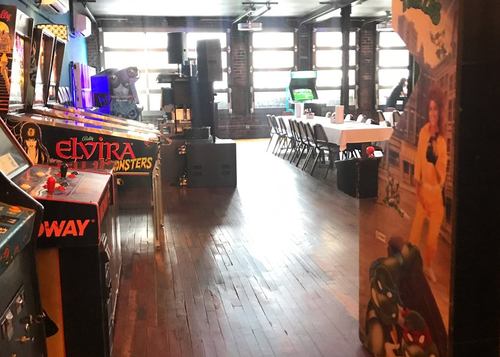 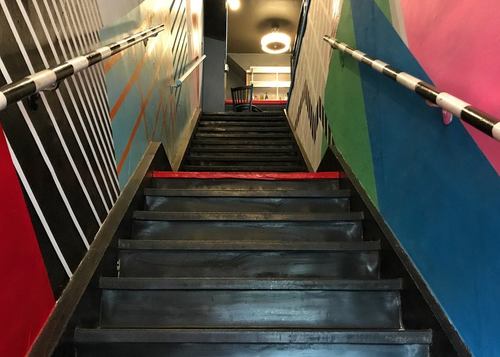 The space was being used for pop-up dinners. The new place will sell New York-style pizza whole or by the slice.

The space is being taken over by Offworld Arcade, which had been roaming around town, moving its vintage pinball and video machines from place to place over the past few years.

The owners of Checker arranged the buildout of the space which is now outfitted with retractable, garage door-style windows. The walls have been left somewhat raw in spots and paired with collages from fashion magazines, green and blue paint, and an ‘80s-inspired mural by local artist Michelle Tanguay. Kitschy touches like red leather bumpers and a silver corrugated panels also give the Pop + Offworld a nostalgic feel.

The owners of Grand Trunk Pub, Whisky Parlor, Checker Bar, and POP have partnered with Offworld Arcade to create another authentic Detroit experience called POP + OFFWORLD, located in the newly renovated space upstairs from the Checker Bar. POP + OFFWORLD will feature New York style pizza with creative pies such as The Pig Destroyer, Caper Crusader and Napalm Breath. Our pizza is meant to raise your pulse and give you a heartburn - just like a video game. The pizza you would make if you were 17 and stoned. A full bar, live entertainment and an immersive arcade experience seven days a week will round out the experience.

Offworld Arcade has been sharing its collection of arcade classics with the city of Detroit since 2014. This project marks the first official “landing site” for the nomadic crowd pleaser and will offer a curated selection of over 30 original, dedicated arcade games that span the entire history of gaming from the 70’s onward.