"It's important to Bedrock that all of our community outreach efforts are inclusive of everyone in Detroit," the company says in a statement to Deadline Detroit. (It was emailed Friday night, but not received until a Saturday morning resend.)

"The branded content article Bedrock placed in The Detroit News is just one piece of a lengthy, multi-faceted ‘Winter in Detroit’ campaign with many photo and video assets that will appear across a wide variety of different mediums," adds the response, posted in full below our original article. No executive's name accompanies the five-paragraph reply.

Bedrock Detroit, which contributes significantly to downtown's rebound and quality of life, undercuts its doing-good image with a seemingly careless or hasty choice of photos illustrating a "Winter in Detroit" promotion 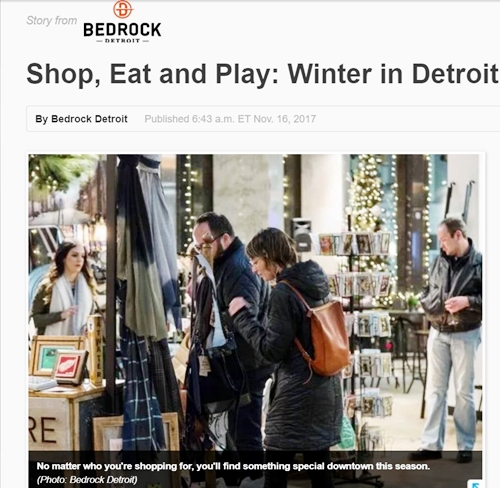 Its 520-word presentation, posted Thursday at The Detroit News and Free Press and labeled as content written and sponsored by Bedrock, has three photos from the company:

Each shopper in the main photo is white, as are nearly all whose faces are visible at the eyeglass shop. A Bedrock spokeswoman says at least four people of color appear to be among the roughly 13 people who can be glimpsed in Warby Parker.

"There is something for everyone this winter in Detroit," says the text accompanying two photos that don't reflect an "everyone" theme.

'Why Make it Racial?'

The reason is that marketing and communication team members who picked and reviewed this week's illustrations missed an opportunity to show downtown as Bedrock chairman Dan Gilbert says it should be shown: "a city that is open, diverse, inclusive." 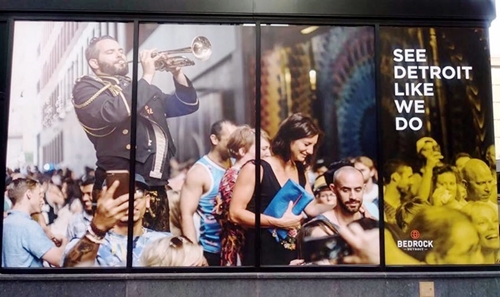 This partial display at Woodward and Congress lasted a day in July.

That phrase is near the top of Gilbert's response four months ago to a flap over a short-lived partial window display at the vacant Vinton Building, where only white faces appeared with the slogan "See Detroit Like We Do." The complete banner, which hadn't been finished at Woodward and Congress, "was a very inclusive and diverse set of images that reflects the population of the city that we do business in and also reflects the diversity among our own workforce in Detroit," Gilbert says.

What is important is that Detroit comes together as a city that is open, diverse, inclusive and is being redeveloped in a way that offers opportunities for all of its people and the expected numerous new residents. . . .

Diversity and inclusion are core fundamental values to our entire mission of helping to grow Detroit’s population, driving job growth, and increasing economic opportunity for all.

Acting in Haste or with Neglect?

Now, with its choice of photos from two tenants' grand openings, Bedrock reinforces a sense that it still doesn't see Detroit as others do.

That doesn't mean anything intentional is afoot. The two scenes with mostly white shoppers could reflect a rushed project or an oversight. But for a second time in four months, downtown's pioneering developer and largest landlord seems tone-deaf and misses a chance to walk the talk.

White shoppers, nightlife patrons, workers and downtown residents aren't the only ones enjoying the revival Bedrock helped lead. They shouldn't be the only, or nearly the only, ones pictured in an "advertorial" promotion.

"So, who missed this? Again," tweets radio talk show host Karen Dumas of Detroit. A local attorney, William Noakes, repliues: "When one's consciousness doesn't extend to those who don't look like you, their absence goes unnoticed."

In a Reddit discussion of Thursday's sponsored presentation in The News (a thread this writer started), one member comments:

This kind of orchestrated outrage is getting really old and de-legitimizes actual calls of racism when appropriate.

These are unstaged photos of people simply shopping downtown. Why is it the random cameraman's responsibility to wait around for an ethnically diverse crowd to enter a store?

Our response, in part:

If this was a photo taken at a moment in time, why complain? We know the majority of Detroit is black. . . .

Do you want them to stage a photo as a means of promoting diversity or would you like to see a photo that reflects that it really doesn't matter who is in the stores? [The news is] there are stores with customers.

I guess I am tired of the word diversity, since it in itself seems to create a narrative that separates humans into segments. I love Detroit, I love the many faces of those in Detroit, let's move past the color of those faces and be Detroiters first.

Bedrock reply: '22 out of the 36
vendors are minority-owned'

As Detroit's largest minority employer and largest employer of Detroit residents, Bedrock and the entire family of companies has been and always will be a big believer in diversity and inclusion.

The branded content article Bedrock placed in The Detroit News is just one piece of a lengthy, multi-faceted 'Winter in Detroit' campaign with many photo and video assets that will appear across a wide variety of different mediums throughout the duration of the season. These outlets include but are not limited to The Detroit News, the Detroit Free Press, Michigan Chronicle, Tell Us Detroit, Detroit Smart Pages, Radio One, iHeart Media, WDET, MetroParent, Rolling Out Magazine and more.

It's important to Bedrock that all of our community outreach efforts are inclusive of everyone in Detroit. For this particular campaign, we engaged local marketing firm The Allen Lewis Agency and worked closely with them.

We are proud to support local small businesses this holiday season with the Downtown Detroit Markets -- 22 out of the 36 vendors are minority-owned -- which reflect the talent and creativity that continue to make this city an incredible place to live, work and play.

Click here to check out our website and promotional video, which contains the full breadth of our visual assets for the campaign.

Gallery: Detroit residences in 'Caterpillar' are pitched as 'a new age monument'