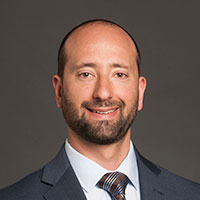 It wasn't that Elrick was delving too deep. The cringe-worthy response came after Leland essentially told Elrick that the "personal matter" was none of his business.

The elected official was dating Jennifer Fiore, daughter of crooked businessman and towing king Gasper Fiore, who recently pleaded guilty to bribing a Macomb County official. Jennifer Fiore is a lawyer and executive in some of the Fiore family's companies.

While dating, Elrick reported that Leland voted for at least four contract extensions or amendments for Fiore family companies worth $2 million. Gasper Fiore has companies that the city paid to remove snow from city streets, tow cars and lease property to the Detroit Police Department.

The Fiore contracts and amendments likely would have passed without Leland's vote. But by any reasonable standard, he should have disclosed his conflict of interest and recused himself from voting.

He didn't act illegally because his vote didn't involve a direct relative, Elrick reports. But he certainly crossed ethical lines.

In his report, Elrick described Leland's relationship with Jennifer Fiore as on-and-off again.

But the questions don't end there.

Late last month, The Detroit News reported that an FBI document says Police Chief James Craig "briefed Gabe Leland about the towing case, and Leland has briefed the Fiore family about it." The FBI has been investigating towing practices involving Gasper Fiore. Earlier this week, former Deputy Police Celia Washington pleaded guilty to taking $3,000 from Fiore in a bribe related to his towing business.

In an interview, Craig told the News that he never told Leland anything about the FBI investigation. He said he contacted the FBI after a meeting last year with the Detroit city councilman.

"He said he wanted to meet with me for the purpose of discussing something unrelated to towing, but once he gets into the meeting with me, he starts asking about the towing investigation," Craig told The News. "It's not my investigation, so I didn't have anything to give him. I never felt comfortable with him, so I made sure to have a witness in the room with me during this meeting.

"I was not comfortable with Leland's questions, and I immediately contacted the FBI as soon as he left the room and told them he was asking me questions about the towing investigation."

That only raises more questions as to what Leland was up to.

As Detroiters, we expect better and need to demand better.

At minimum, the council should investigate to determine if any action should be taken against Leland. The council needs to it clear its members should be held to a high standard.

Leland did not respond to an email and phone call asking for comment.