Selweski: Hate Group Cozies Up to 2 Macomb Cities; What Does That Say About Them? 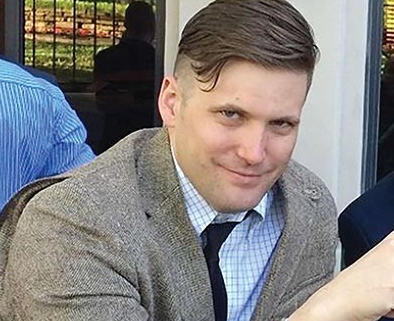 As far-right figure Richard Spencer prepares to deliver a controversial speech at Michigan State University on Monday, his ultraconservative followers did not schedule events near East Lansing before or after the appearance.

Instead, they planned to congregate about 100 miles away in Warren and Sterling Heights.

What does that mean? After all, the Spencer-backed Foundation for the Marketplace of Ideas has been labeled a hate group or neo-Nazi group by civil rights organizations. In numerous cities across the nation, Spencer and his allies have faced heated protests at college campuses, sometimes sparking violent opposition.

Over the weekend, both Macomb County gathering places cancelled the two celebratory parties planned by the alt-right group after the owners of these sites were alerted by police and the public about their white supremacism.

Why Sterling Heights and Warren?

Perhaps it's because both cities have been associated with racist or xenophobic diatribes, expressed by the Warren mayor and a 2015 Sterling Heights mayoral candidate.

In Warren, a series of secret recordings that were leaked about a year ago found the mayor of Michigan’s third-largest city engaging in talk that could be described as nothing less than virulently racist.

“Blacks do look like chimpanzees,” Fouts remarked on one audio recording obtained by the media. “I was watching this black woman with her daughter and they looked like two chimps."

On another tape, he used the word “nigger.” In reaction to the controversy, a former Fouts political consultant chimed in online: “He dropped a series of N-bombs in meetings I had with him regarding the Connor Creek charter school. (The) school was to be predominately African American. It’s tough to describe, but he actually stood up and did a monkey dance and mimed eating a banana.”

Could it be that Spencer’s fellow retrogrades saw the Fouts’ controversy, which has largely faded, as an indication that many Warren residents believe – wink, wink – in that point of view?

Neighboring Sterling Heights has also been tainted over the past few years by a series of events that portrayed the city as a bastion of bigotry.

A proposed mosque in a residential area generated a widespread distribution in 2015 of Islamophobic leaflets, followed by anti-Muslim protests and raucous city council meetings.

A leader of this incendiary opposition movement was right-wing mayoral candidate Paul Smith.

He and his wife, council candidate Moira Smith, refer to Latino immigrants as “wetbacks” and gays as “fags.” At one rally, Paul Smith displayed a protest sign depicting President Barack Obama’s severed head on a metal pole.

Smith and his slate of council candidate allies lost in 2015, but some returned in the 2017 city elections. One candidate urged the city to determine which Muslim immigrants can live in Sterling Heights.

That kind of ugliness does not fade fast. Spencer’s followers had reason to think they were entering friendly territory by gathering in Sterling Heights before the speech.

Those in charge at the Carpathia Club and Tipsy McStaggers apparently weren't aware they had thrown out the welcome mat for Spencer’s reactionary rogues. According to the Detroit Free Press, the Carpathia Club innocently booked a cocktail party from 7 to 11 p.m. Sunday featuring a generous amount of appetizers and an open bar. And Tipsy McStaggers had reserved the entire bar for a six-hour party Monday night that was to feature a DJ and karaoke.

Those interested in attending this two-day “conference” were reportedly told to register by Feb. 9. Those who missed the deadline but still wanted to attend had to go through a "thorough vetting" process and they would not have access to the itinerary of events until the night before. They were urged to book a room at the Holiday Inn in Warren.

That bit of clandestine maneuvering counters dramatically with the Spencer speech, intended to generate maximum publicity and campus outrage. MSU dealt with these shenanigans rather nicely.

When it wouldn't allow a permit for Spencer’s spectacle due to safety concerns, he sued the university. Through negotiations, the Michigan State legal team arranged a compromise: a Monday speech in a rural section of the sprawling campus during spring break, at a facility that teaches the raising and breeding of farm animals.

So, the white supremacist will deliver his remarks amid the cows and pigs – perhaps an appropriate location for dirty politics.