The author, an American artist in Berlin, deconstructed a Detroit home in 2015 and shipped it to Germany for display as the "White House" project. His next project in 2016 was deconstructing a home Rosa Parks lived in on South Deacon Street, then rebuilding it for exhibit in Berlin. He planned to reconstruct it at Brown University in Rhode Island until it abruptly withdrew approval. He writes about his project and the history of race and slavery in the U.S.

Before getting involved in the Rosa Parks House Project, I had lived in Berlin for 25 years. 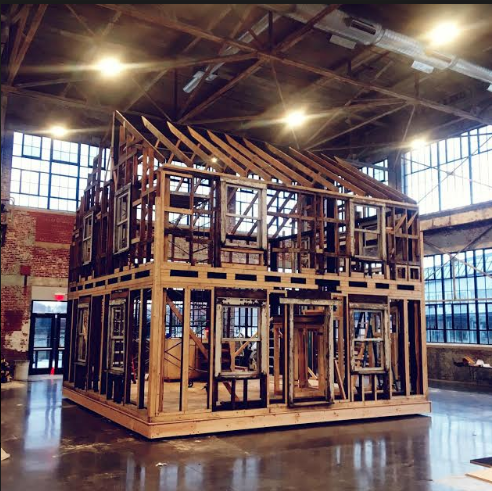 Having lost touch with my country. I thought rather than distance myself further from American values, I would embrace them fully in attempt to epitomize the quintessential American by colonizing Europe with actual American houses.

The White House Project began with a house donated by friend, native Detroiter Gregg Johnson. The house was appropriately -- though not without controversy -- removed from Stoepel Street just off of Eight Mile, the road that divides a predominately black Detroit.

​After The White House Project was brought to Europe to the Verbeke Foundation I had gained adequate knowledge of how wooden houses could be disassembled and reassembled.

​On my trips back and forth to Detroit, Gregg Dunmore and Joel Boykin of Pulsebeat TV put me in contact with Rosa Parks’ niece, Rhea McCauley.

​I met Rhea on a wintry day in front of 2672 S. Deacon St. where the three-bedroom house Rosa Parks had lived in with 15 family members stood in a decaying stoicism. I remember the floors were dipping and the house moved ever so slightly with the wind. The back wall was patched together with the doors of the house itself.

Rhea McCauley, who had lived in the house with her aunt, had recently bought it off of a demolition list for $500. When local government and institutions showed no interest in helping her restore the house as a monument, she approached me and suggested we work together. Our petition for local support was also turned down, so I offered to ship the house to Berlin. It proved essential that the house be extricated from its location for the world to pay attention.

​For lack of a more appropriate place, the unassuming house Rosa Parks had taken refuge in after the tumultuous Alabama bus boycott, was temporarily relocated to the garden between my studio and my home in Berlin.

Last winter, the house arrived to my doorstep as planks of wood in a shipping containe. It was rebuilt from sketches made during disassembling in Detroit.

Reconstructing the house alone, and underfunded during the winter of 2016 was a physically challenging task. But  I considered whether the house would become one day the 77th monument to the civil rights movement. 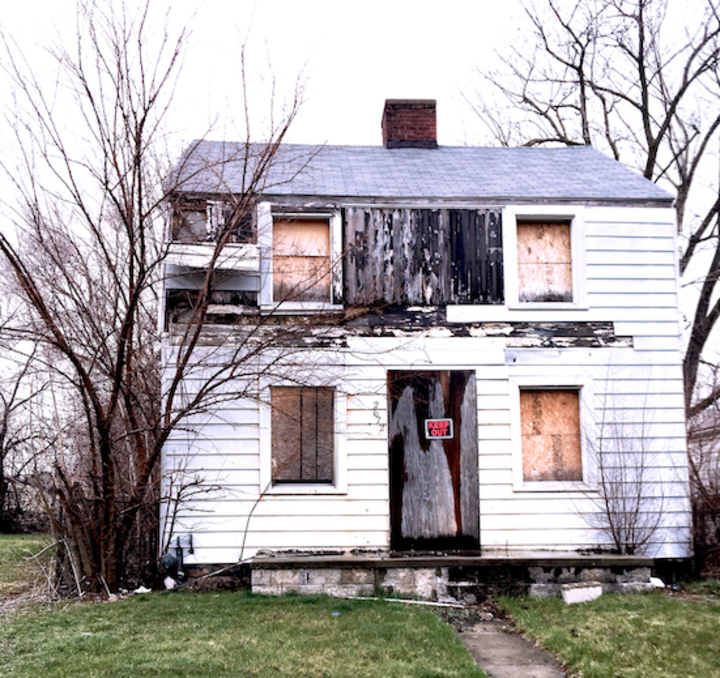 The Rosa Parks home in Detroit (Photo by Fabia Mendoza)

I read up on American history where our forefathers were also slave owners and I struggled with this cognitive dissonance.

Thomas Jefferson was undeniably a racist as well as a rather abusive slaveholder, notably punishing his slaves by selling them at auction, willfully breaking families apart. His only plausible solution to the problem of slavery included expatriation:

“I can say with conscious truth that there is not a man on earth who would sacrifice more than I would, to relieve us from this heavy reproach if, in that way, a general emancipation and expatriation could be effected: but, as it is, we have the wolf by the ear, and we can neither hold him, nor safely let him go. Justice is in one scale, and self-preservation in the other.”​​​​​
-- Thomas Jefferson to John Holmes, April  22, 1820

Jefferson worried the flesh would be ripped from the face of the nation, revealing an unsavory truth.

But with mounting evidence of systemic racism, and with clarity over what the confederate monuments actually stand for,  I felt the Rosa Parks House needed to be preserved and possibly celebrated. That thought contrasts with its near demolition by the local government in Detroit.

During the reconstruction of the house, while handling delicately the planks of wood, I wondered, was my mission to preserve history or free the ever-ensnared Jeffersonian wolf and upsetting a national myth?

In the end, I realized I am just custodian and messenger. Considering I myself am white and born after the Civil Rights Movement, I can comprehend the weight of all this in only a limited way. 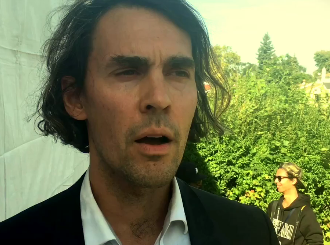 Ryan Mendoza: "This is a project about memory." (Deadline Detroit photo)

After living for two years with her brother, sister-in-law and their 13 children, Parks moved multiple times. She suffered an assault in her home at age 81 and was threatened with eviction at 91.

While Detroit was briefly renowned as a place where black residents reached significant levels of home ownership, Rosa Parks never owned a home.

She called Detroit "the Northern promise land that wasn’t." Housing issues, which centered around segregation and displacement due to urban renewal, were central to Rosa Parks’ activism her entire life.

Detroit has ranked among the 10 most segregated metropolitan areas in the United States since the mid-20th Century. By the early 1960s, urban renewal and highway construction destroyed 10,000 structures in Detroit, displacing over 40,000 people, 70% of whom were African-American. More recently, the housing crisis, foreclosures and demolition have swept the city, leaving more abandoned buildings and vacant lots.

​For over 40 years, these four walls and roof were a home. It was the place that Rosa Parks’ brother sought to create a better life for his family after returning from World War II, where Rosa Parks’ nieces and nephews grew up and where Parks lived for her first two years in Detroit.

When the family left in 1982, memories continued to cling to the clapboards, but the home became a house. When it was put on a demolition list in 2013, the meaning attached to the building changed again;  it became a number on a list, a statistic in Detroit’s decline. In its ensuing incarnations, the structure blurred lines between historic monument and art object.

​Ultimately, this is a project about memory. By taking the house apart and then piecing it back together, literally re-membering it, Rhea McCauley and I invite the American consciousness to remember a house it didn’t know it had forgotten.

The house offers a unique opportunity to consider how we remember Rosa Parks, and in doing so, we begin to renegotiate how we memorialize American history. 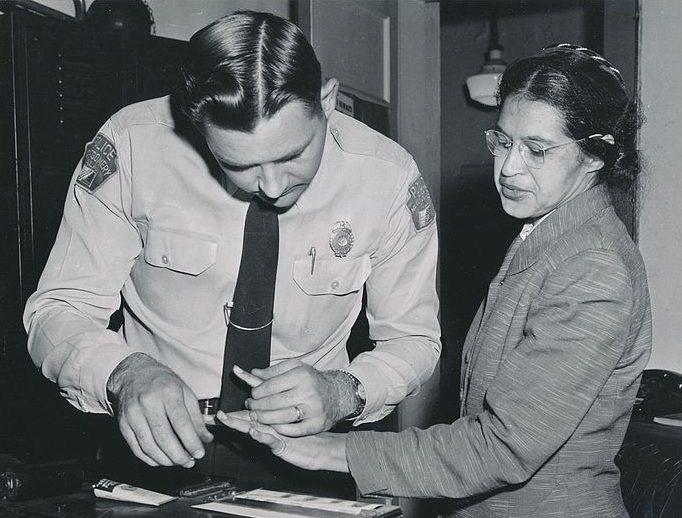 ​Recent debate surrounding the dismantling of confederate monuments indicates the persistent significance of how we inscribe memories into the topography of our surroundings. Seven hundred monuments of Robert E. Lee and other Confederate generals still parade across public squares and school grounds across the United States, despite a recent wave of dismantling.

​In her biography, The Rebellious Life of Mrs. Rosa Parks, Jeanne Theoharis exposes the ways in which the historical narrative surrounding Rosa Parks has reduced her lifelong commitment to activism to one afternoon on a bus.

Theoharis emphasizes, “One of the greatest distortions of the Parks fable has been the ways it made her meek…When Parks died in Detroit in 2005, she was held up as a national heroine but stripped of her lifelong history of activism and anger at American injustice. The Parks who emerged was a self-sacrificing mother figure for a nation who would use her death for a ritual of national redemption.”

​My hope is that, by contrast, the dissonant context at play in the Rosa Parks House Project will impede nostalgia and obstruct simplification. The cognitive dissonance of this house’s journey across the sea should inspire questions and bring out a fuller version of history.

​Now that the house has been repatriated, Brown University has asked  that it go to the WaterFire Art museum for a temporary exposition.

The school is named after a prominent mercantile family who members were Rhode Island slave traders. But the College of Rhode Island was so taken by the generosity of the Browns that in 1804 it renamed itself Brown University.

When that legacy came to light in 2006, it brought dialogue about the complex history. This is the backdrop in the presentation of the repatriated Rosa Parks House, with Brown’s students acting as a kind of jury, the university a courtroom, and the house, evidence in a trial where Jefferson’s idea of self-preservation will be put to light.

​In the wake of last August's violence in Charlottesville, Va., Donald Trump commented:

"So this week it's Robert E. Lee, I notice that Stonewall Jackson's coming down. I wonder: Is it George Washington next week, and is it Thomas Jefferson the week after? You know, you really do have to ask yourself — where does it stop?”

Belying his rhetorical intent, Trump touched upon an important question: As Americans, we have accepted the mythology of our nation’s founding for so long without sufficiently grappling with the violence against those the country is built upon.

​​Brown considered renaming itself some years ago, but couldn't settle on a more appropriate one.

Imagine, however, if the Browns had had a different last name, one that did not refer to the skin color of the Africans they had enslaved. Had the university been called Green University or White University, perhaps there might have been more energy put into finding a more suitable name-change.

Jefferson University has a nice ring to it, but it appears to already have been taken. I wonder, is there a Rosa Parks University?