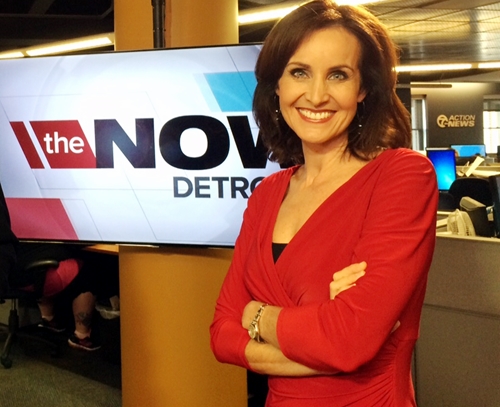 JoAnne Purtan: "What a ride it's been!"

JoAnne Purtan, a fixture on WXYZ TV for 20 years, is getting cut from the station, Crain's Detroit Business reports.

In a Facebook post Friday, the daughter of legendary radio personality Dick Purtan writes that she was "shocked" and "disappointed" to learn her contract as anchor is not being renewed after this month.

She's anchor of the noon newscast and a 4 p.m. newscast called "The Now Detroit," as well as doing consumer reports and a weekly segment on mothers who are entrepreneurs.

Purtan came to the station in 1998 after seven years as an anchor and reporter in Albany, N.Y. "I just knew from the time I was a little girl this is what I wanted to do," the Emmy winner says in a bio at the ABC affiliate's site. "I love telling people's stories and bringing viewers important information."

WXYZ has recently lost some star power. Anchor Stephen Clark just retired. And morning Anchor Malcom Maddox was removed from the air this week following a lawsuit by former reporter Tara Edwards, who accuses him of lewd, sexual misbehavior.

I learned recently that due to corporate restructuring of the Scripps-owned television stations and cost-cutting initiatives, my contract with WXYZ-TV will not be renewed when it expires this month.

As shocked as I was, and as disappointed as I still am, I want to focus instead on my gratitude for all of you. I have had an amazing 20 years at WXYZ-TV because of you, our faithful viewers. I can’t thank you enough for inviting me into your homes and your newsfeeds through the years, trusting me to bring you the stories, both good and bad, that impact our local communities. I’ve never taken that trust for granted. We've laughed together, and sadly, too many times, as you’ve shed a tear at home over a story, I’ve fought back tears on the set.

This is an amazing city with a storied history that I’ve been blessed to help tell. Today, what a comeback story we’re all witnessing! I see it each day as I broadcast our noon newscast with a bustling Downtown Detroit as my backdrop.

It’s truly been an honor to be a part of bringing amazing events to you that spotlight our great region, like the North American International Auto Show, the Woodward Dream Cruise and the Detroit Grand Prix. What a ride it’s been!

Outside of the daily news, I’ve told you all, “Don’t Waste Your Money” probably more times than you wanted to hear it! :) I've also had the incredible pleasure of profiling amazing entrepreneurs who have taken risks and followed their dreams in my weekly “Mom’s a Genius” reports.

As a woman of faith, I'm confident that this life change will help illuminate other ambitions for me, both professional and personal, including being there when my kids get home from school each day.

My last day on the air is scheduled for Friday, March 23. It will be a difficult sign-off, but it will not be "goodbye." This is my hometown and I plan to remain a part of this great community. I’ve been exploring some exciting opportunities for this next chapter in my life that I hope to share soon.