This is a big deal. "Huge," tweets Preservation Detroit. "This is great," says another social media comment, one of many.

Two sources tell Crain's a deal to redevelop the 500,000-square-foot former train station owned by the Moroun family could come as soon as next month. It could accommodate the automaker's growing teams of autonomous and electric vehicle employees relocating from Dearborn, the automaker hints without confirming an imminent agreement.

"Make it the way it used to be. That is all people are asking for," Robbie Wright-Winger posts on Facebook. "Fingers crossed on redevelopment of this grand old girl," Dave Hughes comments there. 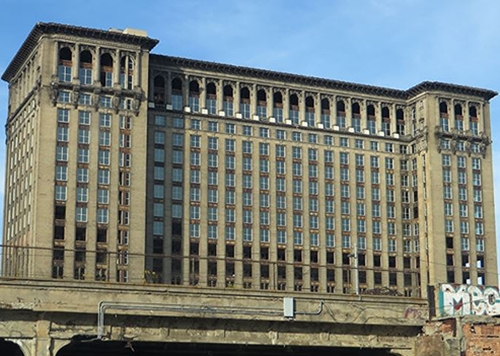 If a deal comes to fruition, it would mark Ford's biggest step back into the city where it was born, three months after announcing that it was going to put more than 200 employees just down Michigan Avenue in The Factory at Corktown building.

A redeveloped train station could house more than 1,000 workers, depending on the layout.

"While we anticipate our presence over time will grow as our (autonomous/electric vehicle) teams begin moving downtown in May, we have nothing further to announce at this time."

Multiple sources with knowledge of the situation told The Detroit News on Monday that the automaker has been negotiating to amass property around the train station, as well as buy the train station itself.

Part of that move would be for Ford to either purchase or occupy the abandoned book depository near the train station, one source with knowledge of the negotiations said. An announcement is expected on the deal by May.

The News' first coverage, about 20 minutes after the Crain's scoop, focused on Ford's possible leasing of space from Moroun and said no purchase was being considered.

Michigan Central Station, a monolith in the Beaux Arts architectural style, was open from 1913-88. Its role as a Detroit icon inspires local reverence, tourist visits and screen roles.

"This would take resurgence to a whole new level," former City Councilwoman Sheila Cockrel tells the Free Press. "Whoever does that, they will become an iconic name for rebuilding American cities."

Author and historian Dan Austin calls it a "temple of transportation" in a 5,000-word homage at HistoricDetroit.org, which begins lyrically:

Nothing symbolizes Detroit’s grandiose rise and spectacular fall like Michigan Central Station. No other building exemplifies just how much the automobile gave to the city of Detroit — and how much it took away.

For 75 years, the depot shipped Detroiters off to war, brought them home, took them on vacation and sent them off to visit Grandma. It was Detroit’s Ellis Island, where many generations of Detroiters first stepped foot into the city for factory jobs. It was filled with the sounds of hellos and goodbyes, panting locomotives and screeching wheeled steel.

But for 30 years now, it has been a place for vandals, thrill-seekers, junkies and the homeless.

News of the landmark's expected ownership change and reuse is welcomed by preservationists, architects and other admirers. These are among online reactions Monday: