'Censor' Has it in for 'Fifty Shades,' but Probably Not Because the Movies Suck 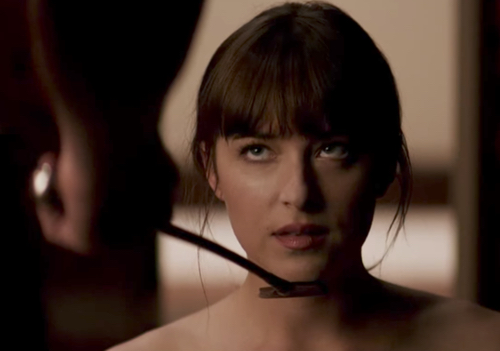 Two famous parents and acting classes, for this? (Screen capture)

One person's censorship is another's quality control. Or maybe it's just censorship-via-sabotage.

Whatever you want to call it, an unknown party or parties at the Berkley library hides DVDs of the "Fifty Shades" trilogy o' crap, along with "Eyes Wide Shut" and "Jerusalem," a documentary, the Free Press reports.

The video discs aren't showing as checked out, but are missing, which suggests someone went to some trouble to conceal them within the library. It's a Nancy Drew mystery waiting to be solved! "The Case of the Missing Soft-Core" would fly off the shelves.

But we digress. The Freep goes on:

To fight back against the self-anointed censor, the library is displaying the recently found missing movies with a sign that reads: "The Berkley Public Library is against censorship. Someone didn't want you to check these items out. They deliberately hid all of these items so you wouldn't find them. This is not how libraries work.”

A year ago, she said, the second of three "Fifty Shades" movies, "Fifty Shades Darker," also went mysteriously missing. The library bought a new copy of that movie and nothing else happened.

"This time they went missing and because of it happening a year before, we kinda had a feeling it was deliberate," Arnsman said.

We're stumped by "Jerusalem." Haven't seen it, but it's narrated by Benedict Cumberbatch. Maybe he's the problem.