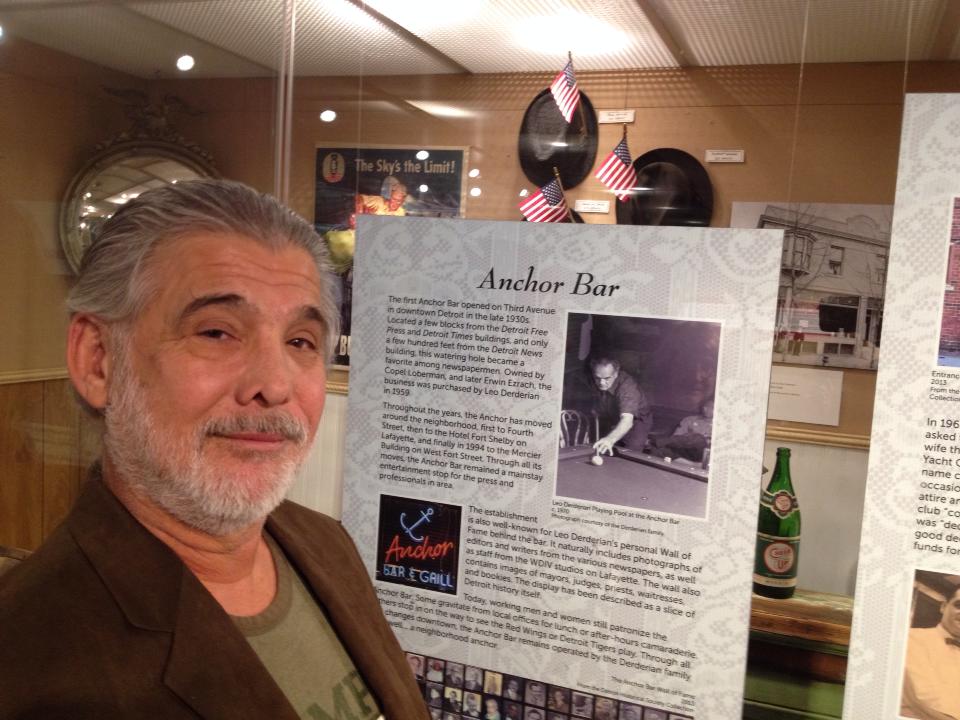 Vaughn Derderian, a schmoozer extraordinaire, recalls the FBI raid in May 1971 at the Anchor Bar his dad Leo ran. Agents rounded up about 150 people around Michigan, including Leo and 16 Detroit cops, as part of a $15-million a year gambling ring run out of the Anchor. The news even made the New York Times.

“That’s probably one of my favorite stories,” says Derderian, 71, who has plenty more from where that came from.

Now, Derderian and his son, who operate the popular dive bar are writing their final chapter at 450 W. Fort St. They’re cashing in on the downtown comeback and will sell the bar and building to Zaid Elia, whose Metro Detroit properties including Parc in Detroit’s Campus Martius and 220 Merrill in Birmingham. The deal is expected to close in late September.

The price for the site, including retail and office space, isn't disclosed. It’s likely to be in the low seven figures, based on commercial real estate values downtown lately.

Fortunately, Derderian says, the new owner wants to preserve the legend of the family-owned bar -- a magnet for journalists, cops, federal agents, office workers and Wings fans -- and its countless stories, some of which will be displayed on walls and menus.

“When he buys something, he wants the history with it," he says.

♦ Reactions: News of Sale Opens Flow of Coloful Memories About the Anchor Bar

Says Elia: “When you meet Vaughn and all the people going to the place you start to realize this place is filled with rich tradition and history. The stories he has are awesome.”

“Honestly I’ve never been more excited about a project. When you see what this restaurant stands for and you hear every story Vaughn tells, it’s like sitting in a time machine.”

“My goal is to keep the integrity of the bar,” he says, adding that he plans to change very little and remodel just areas worn with age. 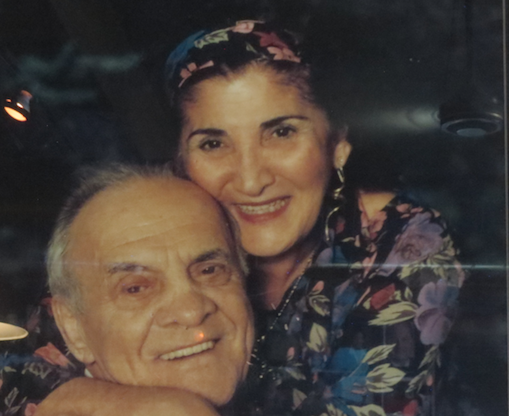 Leo Derderian and his wife Adeline.

As for the menu, he says: "We’ll keep the most popular items, but definitely bring some culinary twists.”

In 1959, Leo Derderian, who was operating a grocery downtown that doubled as a horse racing parlor for gamblers, bought the Anchor Bar and moved it from Third and Howard Streets to Fourth and Fort. In 1975, it landed on Lafayette Blvd., a block from The Detroit News. Then in the 1990s, it moved around the corner to its current spot in the Mercer Building.

Leo was a character out of a Damon Runyon book. He worked the crowd and could connect with anyone from politicians to priests to gangsters. His son Vaughn started helping his dad run the joint full time after he graduated from Oakland University in 1970.

"He treated his good customers like they were members of the family, and you almost were," veteran sports reporter Mike O'Hara says of Leo Derderian. O'Hara was a pallbearer at his funeral 24 years ago and remains a close friend of Vaughn's.

"Vaughn picked up the business from his father and ran it the same way, with a little different style," O'Hara says. "Everyone was welcome as long as you acted like a family member." 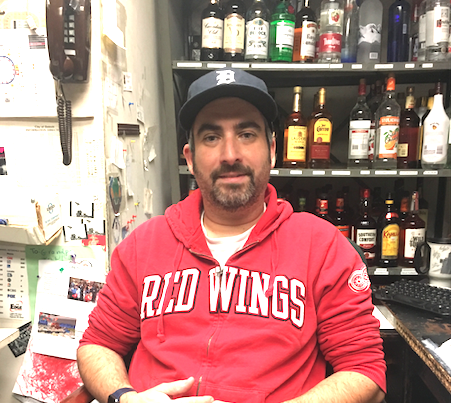 Now, Vaughn's son, also named Vaughn, has been running the joint along with his dad.

Droves of journalists have called the Anchor Bar home over the decades. It was a place to celebrate retirements and new jobs and departures, and mourn deaths and life's setbacks.

In the old days, some reporters and editors would drink their lunch or dinner. Some ran up tabs, some of which the elder Vaughn Derderian would forgive and tear up.

When I was a reporter in the Lansing bureau of The Detroit News, I sometimes had to call my editor at the Anchor at the end of the day to get him to return to the office and finish editing my story so I could go home. By then he’d probably polished off a Manhattan or two or three.

One day I was having a beer and an FBI agent I knew was having a pre-wedding, bachelor party in the backroom. I was invited back by one agent, only to be asked to leave after one of the agents in attendance, who I had once written an unfavorable story about, insisted I go.

When I was on strike at The News from 1995-97, we often went to the Anchor for lunch where Derderian offered lunch specials for strikers. For a stretch of time, the upstairs was headquarters for the strike. 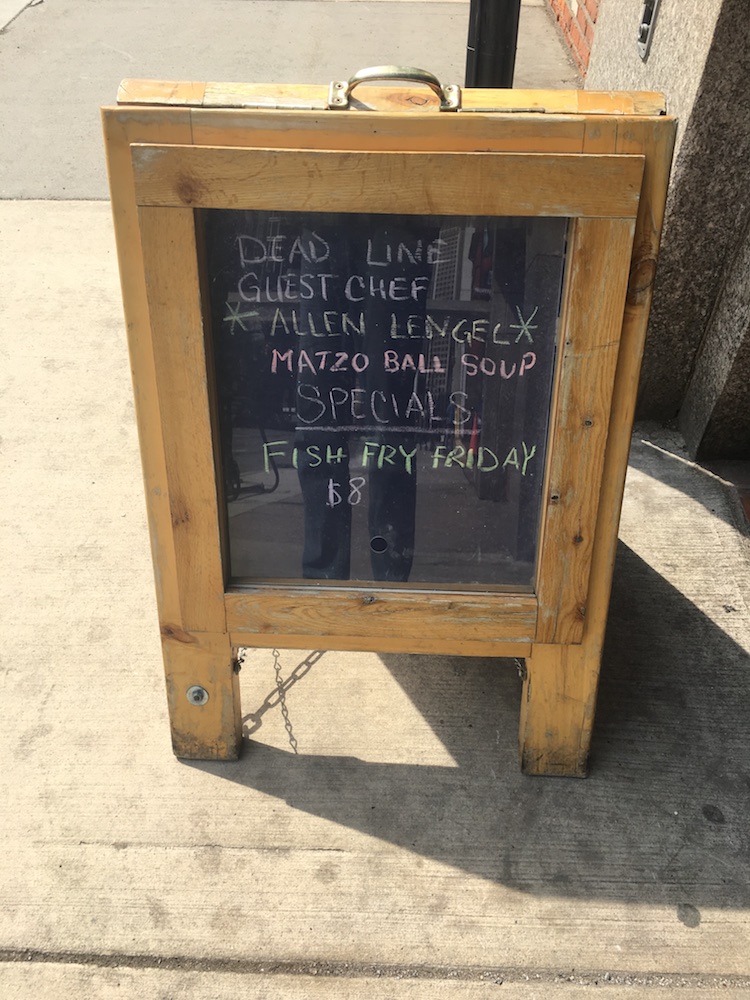 Deadline Detroit's Allan Lengel was a "guest chef" last year at the Anchor.

In March 2017, I was a "guest chef" on a Friday and made matzo ball soup for the lunch crowd.

Derderian has a place up north, where he plans to settle full-time.

“I enjoyed it," he says of his long run at the bar. "I made some very close friends and that’s a pretty key thing in getting by in the world."

He notes that he’s fortunate over the nearly 25 years at the Fort Street location, that there's only been about five or six serious bar brawls, and he's grateful for his workers, whom he plans to distribute bonuses to from the sale's proceeds. The workers are expected to stay on board.

His son, Vaughn, 41, says he’s interested in becoming more politically active, and in the short term, at least working on a current campaign.

“As much as I love working in Detroit and being a part of the city, there’s been a lot of times it’s been really hard. People underestimate how hard it is in the bar business."

What he'll miss most isn't really there any more.

For decades, the Anchor was considered a pre-game destination for Red Wings fans. The place was often packed, elbow-to-elbow with customers in red jerseys, drinking beers, eating burgers, grilled chicken sandwiches and wings. But last year, when the Red Wings moved to Little Caesars Arena, most of the that business vanished.

As downtown has flourished, other customers have filled the void.

"What I really loved was the connection we had with the Red Wings hockey fans," he says. "That was really a special part of my life for a long time."

About 100 photos of dead customers hang on the wall, above the bar.  Many are reporters from decades ago, along with cops and crooks. Leo Derderian is also up there along with his close friends, the late Monsignor Clement Kern and Detroit Mayor Jerome P. Cavanagh. Separately, near the entrance, is a photo of a smiling Mayor Coleman A. Young sitting inside the bar.

Elia says Derderian will take some of the photos, and he’ll put some of the others on the wall.

Derderian and Elia admire each other, having gone through negotiations for the past seven months or so.

“He’s fantastic, I really believe in him a lot,” Derderian says. “We always had a very congenial relationship and he likes to hear my stories."

“He wants me to write down my 10 favorite stories about the bar and he wants to characterize them on the wall. The raid (in 1971) is the greatest story.”

In fact, a little history of that raid can be seen on the paper menus that are placemats:

On the morning of May 6, 1971, two pool players at the 4th Street Anchor broke off their game, jumped over the bar and announced: "This is a raid!" Thus began the most cockeyed fight in Justice Department history.

Hundreds of Detroit Police and 400 FBI agents assembled that morning at Cobo Hall to collet and indict 150 civilians and 16 police officers. Leo (Derderian) and Chickie Sherman were accused by the Feds of running a $40,000 a day gambling ring. Access to the basement bar was aided by the Detroit News, which owned the building, in exchange for scooping the Detroit Free Press. After three years of court battles, the entire case was thrown out because the Nixon Justice Department had forged wiretap authorizations.

Lead government attorney David Cook later became friends with Leo, and in 1996 held his retirement party at the Fort Street Anchor. He said: "If I knew then what I know now, there never would have been a raid."

The Derderians won’t vanish from the scene, at least not completely. The younger Vaughn will stick around after the sale for a while to help with the transition. His father says Elia has agreed to help him continue raising money for those in need through the Most Holy Trinity Church in Corktown, a passion that began with Leo Derderian and was passed on.

Besides that, the older Vaughn says, Elia “wants me to come around. If he calls, I’ll come by.” 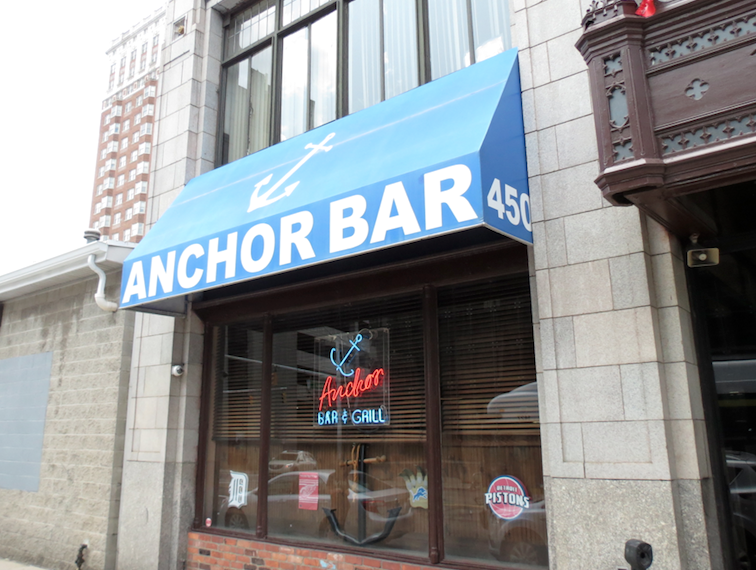 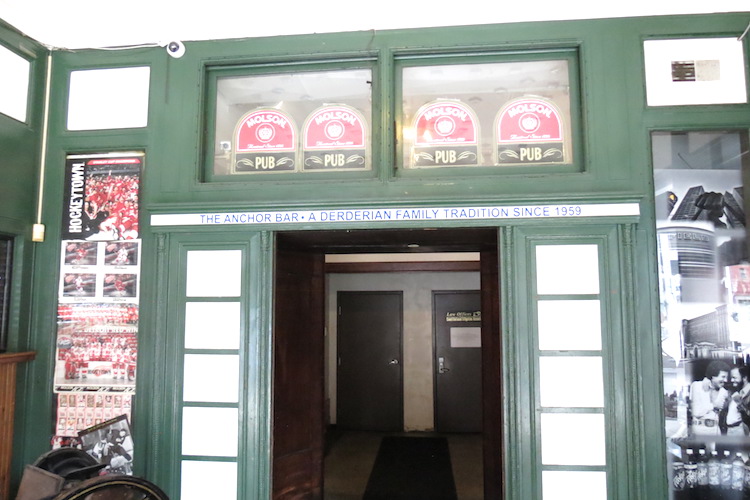 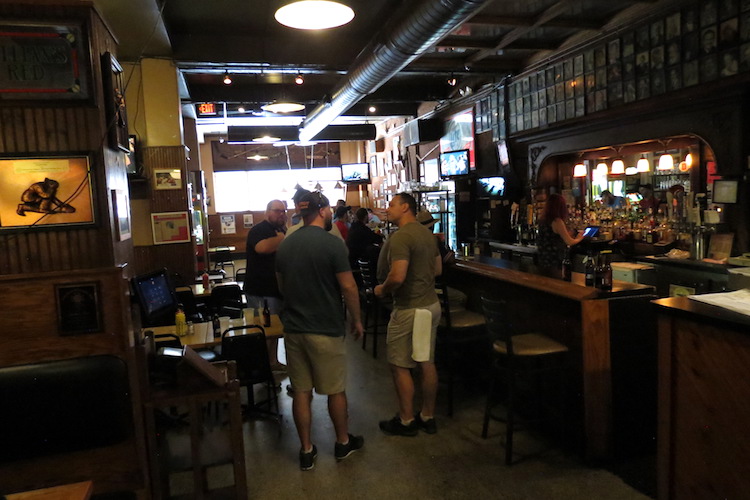 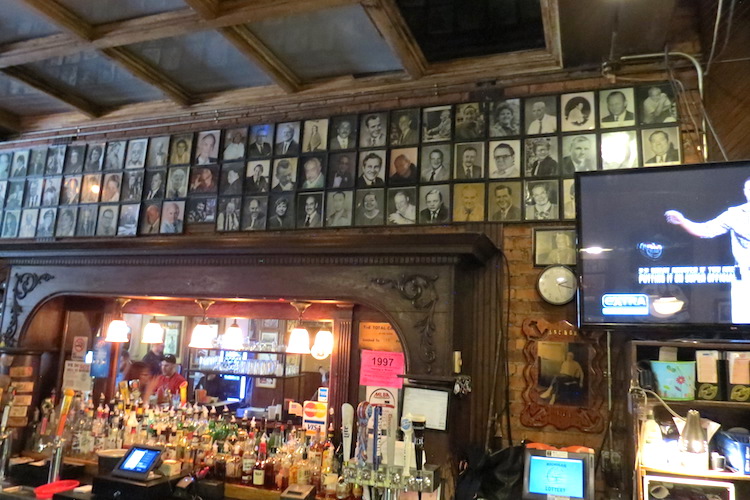 The wall above the bar includes dead journalists, cops and politicians. 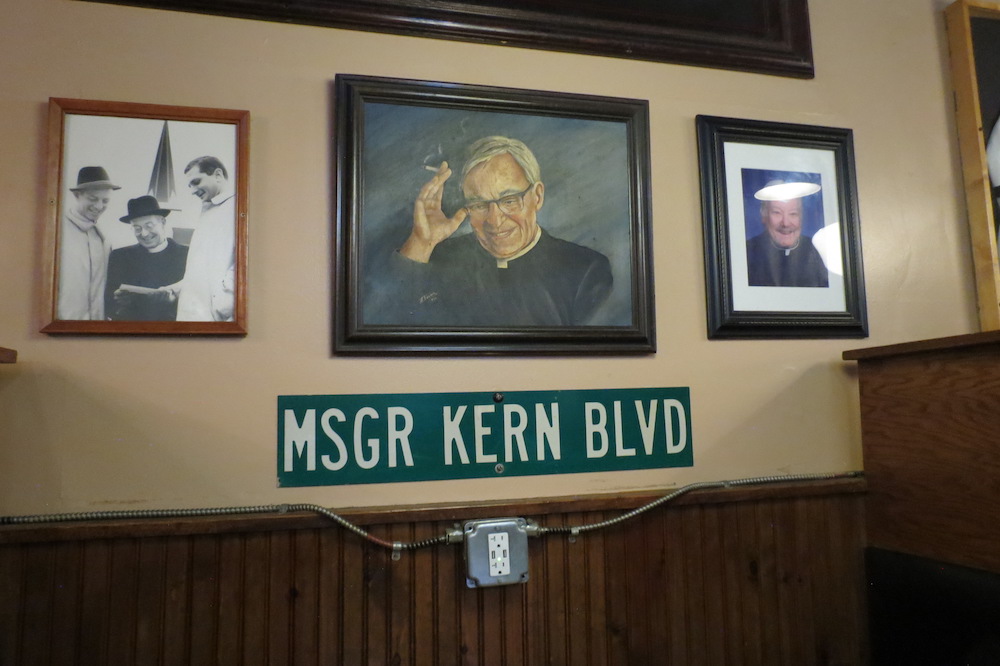 Msgr. Kern was a close friend of Leo Derderian. 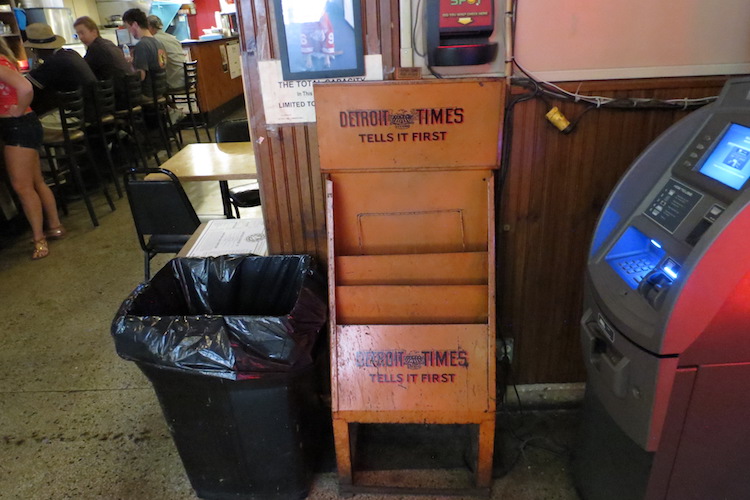 A piece of newspaper nostalgia. 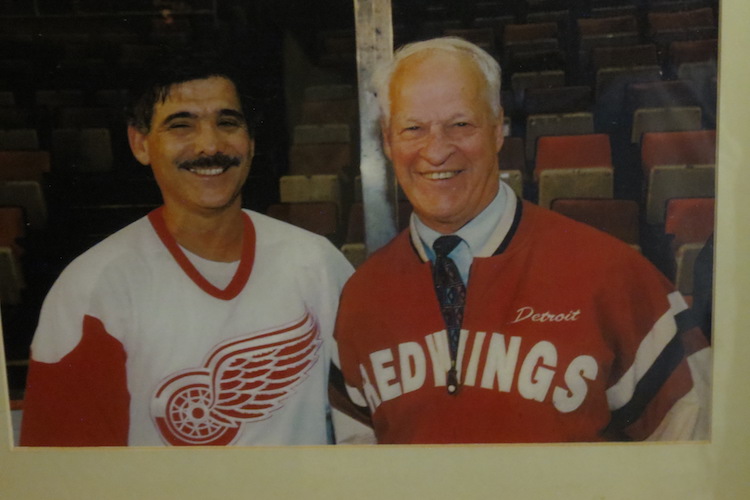 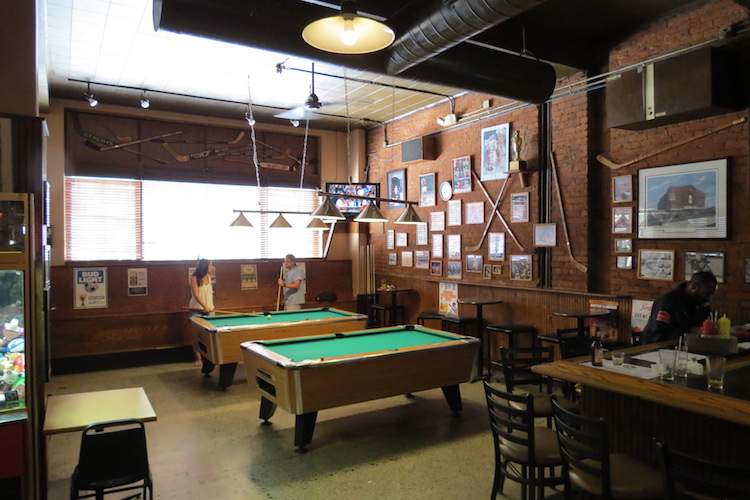