Bike Lanes Are 'an Idea That Was Carried Too Far,' Keith Crain Writes in Attack No. 2

Keith Crain's strident opposition to bike lanes remains shrill. Fifteen weeks after an attack on what he called efforts "to convert Detroit into a bicycle paradise," the chairman and owner of Crain Communications is back with another rant. 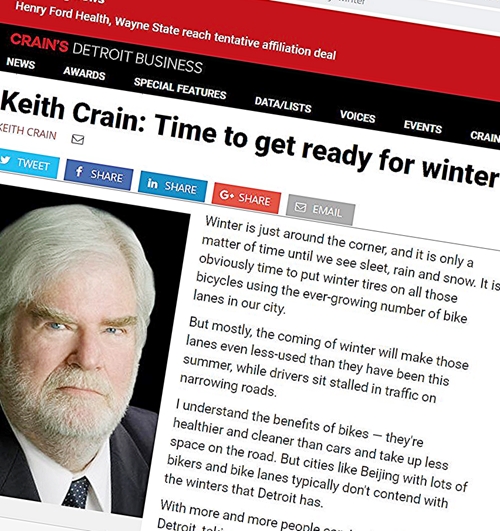 "It is obviously time to put winter tires on all those bicycles using the ever-growing number of bike lanes in our city," he says in a column for this week's Crain's Detroit Business.

But mostly, the coming of winter will make those lanes even less-used than they have been this summer, while drivers sit stalled in traffic on narrowing roads. . . .

In the winter, it will become obvious what a mistake this project has been.

Yup, back to this again -- echoing a June 17 column by Crain that drew derision locally and nationally. That diatribe criticized "these miles and miles of bicycle lanes" in Detroit, adding:

I am mystified as to why our city is spending all this money to make these changes. 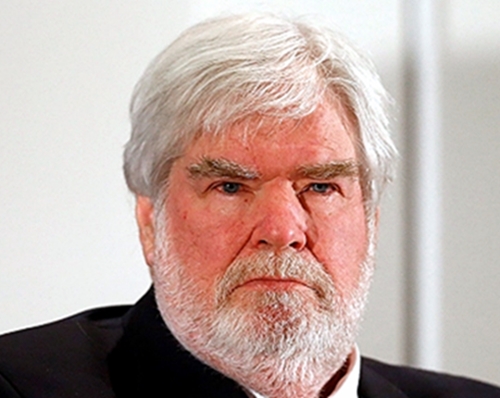 Keith Crain: "This is an idea that was carried way too far, with no end in sight."

Three months later, he's still mystified -- and miffed -- about "the waste of limited resources on bike lanes." More from the commentary posted Sunday:

I believe more will question the wisdom of spending millions of dollars to accommodate a handful of bikers, notwithstanding the new scooter renters, as winter sets in.

This is an idea that was carried way too far, with no end in sight. I can only assume it will continue to spread until someone, perhaps a new set of politicians, realizes the error. . . .

With more and more people coming into downtown Detroit, taking away lanes on major arteries only makes traffic worse. And those bike-lane dividers certainly don't seem like they'd make plowing any easier.

I am still waiting for the bikeification of certain streets such as Gratiot or Woodward or Grand Boulevard. I can only assume that will be slightly before we see bike lanes on I-75 and I-94. Maybe they are Detroit's answer to the lack of mass transit in Southeast Michigan.

B - I - N - G - O, Keith. Now you roll with a sensible thought about bike lanes: Maybe they are Detroit's answer to the lack of mass transit in Southeast Michigan.

"The City of Detroit has a plan to keep our bike lanes clear. We’ll be salting the lanes and roads to keep them clear of ice and plowing bike lanes when snowfall is heavy. We’re committed to ensuring Detroiters have mobility choices year round."