Campaign-season criticism that Gretchen Whitmer is "bought and paid for" by Blue Cross Blue Shield of Michigan will apparently follow her to the governor's mansion.

After a steady stream of attacks from primary and general election opponents over her relationship with the insurer, Whitmer's first big move as governor-elect was to name its CEO, Dan Loepp, to her transition team. Last week's move has angered members of her party's left flank, many of whom despise corporate influence in politics and want to see the profit motive taken out of health care. They're now calling for Loepp's removal in a petition at Change.org. It had more than 620 signatures as of Monday afternoon. 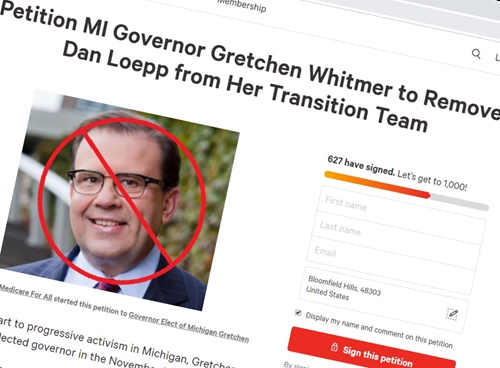 More than 600 backers get on board.

"Our main concern is the level of influence Dan Loepp will have behind the scenes of the Whitmer transition. Loepp and Blue Cross Blue Shield have given campaign funding to both Democrats and Republicans to protect their interests. While Whitmer rejected all criticisms that she was in the pocket of insurance companies, the decision to add Loepp to the transition team where he can represent the interests of BCBS is corrupt business as usual.

Whitmer took more than $200,000 from the insurer's political action committee and its employees during her run for governor — the most of any Michigan gubernatorial candidate in the past decade. She's the daughter of BCBSM's former CEO and describes Loepp as a "friend" who encouraged her to get into politics.

Though she helped expand Medicaid as a legislator to cover an additional 600,000 Michiganders — a move that directly benefited BCBSM — Whitmer was the only candidate in the Democratic primary who did not support single-payer healthcare. When she faced Bill Schuette in the general, he ran ads slamming her for the amount of money she'd taken from the insurer — though Schuette would almost certainly have accepted just as much if given the chance. Campaign finance records show he's taken at least $138,000 from Blue Cross' PAC — which donates to both sides of the political aisle — in state-level races since the 1980s.

Update, Monday night: Whitmer will be keeping Leopp on her team. In a statement to Deadline Detroit, the governor-elect's transition office defendes the decision:

"Governor-Elect Whitmer is committed to bringing people together from diverse backgrounds to solve problems, which is why she has assembled a strong, bipartisan Honorary Transition Committee," the statement said. "Mr. Loepp will serve alongside medical professionals like Dr. Joe Schwarz and Dr. Mona Hanna-Attisha to help provide critical experience and insights to inform a policy agenda that expands access to quality, affordable health care for everyone in Michigan."

Earlier, former Detroit-area Democratic politician and Whitmer supporter Bob Ficano gave us a call to describe Loepp as an asset to the transition team.

He added that even though Loepp's company gives indiscriminately to Democrat and Republican candidates, Loepp the person has shown himself to have "very Democratic leanings." He noted that union officials — who typically support centrist Democrats, some would argue to their membership' sdetriment — sit on the BCBSM board.

"I know him, he was always a person of honor and integrity," Ficano said of Loepp. "When we had to negotiate rates for county employees, the employee unions considered Blue Cross Blue Shield the gold standard of what they really wanted in terms of collective bargaining agreements."

Of Whitmer's refusal to distance herself from the insurer amid relentless criticism, he said: "Let's face it — her father was president of Blue Cross. Expecting that she would completely disassociate from it is unrealistic too."