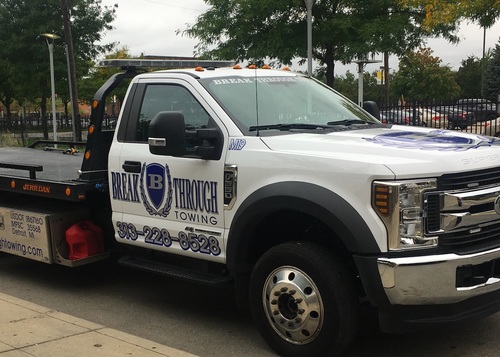 Nearly two dozen code violations have been issued at the lot where Breakthrough Towing impounds vehicles.

This repost from Nov. 21 is the fourth in a Top 10 countdown of most-read articles in 2018, a daily series through Dec. 31. Links to earlier installments are at the end.

The city of Detroit is going on the offensive against a towing company accused of predatory practices that services a number of Midtown businesses.

Breakthrough Towing — which contracts with Midtown Liquor & Deli and the McDonald's on Woodward, among others — has faced a barrage of negative media coverage in recent months for apparently using spotters to tow vehicles within minutes of their being parked and charging tow fees in excess of $400 cash. The company is also the subject of a class action lawsuit, has lost business from AAA of Michigan and has been dinged by the Better Business Bureau.

Now, Breakthrough's bottom line may be taking another hit. The city of Detroit's code enforcement division has issued nearly $3,000 in tickets for violations at the address associated with the company's impound off Michigan Avenue.

The news was the subject of a recent story by Fox 2's Rob Wolchek, who reports the head of Detroit's Buildings, Safety Engineering and Environmental Department sent an inspector out to take a look at the property after seeing an earlier story on Breakthrough. (Video below.)

"I think they should change their business practices," department director David Bell tells Wolchek. "What they're doing to people who own cars is ridiculous and it should not be happening, but unfortunately I can't enforce that. What I can enforce is the property maintenance code."

City records show 23 tickets were issued last week [mid-November] to the owner of the lot the company uses. The tickets include failure to remove graffiti ($100), failure to provide sufficient heat for indoor employees ($50), and failure to maintain a vacant building to code ($750).

Bell tells Wolchek the company hasn't responded, but he expects that they will because "we're not gonna stop until they get a certificate of compliance."

Breakthrough has said in the past that it tows customers legally, and Wolchek notes that signage in the McDonald's lot shows that even customers have a 30-minute parking limit. Many of those victimized by the company, however, have said their cars were taken when they were parked for fewer than 15 minutes.

The company is also notorious for refusing to release the vehicles of owners who show up before their car is taken. Lawyers bringing the class action say that's illegal under Michigan law.