LeDuff: This Mayor Thing Has Legs, And Bob Carmack Is on the Run 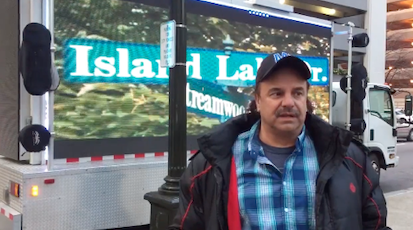 Detroit businessman Bob Carmack was reached by telephone at his place of work immediately after the mayor's extraordinary press conference Monday where he admitted embarrassing behavior without specifying what that behavior was exactly.

Media had already descended on his building, and Carmack shouted to someone to turn off the lights, turn down the radio and lock the front door.

"Did you hear the press conference? I asked.

"He said you extorted him and he's referring it to the [state] police."

"That's okay. That's good, eh eh eh," he cackled. "I got my videos, motherfucker. I'm gonna pull my shit to the feds, fuck the police."

Carmack would not supply any new details about what he had on surveillance tape concerning the mayor's whereabouts and extracurriculars, beyond statements he made to Deadline Detroit this weekend that he had the mayor "sleeping in the burbs" and " in compromising situations."

The mayor, it should be pointed out, made oblique references to the suburbs of Franklin and Warren at his press conference, but said his clothes and pets could be found at the Manoogian Mansion. He offered to give reporters a tour. Deadline Detroit took him up on his offer, but Duggan's representatives -- who one imagines are quite busy today -- have yet to respond.

Carmack also confirmed that he did send an intermediary to speak with the mayor, but that he did not offer a dollar amount to the mayor through that intermediary, as he suspected he was being set up in an extortion entrapment scheme.

Carmack's intermediary, who is also well known to the mayor and public, and spoke on the condition of anonymity, confirmed that Carmack did not ask for money.

And now things become interesting. Carmack excused himself through heavy breathing, knowing he was deep in the political weeds, and the state police where probably just minutes away from knocking on his door.

"Okay let me go, I gotta get my brain together."

Deadline Detroit has also learned that the mayor's alleged lover, whose condominium he was seen visiting multiple times in a Ford Taurus while wearing a ball cap and sunglasses, was not informed of the press conference until 10 minutes before the cameras began to roll. She declined comment through a representative.