LeDuff: Where's the Five-0? A Scary Night in Real Detroit

One gets the sinking feeling the so-called Detroit Comeback may have hit its ceiling. GM closing factories. Multiple federal grand juries convened over public corruption. Rumors of compromising mayoral videos and then the mayor's bizarre and hastily called press conference this week to cry that he is being extorted. The mayor called the police to complain. And the police answered. 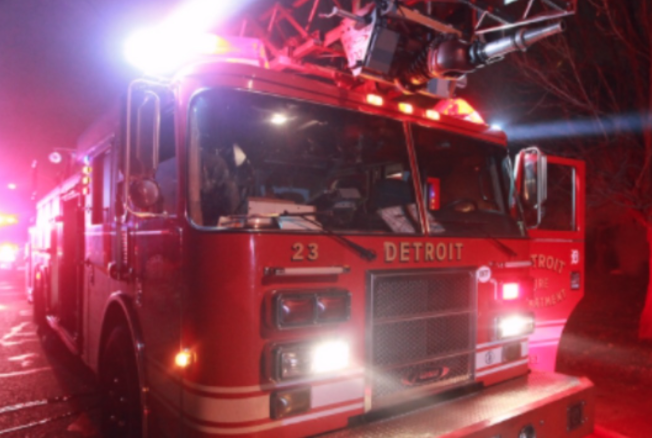 It doesn't always work like that in the other Detroit, where the police can't be found and homicide detectives work bankers' hours.

Consider it was 1:32 a.m. Friday, the west side of the city, a desolate patch near the intersection of Warren and Junction. A 911 call comes in to Central. An hysterical woman is on the line, something about somebody bleeding profusely. Fire Engine 34 and Medic 10 are dispatched, but told to stage a few blocks away until police arrive, as it is considered a dangerous scene.

But police are not notified for 10 minutes more. When the call finally does go out for an available scout car, there's no answer. In fact, there are only three crusiers working the 10th Precinct that evening, which consists of 11 square miles, and is considered one of the most violent quarters of the city. The comeback and the money have yet to hit the west side.

Meanwhile, the men of Engine 34 have arrived and come upon a van with both front doors and and the passenger sliding door open near the corner of Warren and Epworth. An hysterical woman is covered in blood. A man is seated behind the steering wheel with his brains in his lap and a bullet hole above his nose. His name was Tarrence Hill. He was on his way to the liquor store, and never made it. His seat belt is unfastened. It is doubtful the belt would have helped much, anyway. He is listed as homicide case #278.

It is now 1:50 am, and the captain of Engine 34 radios for police. Two men are lurking in the shadows; the men of 34 suspect the shadowy figures are involved in the homicide. (Listen to call by clicking here or to video at bottom of story).

"Stand by," the operator responds.

"We're gonna need DPD on the scene immediately," radios the captain. "This individual has been shot."

"Engine 34, you're reporting a shooting at Warren and Epworth. We'll get you a scout ETA."

"Engine 34 to Central. We still have suspicious civilians, on scene, stalking the area."

"Use extreme caution Engine 34. We're online attempting to get you ETA for police."

The men take cover behind the rig, near the hoses, afraid they'll be shot while waiting for the police. A man in the shadows keeps popping his head over a brick wall nearby. Another agitated shadow paces across the street.

"Engine 34 to Central, we do have a person of interest standing by."

'Unable to provide an ETA'

"We have passed that message by, we are still standing by with police," returns the dispatch operator. "Scout is en route. 34. They were unable to provide an ETA after multiple attempts."

A cruiser from a neighboring precinct eventually makes the scene at 2:12 a.m., 40 minutes after the original 911 call.

A high-ranking police official, speaking on the condition of anonymity in exchange for candor, put it this way: "This is how it is, Charlie. Everybody out here, the bad guys, the good guys, the police. We all know we don't have what it takes to police this city."

Mike Nevin, president of the Detroit Fire Fighters Association, speaking on the condition that his name be printed in broad, capital letters, put it this way: "It's absolutely outrageous. It happens every day. What's it gonna take, someone getting killed before we admit there is a problem? The mayor says there's nothing broken. But when a firefighter calls 911 and doesn't get immediate police response, what does it say about the public's safety? It's not the rank and file's fault. This is pure management."

It is no better with the homicide squad, one of the most overworked in America. The first dead-squad detective makes the scene at 4:45 am -- 3 hours and 13 minutes after the initial emergency call. A second homicide detective makes the scene at 6:40 a.m. -- five hours and eight minutes after the initial emergency call. They have to be summoned from bed, since Police Chief James Craig limited the homicide squad's working hours to 8 a.m. to 4 p.m. in a cost-saving measure.

By this time, the shadowy figures are long gone, perhaps having made it all the way to Kalamazoo, since the Greyhound bus can get you there in as little as 3 hours and 7 minutes. No arrests have been made.