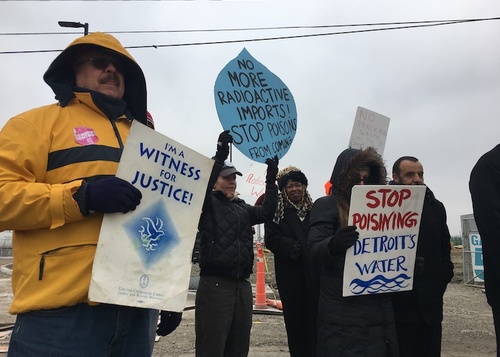 A coalition of Detroit and Hamtramck community leaders and public officials are urging action against a lame-duck bill that would increase by ten times the radioactivity threshold for oil and gas fracking waste allowed at Michigan landfills.

The changes reportedly mirror a 2014 request by U.S. Ecology, a company which takes in low-level radioactive waste from oil and gas fracking at its Wayne County facilities.

About two dozen activists and leaders protested outside the company's hazardous waste treatment plant in Detroit amid frigid temperatures Monday morning, waving signs and chanting “kill the bill” and “no radioactive waste.”

They warned that increasing the limits could create a Flint-like catastrophe, citing environmental violations uncovered at US Ecology’s Wayne County facilities by a 2014 Detroit Free Press investigation, including toxic leachate spills into surface water.

“We should not be the toilet for other states to bring radioactive waste and fracking waste to Wayne County, Detroit, Hamtramck, and potentially poison not just the ground and not just the water — but poison residents and citizens,” said activist pastor Reverend David Bullock, pointing to the densely populated community just beyond the bounds of the industrial area where U.S. Ecology’s Detroit facility is situated.

Isaac Robinson, the soon-to-be state representative for the district, noted that the EPA, which is still investigating TENORM, says the waste “can be a hazard to human health and the environment."

The community leaders urged the two dozen people who turned out for the protest to call their House representative and Gov.  Rick Snyder to urge them to reject the bill.

They also oppose a second bill put forth by Ann Arbor Democrat Sen. Rebekah Warren. Senate Bill 1195 would put a surcharge on TENORM being disposed of in the state in order to better equip MDEQ to monitor landfills taking in the radioactive waste. It would only apply if Senate Bill 1196 is adopted.