Update: Accused UM Music Professor Retires in 2019 and Must Avoid Students Until Then

School of Music, Theatre & Dance professor Stephen Shipps, who has been accused by multiple women of sexual misconduct over the past 40 years, will officially be retiring in May 2019, according to emails sent to his students and obtained by The Michigan Daily. . . .

The circumstances behind Shipps’s May retirement remain unclear.

The tenured professor, who came to the Ann Arbor campus in 1989, went on administrative leave Dec. 7 and is directed by Dean David A. Gier to avoid any student contact. "I will honor this requirement and I request that you do to [sic], as difficult as this may be," Shipps says in an email to stringed instrument students.

Until last Friday, Stephen Barnett Shipps was chairman of stringed instrument instruction at the University of Michigan

Now the 66-year-old music professor is on leave and under a cloud of sexual harassment and misconduct allegations by past students. "These reports span nearly 40 years, from fall 1978 to a university-affiliated summer program in the last five years," music student Sammy Sussman writes in a lengthy, extensively detailed article at The Michigan Daily.

They include accusations of unwanted touching, sexual assault, prolonged sexual relationships with teenage students, and misogynistic and sexist verbal statements. 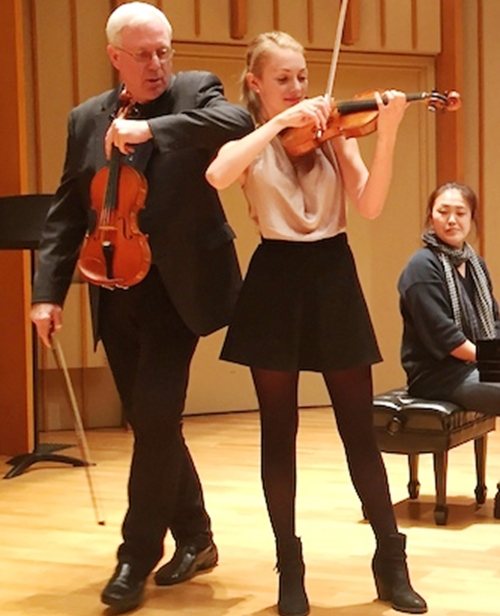 Stephen Shipps joined UM's faculty in September 1989 after teaching at the University of North Carolina. (2016 photo)

Shipps, a UM faculty member for 29 years, went on leave at the end of last week and stepped down as director of the Strings Preparatory Academy, a UM spokesperson tells the campus paper. That university-affiliated academy is for local middle and high school musicians.

The faculty member's absence is so abrupt that his five-paragraph biography and photo remain on UM's website. "He serves as . . . senior advisor to the dean for international study at the University of Michigan School of Music, Theatre & Dance," it says. The profile also mentions his violin recordings and earlier performing career with symphony orchestras in Cleveland, Dallas and Omaha.

A darker portrait emerges this week from the student paper:

An investigation by The Daily uncovered numerous previously undisclosed allegations against Shipps from his time at the university.

Sussman invited comments from Shipps and his lawyer, David Nacht of Ann Arbor, but they declined.

The undergraduate earns a shout Wednesday from Columbia Journalism Review for "an in-depth investigation."

One of his intrerviews is with an unidentified violinist at "a full-time professional orchestra," who recounts discomfort at the North Carolina School of the Arts (now part of the University of North Carolina), where Shipp taught for nine years before joining UM in fall 1989. She was "an international student assigned to Shipps’ private studio," Sussman writes.

By the end of her freshman year, she felt uncomfortable in Shipps' studio.

"There had been small things that I was uncomfortable with," she said. "I had heard rumors of flirting. I had seen flirting. … He had overemphasized my talent in master classes a number of times, held me up to other students. I was a freshman, so it was awkward." . . .

In one of her last private lessons, Shipps requested Meghan come see him after hours for her final private lesson. She had never had a late-night lesson before, but she agreed nevertheless.

According to her account, as she walked into Shipps’s studio that evening, the lights were dimmed. After she put down her violin, Ohe says Shipps moved behind her and locked the door.

He later tried to kiss her, the ex-student says.

"I was really uncomfortable and shocked and horrified. I didn't find him attractive. It was unwelcome contact." . . .

She remembers squirming away [twice], expressing her discomfort and packing up her violin. . . .

"To this day I think the man is a predator. . . . I was horrified to find out he'd gotten a second teaching position at University of Michigan." 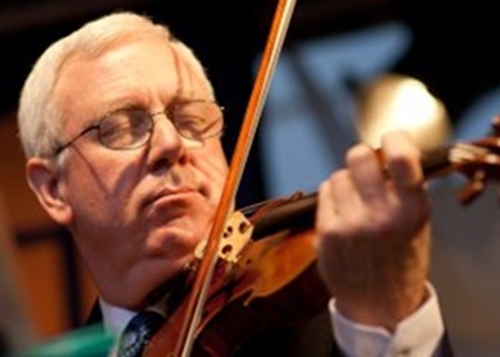 "I think the man is a predator," says a woman Stephen Shipps taught in the 1980s.
(UM photo by Jaroslav Sveceny Productions)

The Daily also spoke with multiple current and former staff and faculty members who spoke of misogynistic and sexist comments by Shipps during administrative and general faculty meetings.

In particular, one faculty member described an unforgettable instance in which Shipps made misogynistic comments about an adult woman with ties to the university. . . .

One former staff member who worked with Shipps in his administrative capacity . . . described being warned in her first days working with Shipps that she and other female faculty members should be careful around him. She was told to never be in a room alone with him and to leave the door open whenever she was in his office by herself.

She was also told to never allow Shipps to get behind her. . . . As she sat in Shipps’s office one day, he moved behind her and began massaging her shoulders. She immediately excused herself from the room. . . .

[The woman] also alleges she was aware of some female students switching out of Shipps' studio mid-year or mid-degree due to discomfort studying with him. The Daily spoke to other former faculty and staff members who repeated similar allegations.