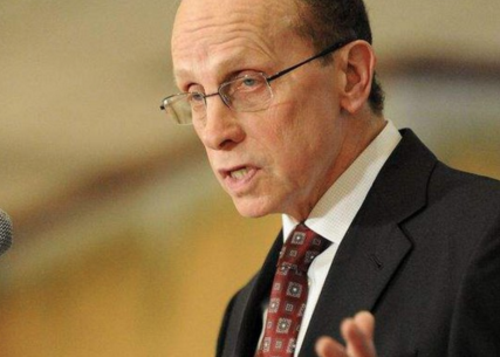 Warren Mayor Jim Fouts is claiming a report in Deadline Detroit of a secret recording of him referring to gay people as "fags" is phony, echoing the same thing he said of two previous  recordings in which he reportedly called black people the N word and compared them to chimpanzees.

He says it wasn't him.

Fouts spoke with the Free Press after Deadline Detroit obtained the latest tape. He claimed it was doctored by "political opponents" intent on undercutting him ahead of an election.

“I was a sent a copy of it, and it's clearly more of the same," Fouts told the paper. "It’s another phony, manipulated, manufactured, out-of-context — it’s just a phony tape."

He went on to use the occasion to highlight his accomplishments in the city as he mounts a 2019 re-election bid. And the Free Press dutifully shared details about a planned civic center and what Fouts claims is his high approval rating.

The latest recording disclosed Fouts referring to gays as “fags” and complaining that media efforts to reveal his true age were like being raped.

Fouts has repeatedly denied that other recordings of him making crude comments were legitimate, claiming that tapes leaked to the media in 2016 and 2017 were doctored or that they consisted of someone trying to imitate his voice. But a voice recognition expert last year concluded that the audio files were not edited and that the recorded voice matched the mayor’s voice.

As for Fouts' assertion that this is a pre-election attempt to undermine the leader of "the most successful city in the metro area" — we should point out the other tapes came out years ago. Fouts was last elected in 2015. He was first elected in 2007.

We should also note an inconsistency in Fouts' statement to the Freep: "Phony" and "out-of-context" don't mean the same thing.