Selweski: Price Tag For Fixing The Damn Roads? About $450 a Year For Typical Family 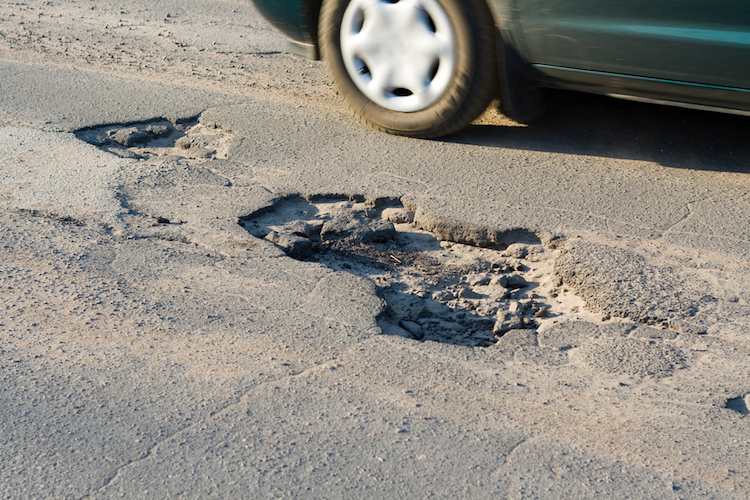 A coalition of former lawmakers on Thursday proposed a 47-cents-per-gallon gas tax increase, phased in over nine years, to fix Michigan’s deteriorating roads. The recently formed Michigan Consensus Policy Project (MPCC) released a report that concludes the price tag for repairing and rebuilding the roads is $2.7 billion a year, and that 47 cents per gallon is the only way to raise that kind of money.

“There’s no question there is a need. No question it’s important and … it’s got to be solved,” said Ken Sikkema, a Republican who formerly served as the state Senate Majority Leader, at a Lansing press conference. Some studies have rated Michigan roads, highways and bridges as the worst in the nation.

While the bipartisan group insists that its plan offers a dose of reality, motorists would feel a lot of pain in the pocketbook.

Under the proposal, the state gas tax would rise 7 cents in 2020 and a nickel more each year until it reached 73.3 cents per gallon, nearly triple the current rate of 26.3 cents. Unless other states followed suit, the increases would easily put Michigan atop the list of most expensive gas tax rates in the nation.

Michigan’s gas taxes currently rank sixth-highest among the 50 states, according to the Tax Foundation, a nonpartisan research group. The foundation puts Michigan’s levy at the pump at 44.13 cents, a figure that includes the state’s 6 percent sales tax charged on fuel purchases. Most states do not charge sales taxes on gasoline. In addition to the state taxes, a federal tax of 18.4 cents is imposed for each gallon of gas.

A refusal to ‘nibble around the edges’

The MPCC attempts to soft pedal the impact on motorists by comparing each incremental increase of 5 cents to the cost of a loaf of bread. Each additional 5 cents would cost the average motorist less than $1 a week; a loaf of bread costs about $1.59. Regardless of the cost of gasoline vs. bread, the ambitious proposal does not try to “nibble around the edges” – a common response to crumbling roads by lawmakers in recent years, according to the report.

The coalition’s estimate of an additional $2.7 billion needed each year for road rehabilitation roughly matches the price tag of $2.6 billion configured three years ago by former Gov. Rick Snyder’s 21st Century Infrastructure Commission. In this game of catch-up, the Legislature reluctantly approved a 7-cent gas tax increase in 2015 as part of a $1.2 billion-a-year road funding effort signed by Snyder in 2015. But the full $1.2 billion in new revenues will not be realized until 2021.

Conventional wisdom would tend to indicate that a 47-cent gas tax plan would be dead on arrival in the GOP-controlled Legislature.

Another key figure is former newspaper executive Phil Powers, who founded the Center for Michigan, a research/advocacy group with a centrist point of view. Several more members are being added and the MPCC will focus on other key issues facing Michigan in the coming months.

The coalition points out that Gov. Gretchen Whitmer’s “fix the damn roads” campaign theme became ubiquitous in 2018, regardless of the cost. Yet, the MPCC rejects a Whitmer campaign proposal to rely upon a state bonding project to pay for the roads. The new governor is expected to announce a road funding plan in March when she makes her first state budget proposal.

“It (bonding) is one of your less desirable options, because it ends up costing you more when you borrow the money and you have to pay it back with interest,” Emerson said at today’s press conference.

A challenge to offer an alternative plan

Sikkema said the MPCC proposal, at a minimum, serves as an effort to “jumpstart the conversation,” and he challenged critics to offer a sufficient alternative proposal. Even the eye-popping numbers proposed by the coalition would leave the state at a loss for funds -- more than $1 billion a year -- throughout much of decade of the 2020s.

From a Lansing perspective, it’s worth noting that nothing proposed in the Capitol recently has come close to fully addressing Michigan’s neglected infrastructure. While lanes on hyper-busy northbound I-75 were shut down in Oakland County twice over the past 10 days due to crumbling road pavement – several weeks ahead of pothole season – it became clear that promises of a road fix so far have proven to be a dead end.

For example, in 2018 the rather cutesy idea of “pot for potholes” was floated – a reference to Proposal 1, which successfully sought the legalization of marijuana. That voter-approved proposal taxes the sale of recreational marijuana and dedicates 35 percent of the revenues to roads. But that amount, when the proposal is fully implemented in 2022-23, will be an estimated $63 million.

That means pot bucks will pay for about 2 percent of the state’s overall annual road needs. Another sales pitch up in smoke.

If nothing else – and the 47-cent plan might amount to nothing – the MPCC has performed a public service. They have laid bare to the public just how incredibly expensive it will be to repair our state’s embarrassing road system without any gimmicks or snake-oil promises.