Lapointe: Newly relevant in Trump era, Woodward and Bernstein put on a show in Macomb 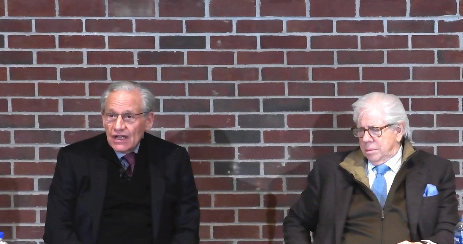 During her sometimes feckless questioning of the journalists Bob Woodward and Carl Bernstein Wednesday night in Macomb County, WDIV reporter Paula Tutman decided to share a little story about herself.

“So are we!” he said, delighting the audience.

As reporters for The Washington Post, Woodward and Bernstein broke the most significant “police” story in American history when they investigated the Watergate burglary in 1972. That political espionage led to the resignation of President Richard M. Nixon in 1974.

Young reporters then, Woodward and Bernstein of 2019 are venerable elders with white hair and long memories. And they are very much back in fashion during the presidency of Donald Trump, whose aides are going to prison -- just as all the president’s men did in the Nixon era.

While Woodward still cranks out book after book, Bernstein opines in great gusts of words on CNN and in Vanity Fair.

Despite the fuzzily focused questioning of the moderator, the two old pros blended enough polished anecdotes and snappy commentary on current events to entertain a capacity crowd at the Macomb Center for the Performing Arts on the campus of Macomb Community College.

'You're an effing liar!'

One of the stories drawing applause was Woodward’s account of why the lawyer John Dowd could no longer work for Trump after giving him a practice interrogation to prepare the president for questioning by special counsel Robert Mueller.

According to Woodward, Dowd soon learned that Trump made stuff up and flat-out lied.

“If you go testify, you’re going to end up in an orange jumpsuit!” Woodward said, quoting Dowd’s words to Trump. “You’re not a reliable witness. You’re an effing liar!”

The evening's conversation flowed best when Bernstein and Woodward engaged each other, finishing one another’s sentences and bantering about the time they first interviewed Trump three decades ago.

“Your sniffer is better than anyone in the world,” Woodward told his old partner.

That first interview with Trump took place in the mid-'80s, after Bernstein met the real-estate developer in New York and Trump told Bernstein, “Wouldn’t it be great if Woodward and Bernstein interviewed Donald Trump?”

“And you took the hook!” Woodward told Bernstein.

So they interviewed Trump and wrote about him but, alas, “we lost the tape,” Woodward said. (Perhaps Trump has his own copy? And, oh, if only Trump would consent to another grilling by these two.)

Somebody, please moderate the moderator

At its worst, however, the 90-minute show sagged when moderator Tutman tried to interject gimmicks and pointless questions.

She tried a “word association” game in which each man was to blurt a one-word response to a name or a phrase. Quickly and graciously, they steered her away from this.

When she read a long and tedious question from an audience member, Woodward lightened the mood by interjecting, “That question is by someone who is very angry.”

When Woodward showed emotion over last November’s 40-seat Democratic swing in the House, exclaiming, “That is a volcano!,” Tutman cut him off and changed the subject. Was she even listening?

When Tutman let him talk, Bernstein offered bromides of pithy wisdom for reporters that he often delivers on TV. Daily journalism, he said again, is “the best obtainable version of the truth.”

He also warned of how journalists can be spun.

“You can string together five facts and it’s not the truth,” Bernstein said.

Don't pre-judge or be pompous

He offered some optimism regarding online journalism, which is rapidly replacing the printed product that published their historic scoops.

“The internet is a great reporting platform,” Bernstein said, “better than print in many ways.”

Woodward also cautioned against snap judgments of people and events. He said he made that mistake with President Gerald Ford, who later convinced Woodward that he had pardoned Nixon not as a quid pro quo in a dirty deal, but as a sincere attempt to end the Watergate bitterness.

“What a cold shower,” Woodward said. “I was sure it was corruption.”

Finally, Woodward recalled a letter from Post publisher Katharine Graham after Nixon resigned. Among other things, Graham wrote to them: “Beware the demon `Pomposity.’”

Last night in Macomb, two of the three reporters on stage seemed to live by that rule.