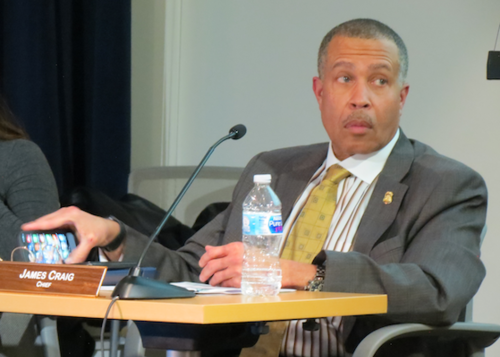 A white Detroit police officer suspended for mocking a black woman in a racist Snapchat video will continue to collect a paycheck as an investigation continues.

Detroit Police Chief James Craig did not recommend pay be withheld from Officer Gary Steele or his partner, Michael Garrison, at a meeting of the Detroit Board of Police Commissioners Thursday. Craig also did not request their firing, urging patience until the internal investigation wraps up about a week from now.

“I know there has been a loud outcry to fire them immediately, but I have to follow union rules,” he said, noting that any firing without a full investigation would likely be overturned in arbitration.

Officers Steele and Garrison were recorded mocking a young black woman as she walked in subzero temperatures last week, muttering "priceless," "walk of shame," and "bye Felicia." Steele posted video of the incident to Snapchat with the stickers "what black girl magic looks like" and "celebrating black history month."

Rep. Sherry Gay-Dagnogo (D-Detroit), the Detroit Coalition Against Police Brutality and others have called for Steele and Garrison’s firing. DCAPB said a suspension without pay would be appropriate in the interim.

“The chief has to send a message that racism will not be tolerated,” said DCAPB’s Chris White. “But historically he has not been one to deal with issues of race in the department.”

Criticism of Craig’s leadership on racial issues dates back to before he was Detroit police chief. As head of the Cincinnati Police Department, Craig received a vote of no-confidence from that city’s minority police officers’ union in 2013 for failing to “level the playing field” for black officers in a “historically lopsided disciplinary, promotional and assignment process.”

In Detroit, Craig established a Committee on Race and Equality to examine racial issues in the department after some racially insensitive posts by white officers in 2016. But when the committee discovered inequities in the majority-black department and "racism that ... trickles down from command officers to the rank and file," Craig dismissed the findings as based on “rumor and innuendo” and temporarily suspended the committee with the goal of re-working it.

While the committee still exists, it's unclear what role it plays in the department or if any of its initial recommendations were implemented. We were unable to immediately get in touch with a representative from the department to learn more.

“There’s been a desire on his part to look the other way and act like these things don’t exist, and it’s only going to get worse,” said retired Detroit police officer John Bennett, who co-chaired the committee. “When you don’t react the way you should to incidents like these, it’s going to embolden these people to think nothing will happen to them.”

The Board of Police Commissioners also did not make an effort to suspend Steele and Garrison without pay Thursday. In a text message, Chairman Willie Bell cited "ongoing investigation by chief."

Such suspensions are rare. Last year, Craig moved to suspend without pay an officer who was seen on video repeateldy punching a mentally ill woman at Detroit Receiving Hospital, but the board voted against it. In 2017, two officers accused of covering up a deadly high-speed chase were suspended without pay.