Detroit Will Spend Millions to Expand its Surveillance Program. Is it worth it? 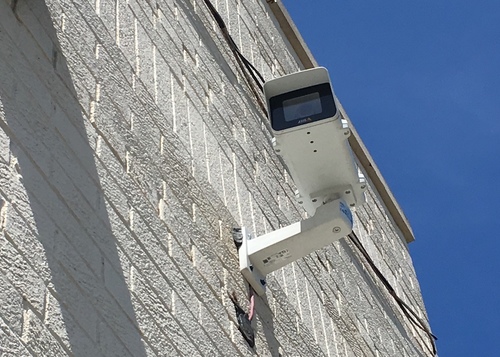 A plan to dramatically expand Detroit’s real-time surveillance camera network using millions in public money is reigniting privacy concerns and questions of whether the cameras have helped reduce crime like the city says.

The plan unveiled by Detroit Mayor Mike Duggan during this month's State of the City would link 500 traffic cameras to the Project Green Light system — a major ramp up for the 3-year-old program, which just saw its 500th private business sign up. It also involves a significant infusion of public money for a program whose costs have primarily been shouldered by private businesses.

The city will spend $3 million in bonds to set up the first round of roadside cameras and two additional mini Real Time Crime Centers — locations where surveillance footage is streamed. An additional $9 million in federal and state transportation funds will go toward putting 400 cameras with streaming capabilities at intersections throughout the city. The cameras are designed mainly to monitor traffic trends, but police will be able to access the footage when it's deemed valuable for solving crimes.

For Duggan, it’s a cheap way to expand a program he credits with reducing crime and helping Detroit police catch suspects.

“If you're engaged in a shooting, you’re engaged in a carjacking, we’re going to track you … we will get shots of the perps as they go passed and we’ll be able to chase them down," he said during his State of the City. "We’re going to make people make different decisions of what they’re gonna do.”

But Eric Williams, an attorney working with the ACLU on the issue, questions the surveillance program's effectiveness.

“It seems irresponsible to dedicate money to something that is unproven when there are obviously other ways this money could be spent to improve the lives of Detroiters," he says. "There's too many questions surrounding the program as it currently exists to justify such a rapid expansion of the programs capabilities: We don't know that it works and we don't have specific criteria in place for use of the footage.”

A 2011 Urban Institute study of various cities' surveillance systems found they were effective only when the cameras were highly concentrated and routinely monitored. But that's not the case in Detroit, where fewer than a dozen people — police and civilians — monitor more than a thousand camera feeds from across the city at any given time.

Crimes continue to occur at some Green Light partners despite strobing green lights and ample signage letting criminals know they're being watched. Detroit police have also never publicly credited the streaming technology with helping them stop a crime in progress.

The city claims violent crime to date is down nearly a third at all participating locations compared to 2015, but it's unclear how it came to that average considering some businesses only recently signed up for the program. A separate look at businesses that joined Green Light in 2017 found an 11 percent decrease in violent crime compared to the previous year. But researchers have questioned the validity of even that data. They say a clearer picture of Green Light's impact on crime requires measuring crime levels at longtime participants against similarly situated businesses that are not enrolled in the program.

The effect of the surveillance component of Project Green Light is particularly difficult to measure because the program includes a number of variables that have been shown to drive down crime on their own. Green Light participants are required to have adequate lighting. They also receive regular police visits and have all their emergency calls automatically elevated to priority 1 status.

Michigan State University researchers, who are examining the program in its totality, have preliminarily found that Project Green Light is responsible for a small to moderate decrease in property crimes at partner locations, and that its impact on violent crime is unclear. The improvements, however, cannot be attributed to the cameras directly, researchers say.

No Proof of Violent Crime Drop

“There's a lot of evidence that the police department is stepping up police patrols around these businesses,” says Giovanni Circo, an assistant professor at the University of New Haven and co-investigator on the MSU study. “The key question is, is Project Green Light reducing violent crime? And at this point, based on the first 86 or 87 business partners we examined, we don't have a lot of evidence to suggest there's been a decrease in violent crime and that’s actually consistent with a lot of studies that have looked at closed circuit TV cameras and their effects on violent crime.”

The city hopes the traffic surveillance cameras — which won't come with the added public safety benefits businesses get — will not only deter crime, but help catch criminals. At a news conference announcing the 500th Green Light partner, it pointed to three instances in the past year when the high-def footage from Green Light cameras helped identify and locate suspects.

It’s not clear how frequently this happens, however. When pressed by Deadline Detroit last week on how many crimes Project Green Light has helped solve, Detroit Police Chief James Craig could only say it was "definitely not hundreds.”

The lack of conclusive evidence around Green Light's benefits has prompted civil liberties advocates and now Detroit city councilmembers to question whether the program is worth the public cost. More than $8 million in public money has already been spent on the program, in addition to the $4,000 to $6,000 plus monthly fees that each business pays to participate.

Councilmembers Raquel Castaneda-Lopez and Mary Sheffield expressed skepticism over the surveillance program during Duggan's budget address this month, citing the possible consequences for communities of color. For example, the cameras are equipped with facial recognition technology, which has been shown to disproportionately misidentify brown people.

“We know nationally that simply adding cameras doesn’t necessarily statistically reduce crimes if you factor in everything else, and my big concern is we have already got complaints from folks in the immigrant community and the Latino and African-American community of feeling the sense of being over [surveilled],” Castaneda-Lopez told Duggan. “If you look at studies done nationally by the ACLU, there tends to be an abuse of [surveillance technology] if there’s not clear legislative guidelines about how that information can be used.”

Sheffield is putting together a proposal to limit who can access the footage and how long it's stored. The city says so far only the Detroit Police Department is using it, and Project Green Light's memorandum of understanding with its business partners suggests the footage is stored for 30 days.

But the public investment could be worth it, Circo says, if the technology helps catch high-level serial offenders.

“If Project Green Light helps solve really serious crimes as opposed to minor thefts, then that’s potentially something really valuable,” he says. “The research shows that a large proportion of crimes are committed by a small number of people, so if you can ID serial offenders and get them off the street that has potential cost saving attached to it.”

Of course, for that benefit to be determined, the public needs the appropriate data.

Detroit police asked Deadline Detroit to file a Freedom of Information Act request for the number of crimes Green Light has helped solve. We'll supply that information when and if it becomes available.