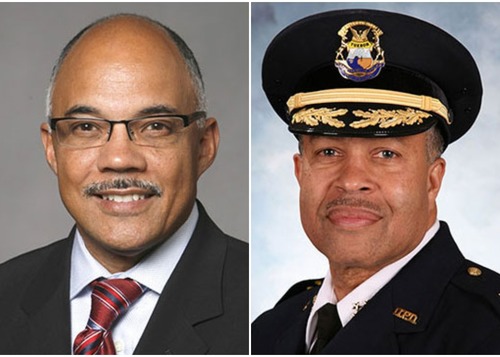 Agnes Hitchcock, the Detroit activist you may remember for throwing grapes at a school board member who sought to close dozens of schools in 2007, is back in the news with a controversial protest of new targets. Hitchcock, through her group the "Call 'Em Out Coalition," has given "Sambo Awards" to Detroit Police Chief James Craig and Detroit Water and Sewerage Department director Gary Brown.

Sambo — as in the racist slur for a loyal black servant.

The awards were issued last week at a dinner honoring former Detroit Mayor Coleman A. Young, The Detroit News reports. Their recipients call them racially offensive.

Hitchcock is black. She tells The News Craig and Brown deserve the recognition because they run departments that have failed the city's black community:

When Hitchcock was told Brown and Craig were insulted by the award, she said: “This was a celebration of Mayor Coleman Young’s life. He came into office when (police) were killing black men all over the city of Detroit. Today (Craig) lords over a police department that’s only 55 percent black and dropping, so he deserves that award.”

Hitchcock said of Brown: “I’ve lost count of how many times the water rate has increased in Detroit. Gary Brown could use some more awards.”

Brown has also presided over an ambitious water shutoff program that has cut service to tens of thousands of Detroit households since 2014. He's apparently a two-time recipient of the award; The News reports he was also dubbed a "Sambo" while on city council in 2013.

Craig tried to frame the award as more debasing than last month's 'bye Felicia' incident — where two cops  impounded a young black woman's car for expired tags, then allowed her to walk home in single-digit temperatures while they filmed and ridiculed her in a Snapchat post, adding the captions "celebrating black history month" and "black girl magic."

“Even Steele and Garrison didn’t call black people ‘Sambos,’” he said. “As someone who has faced discrimination from other black people because of my light complexion, I can tell you: I don’t care if it’s coming from the mouth of a white man or a black man — racist is racist, and I’m going to call it out when I see it.”