Is reviled Breakthrough Towing operating in Detroit under a new name? 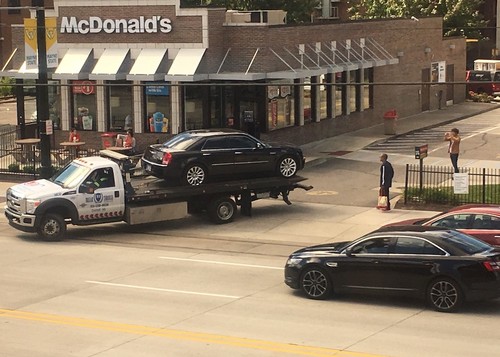 Breakthrough tows a car from the McDonald's on Woodward in Midtown. Customers have accused the company of taking their cars while inside the restaurant. (Photo: Violet Ikonomova)

One of Detroit's most reviled towing companies no longer has license to operate in the state of Michigan — but is it still working in disguise?

That's the question posed by Fox 2's Rob Wolchek in his latest report on Breakthrough Towing, a company whose alleged predatory practices last year drew a barrage of negative media coverage and a class action lawsuit. The Better Business Bureau amplified complaints, and Triple A and Midtown businesses cut ties with the company. Breakthrough didn't renew its business license this year.

But the company doesn't seem to have gone away completely. Wolchek's report suggests it may have simply rebranded as Magic Towing.

Breakthrough and Magic's owners deny this, but Wolcheck provides plenty of clues that the companies are linked. With help from accounts provided by people recently towed by Magic, he finds:

The eight-minute piece below is a Detroit TV masterpiece and very much worth a watch. The best (or worst) part is that Magic, just like Breakthrough, is employing the same clumsy and apparently predatory practices that got Breakthrough its bad rep.

Wolchek shows Magic towing with help from what seems to be a spotter and recounts an incident in which a tow truck driver crashed into the vehicle of someone he was supposed to be coming to help.