Here's a solid reason to feel optimistic about the future of Detroit Tigers' pitching:

Casey Mize, signed by the team last June as the first overall draft pick, threw a no-hitter for the Erie SeaWolves in his Double-A minor league debut Monday night. Seventy of his 98 pitches were strikes. 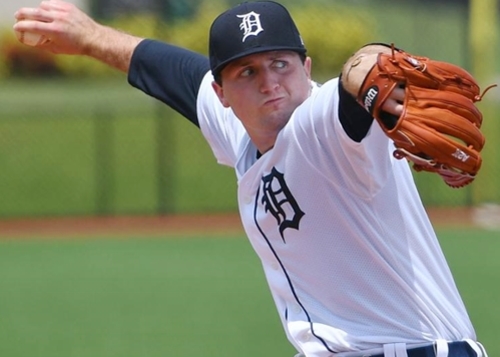 "I just felt like on autopilot," says Mize (pronounced my-ZEE) says in a video tweeted by his team after Monday's game. "What a night!!" he tweets at his feed.

He struck out seven batters and allowed just two base runners -- a hit batter and a walk -- in the 1-0 win over the Altoona Curve in Pennsylvania. At one point, he retired 19 batters in a row, reports Tony Paul of The Detroit News.

Detroit drafted the 21-year-old right-hander from Springville, Ark., after he showed impressive skills at Auburn University. "His split changeup is viewed as one of the best pitches in the country," according to Max Bultman of The Athletic.

Here's how three sports journalists react to his perfect game:

A Tigers fan tweeting as @MisterCooper may speak for many when he posts: "Bring up Casey Mize tonight."

The team itself goes with this: