This article is slightly updated from an April 30 preview.

Products labeled "Made in Detroit" now include wine, which was poured during a 13-hour opening event Friday at Detroit Vineyards on Gratiot Avenue near downtown. 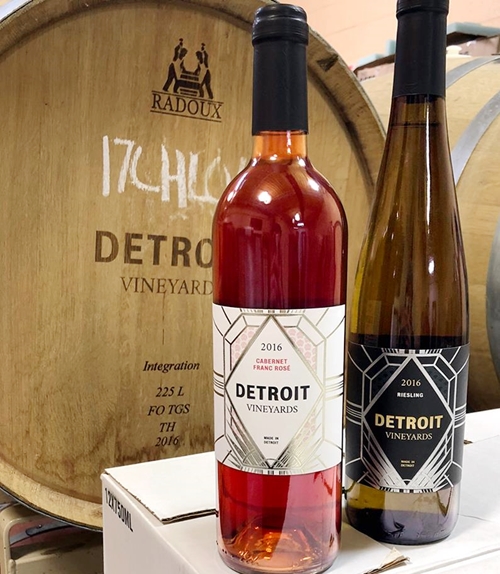 Two of the four varieties offered.

The five-year-old maker of wine, mead and cider moved from a small facility on the lower east side near Mt. Elliott Street to a space 10 times as large between Eastern Market and Lafayette Park. It's in Stroh's former ice cream factory at 1000 Gratiot Ave.

Results of a tasting room buildout and other renovations that took a year are on view. Visitors can try a $10 wine flight with five one-ounce samples, plus pints of cider and mead for about $7 each.

The first vintage, bottled in 2016 at the initial site, is ready for sampling and sales this week. A 2017 vintage was produced last fall at the 12,000-square-foot new location, Brenna Houck writes at Eater Detroit.

"Our wines tend to be higher in natural acidity [than those from California], which makes them much more food friendly," winemaker and vineyard manager Blake Kownacki tells Eater's editor. He hopes to produce 10,000 cases this year for distribution locally and beyond. They're already sold at House of Pure Vin downtown Detroit and served at Supino Pizzeria in Eastern Market.

The company is also producing mead from Michigan wildflower honey, cider, and blends such as pyments and cysers. Cider will only be available on tap in the tasting room. 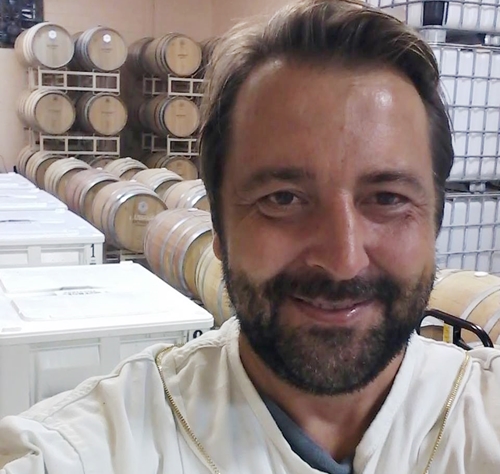 Co-founder Blake Kownacki trained in Australia and was a winemarker in Marshall, Mich.

Kownacki, a Metro Detroit native, founded Detroit Vineyards in 2014 with Claes Fornell, a retired University of Michigan business professor and 2009-14 member of the Michigan Grape and Wine Industry Council, a promotional group. Fornell started a small vineyard where he lives in Dexter.

Kownacki has been a winemaker at Veritas Vineyards in Marshall, Mich., and at Cherry Creek Winery in Brooklyn, Mich. He trained in Australia "under renowned winemaker Philip Shaw," Houck writes.

The 3,000-square-foot tasting area, open daily, has room for 120 people. Houck gives a preview of the industrial-style space:

The room includes several of the non-functional pieces of equipment from the former ice cream factory. A long rectangular bar surrounds an old sump pump and a window into the wine-making area. Another window looks into the temperature-controlled barrel room where ice cream used to be stored for shipment.

"I tried to keep as much of the old Stroh’s Ice Cream facility intact," Kownacki says.

"Stroh's was really the perfect fit for a conversion into a winery," the winemaker says in a Detroit Metro Conventioin & Visitors Bureau interview. "My dream is finally coming to fruition." 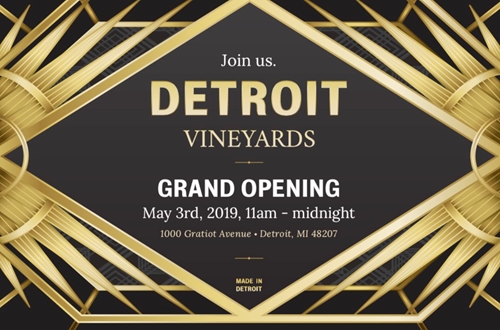