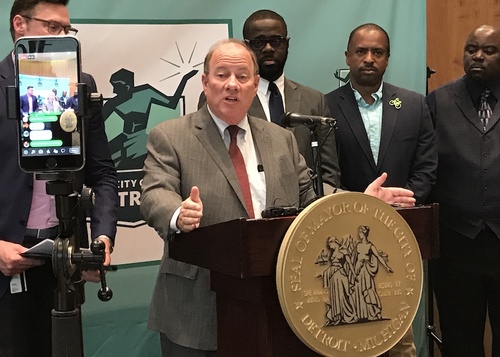 Duggan announces the city has pulled off the land swaps needed to unlock a $2.5 billion investment from FCA. (Photo: Violet Ikonomova)

Detroit Mayor Mike Duggan announced Friday that the city had accomplished the daunting task of acquiring 215 acres of land necessary for Fiat Chrysler's plan to build an assembly plant on the city's east side.

The total payout for the acquisitions was $108 million, with the city paying $51 million and the state covering the rest. Duggan said Detroters would get first shot at the jobs.

The agreement was reached just after the 60-day deadline set by FCA. It's expected to bring the city $2.5 million in investment and 5,000 jobs.

“This simply would not have been possible without the faith that FCA’s CEO Mike Manley placed in the people of Detroit, the tremendous support of the State, and the cooperation of the property owners who understood the rare opportunity this represents for our city and worked with us throughout this complicated process,” Duggan said in a media release.

An 82-acre parcel owned by the Moroun family's Crown Enterprises was the most difficult piece to obtain, Duggan said. The city paid $44 million and gave the Morouns an additional 117 acres of land elsewhere in the city. Crown had a 9-year, $3 million per year lease with FCA, which kept cars on the site.

"The negotiation with the Morouns was very different because they had an major income-producing property and we had to strike a different kind of deal," said Duggan. "It was an encourmsoyly complex deal that also involves the Morouns building more employment centers for FCA that will also benefit east siders and those details will be coming."

Other land holders, some of them known to be speculators, swapped land with the city for free. Nearly 56 acres of land for the plant expansion were already city owned. DTE was the third-largest land holder in the area. For its 41 acres of land, it was given 25 acres elsewhere.

FCA will receive $160 million in tax incentives for the project. Duggan said protections are built into the deal that will ensure the city recovers the promised revenue.

"We’ve had instances in this city where people say promises haven’t been met, and in this case [our investment] has been protected."

The automaker has also struck a community benefits agreement with residents who live near the site. Its terms include more financial incentives from the city and state. They include the demolition of 300 homes in the area, a $5.4 million investment to be covered by the city. About half a million dollars will be set aside for the rehab of homes owned by the Land Bank. FCA will cover $2 million on home repair grants of up to $15,000 each. The stat ewill invest $6 million in job training programs that help ensure Detroiters get hired by the plant.

Detroiters will have a two-week window in which they can apply to work their before other current FCA amployees.