A third of Detroit's new streetlights could soon burn out, city lawsuit says 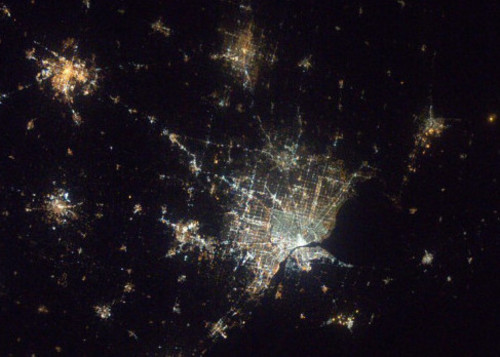 In 2017, Detroit shined bright after the installation of 65,000 LED streetlights. (Photo: NASA)

The relighting of Detroit is a key thread in the city's turnaround narrative. Detroit, once dark, was able to secure $185 million to install 65,000 new LED streetlights after its 2014 bankruptcy. But now, just a few years later, a third of those lights are reportedly at risk of burning out.

The Detroit News reports the city's Public Lighting Authority has filed suit against Leotek Electronics, the manufacturer of a portion of the lights, alleging the lights are "prematurely dimming and burning out," and that it expects a "system-wide failure" of Leotek's lights "in the short-term." Repairs are expected to cost millions.

The News reports the issue was discovered last fall, and since then, Leotek has stopped cooperating with the PLA.

Defective LED units were either “charred, burned, or cracked,” according to the lighting authority’s law firm.

The California-based manufacturer acknowledged in a December letter to the lighting authority that it had experienced "a higher number of reports of failures" in models dimming city streets, primarily in west side neighborhoods and a number of Detroit's major thoroughfares.

In the Dec. 17 letter, Leotek administrator Hy Nguyen said the company had determined "the problem is excessive heat that can burn the lens directly above the LED."

"We apologize for the problem you have experienced and will work with you to correct the problems," Nguyen wrote.

But in recent weeks, Leotek officials have gone silent, according to the lighting authority. A representative for Leotek did not respond Monday to requests for comment.

The lights were supposed to last at least 10 years.