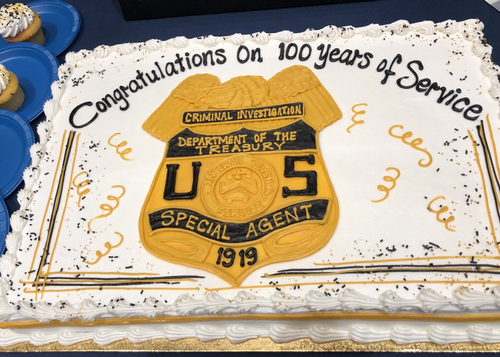 Federal law enforcement has its superstar agencies -- FBI, represent -- and its less-flashy ones -- hey there, ATF and DEA -- but if you want the G-men (and G-women) who will never be played in a movie by the matinee idol of the moment, then you want the Internal Revenue Service Criminal Investigation. In "The Untouchables," handsome Kevin Costner played Eliot Ness and devastating Sean Connery was the Chicago cop, but the IRS guy was full-on nerd Charles Martin Smith, in glasses and too-big clothes, trailing behind the cool dudes with a ledger, suggesting maybe Al Capone could be brought down not with guns and badges, but by his own failure to file tax returns.

Smith's character didn't survive the movie, but guess how they brought down Capone? Read your history. 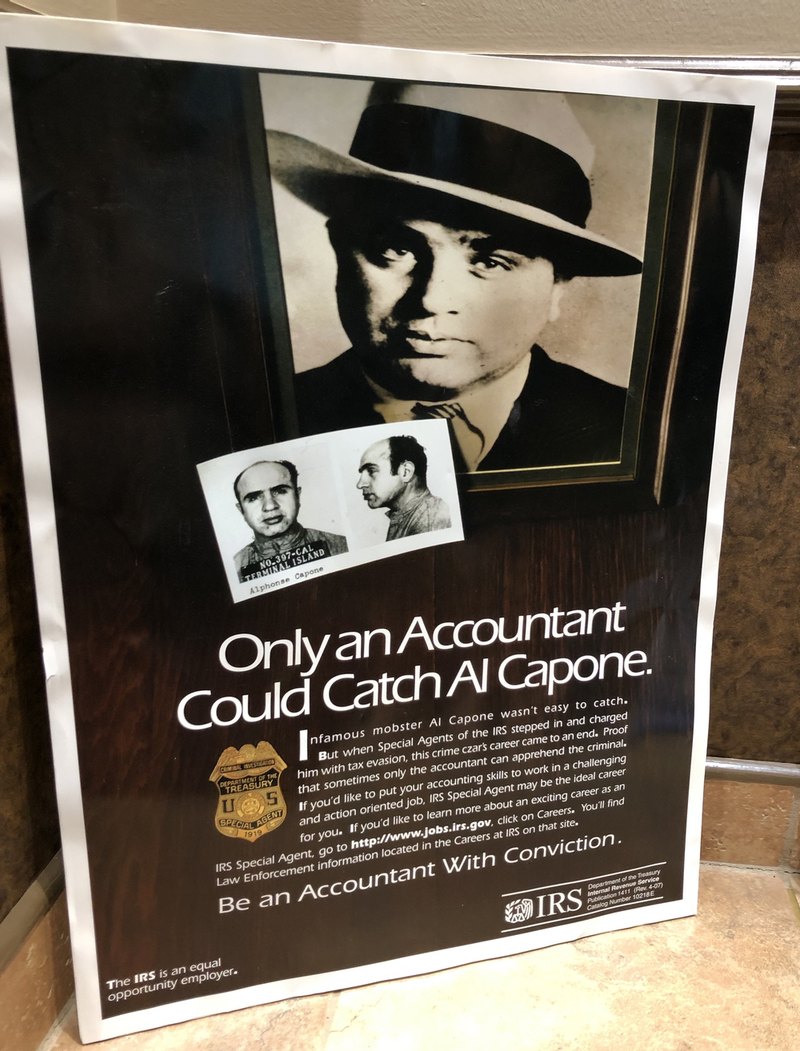 Maybe you're good enough to be in the IRS, young CPA. (Photo: Nancy Derringer)

IRS Criminal Investigation, the formal name of the agency's intelligence arm, celebrates its 100th birthday this year. On Friday, about 50 current and retired agents, U.S. attorneys, judges and others came together at the federal courthouse downtown to mark the occasion. It started early for a birthday party -- 8:30 a.m., with doors opening a half-hour earlier, for those who simply couldn't wait -- but it was a fascinating half-day that would leave any observer with a new respect for these cop-accountants, who have been instrumental in countless criminal cases, including the downfall of Mayor Kwame Kilpatrick and Detroit Police Chief William Hart.

IRS CI has brought down mobsters, drug traffickers and miscreants up and down the cell block. Bottom line: It's hard to catch a criminal holding a smoking gun, but a good forensic accounting can reveal all sorts of crimes. And a Social Security number is easier to collect than DNA evidence.

We owe it all to the 16th amendment

Co-emcee Donald Davis, former U.S. Attorney for the Western District of Michigan, kicked things off with a funny mix of history and high-mindedness. Yes, the first 1040 was only a page, as were the instructions. No, he doesn't feel good about writing that check on April 15, but "taxes are the dues we all pay for a civilized society." And then there was an extended bit about tax protesters, a particular species of anti-government loon that Davis tangled with often in West Michigan.

"Tax protesters think the jury is going to rise up and overturn the 16th amendment," Davis scoffed. "But the jury is more likely to think, 'I paid, and you are going to, too.'"

The very phrase "tax protesters" inspired a lot of eye-rolling. Davis said it's a rule in the agency that they never be called by that name, for fear that the government could be seen as cracking down on a form of speech. But tax protest is accompanied by a very specific behavior -- not paying taxes -- and like many forms of protest, refusing to pay taxes can be a gateway drug to other anti-government activities, many of which involve violence.

Besides, Davis has left the government's employment. He can say what he wants.

Davis was followed by other history presentations -- on the various Detroit mobsters who stole, extorted and money-laundered their way into infamy, many of whom finally fell, like Capone, to a thorough IRS investigation. Matthew Schneider, the current U.S. Attorney for the Eastern District of Michigan, briefed the group on the rogue's gallery of Detroit mayors who did the same.

One, Richard Reading, aka "Little Dick," was so enthusiastic in his acceptance of kickbacks from mobsters that he cleared nearly a million dollars of skim in a single year. After his conviction, he was said to splutter, "This is the greatest injustice since the crucifixion of Christ."

The root of all evil

More war stories followed, of tax-preparation scammers who set themselves up behind names like Integrity Tax, of number-fudgers who collected millions in excise-tax refunds using wildly inflated figures, of every knucklehead who tried every trick in the book to get out of paying their civilized-society dues. And yes, Kilpatrick's name came up a time or three. 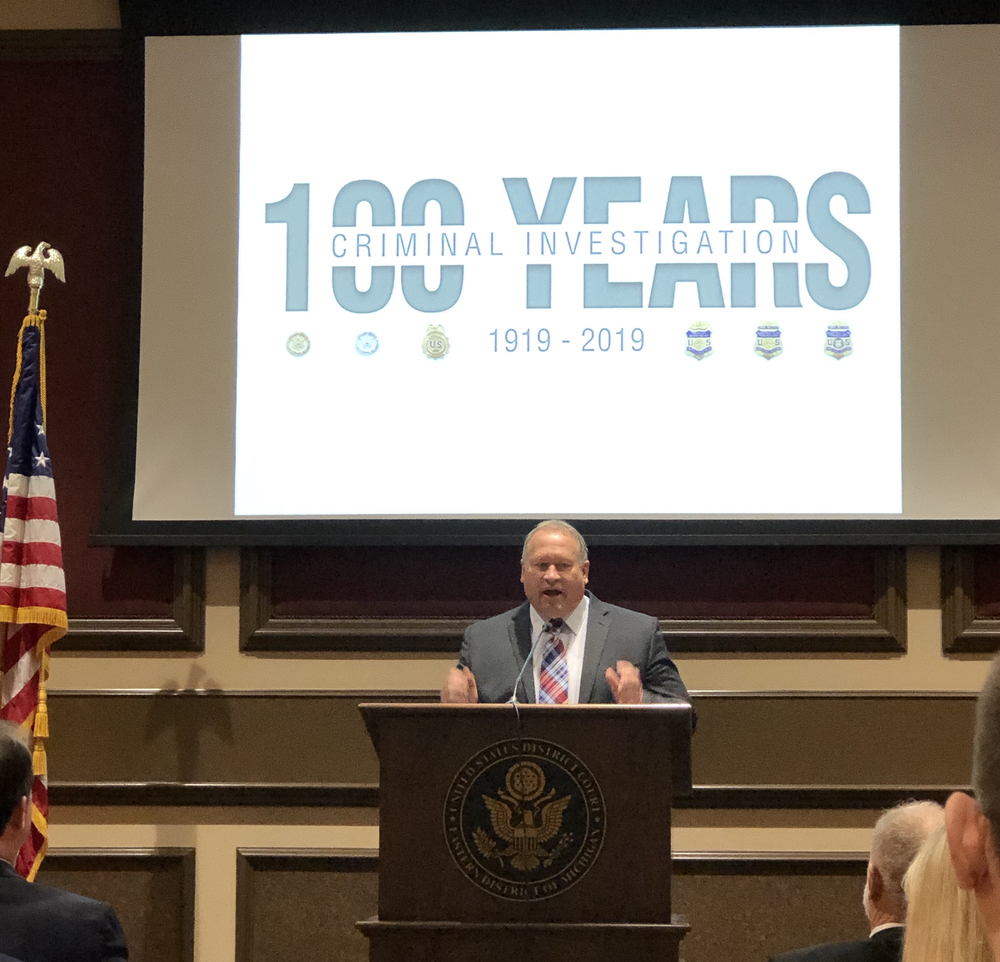 Money is the universal solvent in American culture, the way we keep score, the bills we peel off to show our love and appreciation. It's the cheddar, the cabbage, the Benjamins, the dough, the dolla dolla bills, y'all. So it's not surprising that so much wrongdoing in this country runs through this agency of accountants, their noses pressed to spreadsheets, tracing money as it soaks into every corner of this country, in both legal and illegal ways.

The IRS ensures that Americans can "have confidence in the system," said Steve Moore, a retired public-information officer for the Detroit branch. Without confidence that the system works, or at least that the enforcement of that system's laws work, no one would pay taxes, after all.

One name remained unspoken for the entire three-and-a-half-hour event, that of the president of the United States, the first one in decades to not share his tax returns, and who has been credibly found to have played fast and loose with tax law, stretching it to its limit and perhaps into territory agents like this would love to investigate. "We're not going there," said Moore, when asked. Davis offered a what-can-you-do shrug.

And all of these agents still on the job work for him, ultimately.

One takeaway an observer might have come away with: Some of the tax cheats in recent history slipped the noose a time or two before ultimately being ensnared. The arc of history is long, but it bends toward justice. And the IRS wins, quite a bit.